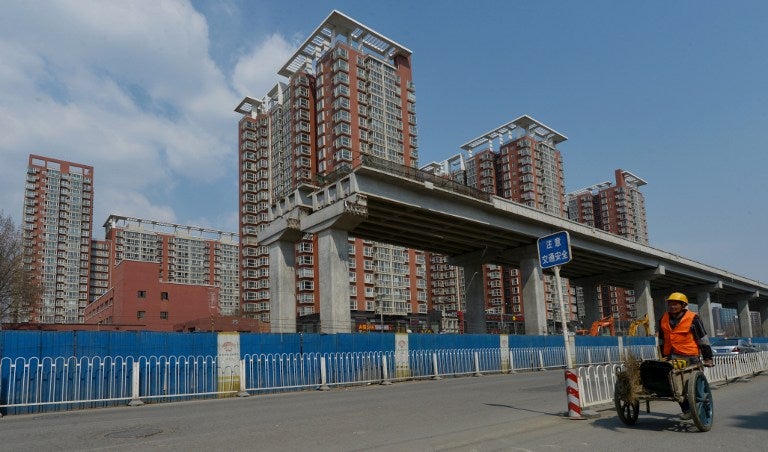 A Chinese worker walks past a new property development in Beijing on April 1, 2013. China’s richest man, real estate magnate Wang Jianlin, has warned the country’s property market is the “biggest bubble in history” — the latest alarm bell to be sounded on the faltering giant economy. AFP PHOTO

Wang, the owner of real estate and entertainment conglomerate Wanda, said property prices continue to rise in the country’s big metropolises but fall in smaller cities, which are saddled with huge inventories of unsold new homes.

“I don’t see a good solution to this problem,” Wang, whose group owns more than 200 malls, shopping complexes and luxury hotels across China, told CNN in comments published on its website.

“The government has come up with all sorts of measures — limiting purchase or credit — but none have worked.”

Real estate is a key sector in China’s economy, the world’s second largest and a vital driver of global growth.

However, the stumbling property market, combined with a sluggish manufacturing sector and mounting debt, has hit growth, which last year came in at its slowest rate for a quarter of a century.

Concerns about China’s growing debt mountain led a global central bank watchdog to earlier this month issue a warning that the country’s banking sector is facing an imminent crisis.

The Bank for International Settlements (BIS) — dubbed the central bank of central banks — said a gauge of Chinese debt had hit a record high in the first quarter of the year.

While Wang said he was not worried about a hard economic landing, he said: “The problem is the economy hasn’t bottomed out.

“If we remove leverage too fast, the economy may suffer further. So we’ll have to wait until the economy is back on the track of rebounding — that’s when we gradually reduce leverage and debts.”

In recent years, Wang has shifted his company’s focus from property to services and the culture industry as profits wane in Chinese real estate.

Wanda is currently in talks to ramp up its push into Hollywood with the acquisition of Dick Clark Productions, the company behind the Golden Globes, the US firm’s parent company said Monday.

The move would follow Wanda’s high-profile, $2.6 billion acquisition of US cinema chain AMC Entertainment in 2012 and its $3.5 billion purchase of Hollywood studio Legendary Entertainment in January. CBB