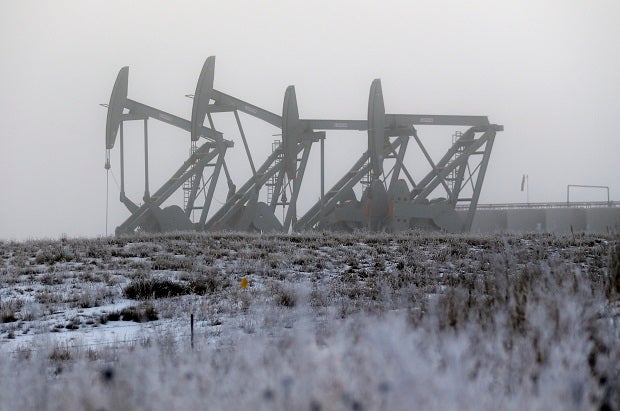 In this Dec. 19, 2014 photo, oil pump jacks work in unison on a foggy morning in Williston, North Dakota. Traders have been drawn into a guessing game as hopes and doubts mix amid talk of an output freeze by Russia and Saudi Arabia. (AP Photo/Eric Gay)

A barrel of West Texas Intermediate for October delivery rose 39 cents to close at $44.83 in New York.

But North Sea Brent closed 37 cents lower at $47.26 per barrel for November delivery on the Intercontinental Exchange in London.

On Monday prices surged after Russia, which is not an OPEC member, and Saudi Arabia pledged to cooperate in steadying prices even though officials from the two countries said they saw no need to freeze output.

However the foundations of such a prospect appeared to weaken Tuesday. In a statement published by OPEC, Iranian President Hassan Rouhani said it was “vital” for Iran to regain its pre-sanctions production levels even though his country supported any OPEC efforts to restore global price stability.

“You can see how the market is headline-driven after the last day or so of trading,” said Gene McGillian of Tradition Energy.

“All the reports about a possibility of some agreement had the market rocking higher… Then we were, ‘What if there really is no agreement?’ We came right back where we were.”