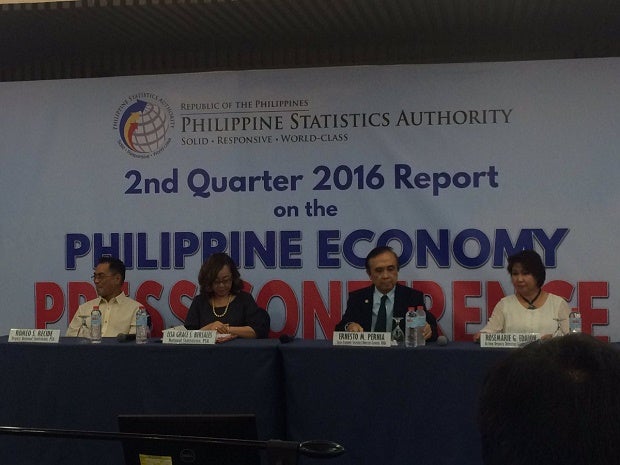 DAVAO CITY – The Philippine economy grew 7 percent during the second quarter, the last three months of the Aquino administration, amid robust spending for the national election held last May, the Philippine Statistics Authority announced Thursday.

The growth posted during the April to June period was faster than the 5.9 percent posted a quarter ago as well as 6.8 percent in the first quarter.

The Duterte administration targets the GDP to grow by a “conservative” 6-7 percent in 2016, as economic managers had downscaled the Aquino administration’s target of 6.8-7.8 percent growth for this year, citing adjustments to be made in the next few months as the new administration settles down.

Finance Secretary Carlos G. Dominguez III had said the Duterte administration wants the robust economic growth being enjoyed by the country—the average GDP growth during the Aquino administration was the fastest since the late 1970s—to be felt in terms of poverty reduction.

President Rodrigo Duterte’s economic managers earlier said they want the poverty incidence to drop sharply to about 16 percent by 2022 from about 25 percent at present. CDG