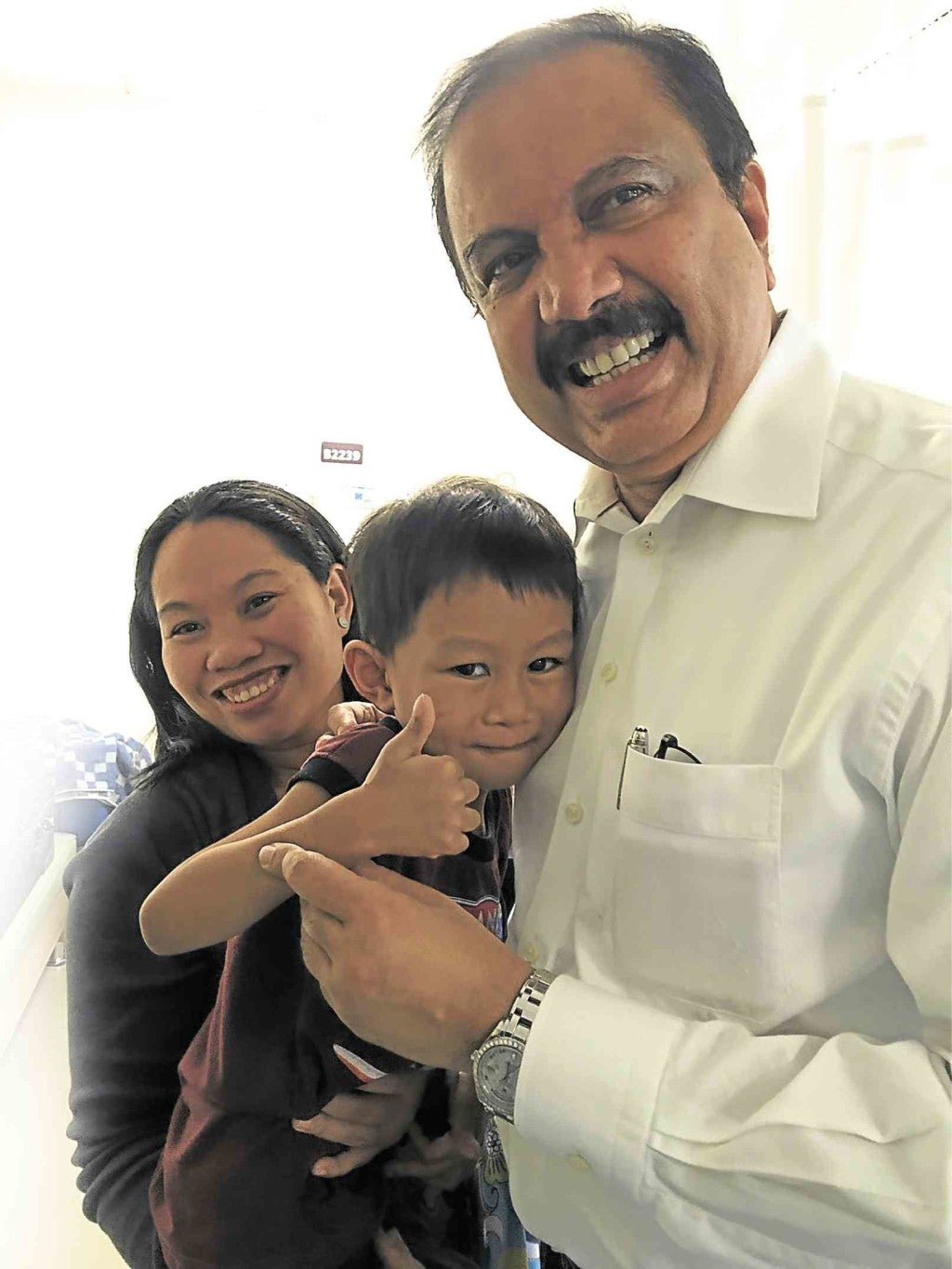 Like other five-year-old boys, Joneil Dasi-an can be quite a handful, running all over the place with glee and stubbornly leaving his toys about.

But just a few months ago, Dasi-an could barely walk. He had difficulty breathing, had little energy and his fingertips and lips had a bluish tinge, outward indications of the lack of oxygen circulating in his body because of his defective heart.

That Dasi-an with his wide smile and bright eyes can now annoy his mother and play with joy in his heart and strength in his muscles is due mainly to the generosity of Dr. Azad Moopen, a physician-turned-entrepreneur from India who has made it his mission to give 50 children from the Philippines free heart surgery so they can live life to the full.

Through DM Foundation’s “Save the Little Hearts” program that helps indigent children with congenital heart disease, Dasi-an, who suffered from Tetralogy of Fallot, was operated on by a team of Indian specialists led by Dr. Sajan Koshy, a senior consultant for pediatric cardiac surgery at the Center of Excellence in Cardiac Sciences in Aster Medcity, Kochi.

Had Dasi-an been left untreated, he would have likely suffered further delays in his growth and development. He could have even died.

“Joneil presented with bluish coloration of fingertips and lips and problems in breathing, all resulting from the congenital heart defect known as Tetralogy of Fallot. This should ideally have been corrected in the first year after birth. The procedure was not free from risk due to his age. But we decided to take up the challenge. The child was evaluated by our expert team of specialists and a five-hour long surgery was successfully undertaken,” said Koshy.

Dasi-an was the first child flown from the Philippines to the world-class Aster Medcity in India for the much needed heart surgery, and he is certainly not going to be the last.

Moopen, one of the leading business icons in Dubai and a healthcare trailblazer in the Middle East and India, told the Inquirer in a recent visit to Aster Medcity the Philippines and the Filipino people have a special place in his heart. He believed he owed part of his success to them.

Of the total employees of Aster DM Healthcare, which now has its footprints across boundaries, having operations in the UAE, Saudi Arabia, Oman, Qatar, Bahrain, Jordan, and several locations across India, about 20 percent are Filipinos. They comprise the biggest number of foreign workers in Moopen’s complex with all other nationalities accounting for 20 percent and Indian nationals taking up 60 percent.

Founded in 1987, the Dubai-headquartered healthcare conglomerate operates a network of more than 290 establishments covering an array of healthcare facilities—from hospitals, medical centers, pharmacies, diagnostics and specialty centers, healthcare consultancy service, academics and research to a medical college and an advanced medical city.

One of the latest additions to the conglomerate is the facility in the Philippines, which is also the group’s first in Southeast Asia.

In coordination with DM Foundation, the local unit has helped 27 Filipino children from disadvantaged families who cannot afford to have their children with congenital heart diseases treated. They form part of the total of 750 children who have benefited from the “Save the Little Hearts” program across various geographies, including Afghanistan and Africa.

Moopen said it was while contemplating on what he could do to give back to the Filipinos that he decided on bankrolling the free care of 50 children.

Dasi-an is the 27th child to benefit from Moopen’s generosity, with the others before him operated on in the Philippines. About five more children are set to receive similar life-saving operations soon.

Just two days after his open heart surgery, Dasi-an was already up and about and proudly showed his healing scar to the doctors and the Indian journalists who were there when the child was presented to the public.

Moopen said he wanted to concentrate on children because they would feel the impact of the surgery far longer than adults. He also wanted to be instrumental in giving them a life they deserved and a reward for their bravery facing their illnesses.

The surgery of Dasi-an and other children like him is part of his commitment to dedicate part of his personal income for charity, not just for Indians but all deserving populations that need access to good quality healthcare.

Dasi-an was brought to DM Foundation through Rotary Club of Manila’s Lance Masters, who is also on the board of the Philippine-India Business Council. In one of the council’s meetings, he met AsterPhilippines general manager Joyce Alumno, who talked about the “Save the Little Hearts” program.

It so happened that Masters was also approached by his househelp, whose nephew badly needed surgery to correct the defect in his heart. Through a series of fortunate events involving Alumno and Masters, the child and his mother left the country for the first time and went to India, where his fortunes took a turn for the better.

Alumno shared the AsterPhilippines and DM Foundation receive numerous requests for assistance. It is estimated that for every 1,000 live births, five will have congenital heart defects and many will have no monetary means to cover the expense.

And this is where DM Foundation steps in.

Priority is given to those who really need the help—those certified to be in need of assistance by the Department of Social Work and Development. This is to make sure precious financial resources will indeed go to those who need it the most.

“Reports show that every nine minutes, a child below 15 years old dies of heart disease. We are grateful that through the selfless heart of Dr. Moopen and the expertise of our doctors in India, children like Joneil are given a chance to enjoy a quality of life like any normal child,” Alumno said.

According to Moopen, he wants to concentrate his resources in the medical field not just because it is his core competence but also because he feels it is very important that the facilities he is creating will be of “benefit to mankind.”

“One of the great pains in development healthcare is that we do have many facilities, but accessibility and affordability of those for the social sector is negligible. That is great pain for anybody with a conscience. We wanted to at least to some extent address this, and that is why we opened this foundation,” said Moopen.

Moopen personally visited Dasi-an in the ward room after his surgery and hugged the boy who presented him with a drawing, which showed a heart turning from blue to red.

“We are very happy that we can bring this boy from the Philippines here and provide the treatment. The doctors in the pediatric surgery have done an excellent work. And we promise to provide pediatric surgery to more children like him,” said Moopen.

Moopen shared he was inspired to dedicate a part of his money to his foundation similar to what business magnate and investor Warren Buffett did. The latter publicly declared his intention to dedicate the bulk of his wealth to charity.

“I have done only a small part but I thought it was a start,” said Moopen, who has already divided his fortune among five—his wife, children and the charity arm.

“I feel unhappy, sorry when there is someone knocking at the door, requiring treatment but can’t afford it. You can’t help but feel a pinch,” said Moopen.

The philanthropist is seeing the operations in the Philippines growing over the next five years, with clinics and perhaps even a hospital. Part of the income, he said, would definitely go to charity work.

Moopen is giving himself five more years to be active in his healthcare empire but he is already thinking about his legacy and what he can do in return for his blessings, having received everything he has ever wished for.

“Bill Gates, Warren Buffett, they have inspired people like me. I think that maybe if I do this, maybe somebody else will be inspired to do the same or even more,” said Moopen.