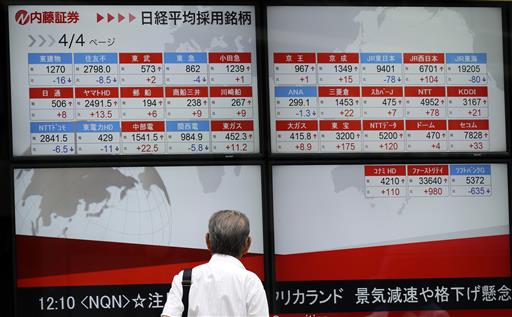 A man looks at an electronic stock board showing Japan’s Nikkei 225 index at a securities firm in Tokyo, Tuesday, July 19, 2016. Asian stocks were mostly lower Tuesday as investors stuck to a holding pattern as they awaited more corporate earnings and a European Central Bank policy meeting later in the week. AP

POKEMON POP: Nintendo Co. shares surged another 14 percent thanks to the wildly popular “Pokemon Go” game. While the Japanese game maker isn’t a component of the Nikkei index, its rally helped lift broader investor sentiment. The Kyoto-based company accounted for about one in four shares that changed hands on the Tokyo exchange’s main board. Nintendo’s market capitalization has now doubled since the launch of the augmented reality game on July 6.

GLOBAL OUTLOOK: Investors are anticipating a slew of events this week that they’ll assess to get a better read on the state of the world economy and what it might mean for stock markets. British data set for release starting later Tuesday will provide an update on how the country’s economy is doing after the Brexit vote. A slew of U.S. corporate earnings are also expected throughout the week, while the ECB’s policy rate decision is Thursday, with markets expected to be volatile ahead of the announcement. Australia’s central bank, meanwhile, released minutes of its July meeting showing that officials downplayed the risk of Britain’s Brexit vote to the world economy while noting that inflation remained weak, which analysts believe could open the way for policy easing.

ANALYST VIEWPOINT: “The market has put two and two together after release of the more detailed (Reserve Bank of Australia) minutes and concluded that the probability of an August rate cut has increased,” Ric Spooner of CMC Markets in Sydney said in a report. However, he added that “the stock market is struggling to get enthusiastic. This reflects a degree of caution as traders assess the odds of further gains.”

SOFTBANK SOFTNESS: Shares in Japanese technology company Softbank Group Corp. slumped 10 percent one day after it announced that it is buying Britain’s ARM Holdings for 24.3 billion pounds ($32 billion) in a bid to expand into the “Internet of Things” — or connected home devices. Investors were apparently unhappy that SoftBank is paying a 43 percent premium to ARM’s closing share price last week.

CURRENCIES: The dollar edged lower to 106.08 yen from 106.22 in late trading Monday but was still hovering near its highest level in nearly a month. A weaker yen helps shares of Japan’s big export manufacturers. The euro dipped to $1.1069 from $1.1070.

ENERGY: Benchmark U.S. oil futures slipped. Crude fell 17 cents to $45.07 a barrel in electronic trading on the New York Mercantile Exchange. The contract lost 71 cents to settle at $45.24 per barrel on Monday. Brent crude, the standard for oil sold internationally, fell 12 cents to $46.84 a barrel in London. TVJ