Staunch antimining advocate Regina “Gina” Lopez has accepted the offer of President-elect Rodrigo Duterte  to head the Department of Environment and Natural Resources (DENR), which oversees the country’s mining industry.

“After much introspection, I decided to accept it. Let’s see what happens,” Lopez told reporters after talking to Duterte over the phone at the sidelines of the 4th Excellence in Educational Transformation Awards held at the ABS-CBN compound in Quezon City.

A day after she was offered the post, Lopez told Duterte she was deeply honored since it’s a controversial decision—that he has decided to trust her.

“I give you my firm commitment that I will do everything that I can and it’s not only to protect the environment [but also] to eradicate poverty,” she told the incoming President.

News of Duterte’s offer to Lopez sent share prices of mining and oil stocks plunging by 4.09 percent at the end of trading on Tuesday. While the key Philippine Stock Exchange index  gained 1.33 percent  and reached a new high for 2016, the mining and oil index slumped.

Analysts said investors dumped mining stocks on Tuesday on expectations that the regulatory environment for mining might become more challenging under the Duterte administration.

Lopez, who described herself as “not the usual choice” for environment secretary because of her antimining stance, said she was open to meeting promining advocates so she could make “suggestions” on how to address concerns in the industry.

Lopez also warned corrupt officials at the DENR that their days are numbered.

“We’ll clean the ranks of the DENR. Those accepting bribes, your days are over. Stop it. No corruption is acceptable,” she said.

She blamed corruption within the department for the deterioration of the environment.

Lopez, 61, chair of ABS-CBN Lingkod Kapamilya Foundation, studied at Assumption College and Newton College of the Sacred Heart in Boston. She has a master’s degree in development management from the Asian Institute of Management and a doctorate degree in humanities from Ateneo de Naga University.

Environmental  champions and activists hailed Duterte’s appointment of  Lopez as the next environment secretary.

“President Duterte picked the right person to fight for what is right as she has proven with La Mesa Dam, Pasig River and her antimining stance  that is consistent with what the President wants to happen,” Hagedorn said.

Environmentalist Tony Oposa Jr. sent a message from Norway: “President-elect Duterte made the right choice. We will support her all the way!”

Sonia Mendoza, president of Mother Earth Foundation, welcomed the appointment of Lopez. “We thank the President for his choice as we promise to support His Excellency’s environmental programs,” she said.

“That’s a breakthrough in executive policy because in the past all executive departments have favored large-scale mining and had little support for small-scale mining,”  Ban Toxics executive director Richard Gutierrez said.

EcoWaste Coalition president Noli Abinales said: “We know that Gina is a fighter in protecting the environment from destructive industries like mining.”

Clemente Bautista, national coordinator of the militant Kalikasan People’s Network for the Environment, said Lopez had a “proven track record” against mining.

Greenpeace Philippines country director Amalie Obusan said she hoped Lopez would be consistent and reject all environmentally destructive projects, including those pushed by her family.

As head of the DENR, Lopez will also oversee the operations of  the Mines and Geosciences Bureau, which regulates the country’s mining industry.

“Mining counters fell on market concerns that Duterte’s potential appointee to the DENR post would pursue policies that are pro-environment and that may cap the extraction of natural resources in the country by mining companies,”  said Michaelangelo Oyson, president of BPI Securities. 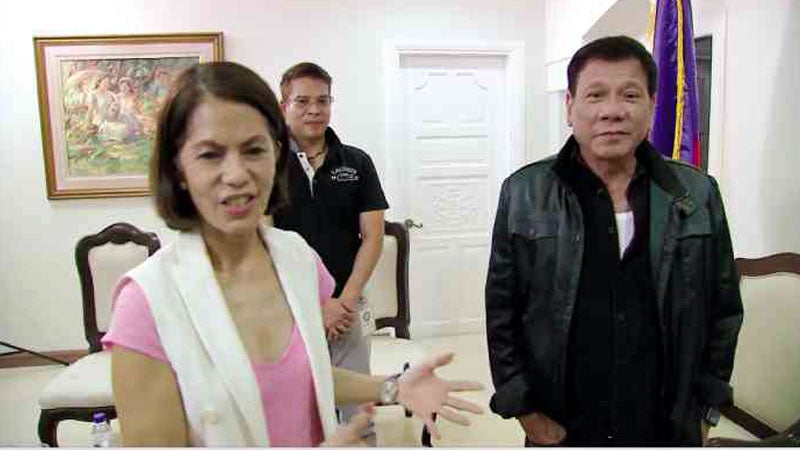 “Given the high dependence of the mining industry on future production, the market has apparently reacted negatively to the invitation of the Duterte administration to Ms Gina Lopez as DENR secretary due to possible increased regulations and restrictions that could affect future earnings should she accept the position,” said Marvin Fausto, a fund expert at COL Financial and president of IFE Management Advisers Inc.

The only mining stock that was unscathed on Tuesday was Semirara Mining, which gained by a modest 0.23 percent.

Market participants were reminded on Tuesday of a heated exchange between First Pacific’s Pangilinan and Lopez during a mining forum in 2012.

Lopez had supported Duterte’s presidential run because the Davao City mayor had banned mining in his city.

At a business forum in Davao City on Tuesday, Duterte again warned the country’s mining companies to do it right or get out of mining, saying he would not allow the destruction of the environment.

“There will be a comprehensive review of the mining claims and concessions given. And you must endeavor, if you are into it, be sure that you have enough resources,” Duterte told businessmen.

He advised mining companies to go to Australia and Canada,  learn from their best practices in mining precious metals and do it here.

The Chamber of Mines of the Philippines (COMP), however, assured that large-scale miners would continue to advocate responsible mining to benefit not just host communities but the entire country.

COMP executive vice president Nelia Halcion said that its members were prepared to fulfill the mining industry’s crucial role of helping sustain a strong economic growth and spreading this to the countryside. With reports from  Ben de Vera, Riza Olchondra,  Leila Salaverria and Ronnel Domingo/TVJ