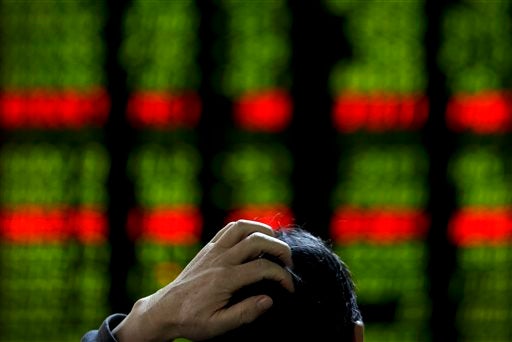 A man scratches his head as he checks the stock prices on an electronic board at a brokerage house in Beijing, Tuesday, Jan. 5, 2016. Last year’s Chinese stock boom and disastrous bust has left a legacy of public distrust of financial markets along with a bill the ruling party has yet to disclose for its rescue. AP FILE

SHANGHAI, China — Small-time investor Tracy Li lost more than $3,000 of her hard-earned salary from working at a bank after China’s stock market crashed last summer, wiping out trillions of dollars in valuations in just days.

A year later, and she has been burned twice, betting government intervention to prop up the market after the rout would guarantee good returns.

“Everybody was saying that the market was starting to rebound,” she told AFP. “I bought a stock a friend recommended to me, but now I’ve lost 35 percent of my investment this year.”

Her story is not much different from that of millions of other private investors who saw their savings go up in smoke during a year of countless government attempts to prop up the beleaguered market.

Despite Beijing’s best efforts, stock prices remain in the doldrums, with a reform agenda put on the back burner.

Sunday marks the first anniversary of the day it all began to crumble, when the Shanghai stock market — having soared in the previous 12 months — started a 40 percent slide that it is struggling to recover from.

The benchmark Shanghai Composite Index rose more than 150 percent in the year to June 12, 2015, peaking at 5,166.35 as the government loosened limits on trading with borrowed money and encouraged buying with glowing commentary in state-controlled media.

The bubble had been fuelled by lax government controls and rash investors looking for a quick profit, in what analysts say is an object lesson in the risks of trying to use policy to defy market forces.

When the collapse came, it destroyed fortunes, sparked a costly state bail-out, and shattered investor sentiment.

But hard lessons were still to come.

As the market plunged, China tasked a “national team” to prop up prices by directly buying at least $236 billion worth of stocks, according to one estimate, which state-linked entities are still holding after hints they might unload them sparked renewed market panic.

Initially, the measures seemed to work, with the stock market rallying more than 24 percent from the low in August to mid-December.

But another crash came in January — with global repercussions — after the botched implementation of a so-called “circuit breaker”, which was intended to halt trading in case of volatility but instead created a disastrous feedback loop that drove heavy sell-offs.

Many of those who returned to stocks after the initial crash got burned.

Software company boss Huo Jiayu invested 20,000 yuan ($3,000) in January, but he was caught by the renewed fall this year, which was driven by worries over China’s flailing economy and weakening currency.

“I was trapped. I didn’t even have the chance to cut my losses and before I knew it, I was losing too much money to get out,” Huo told AFP.

China removed the head of the market regulator responsible for the fiasco but the debacle raised questions about the government’s managerial abilities and its commitment to promised market reforms.

“The government should avoid stimulating the market through policies. It should strive to build an open, free and fair market under the rule of law,” said Hong Hao, Hong Kong-based chief strategist at securities firm BOCOM International.

Investors learned a “profound” lesson, too, he said, becoming more wary of the margin trading — the use of borrowed funds to buy stock — that played a key role in the run up.

Now, the stock market has recovered slightly from January and February’s plunge but it is still down almost 20 percent this year, making it the world’s worst performing market among indexes tracked by the Wall Street Journal.

On Wednesday, the last trading day before a holiday, the Shanghai Composite Index closed at almost the exact same level as its low in August — the depths of the summer crash — and analysts warned there could still be further losses.

None of that, however, has stopped Chinese officials from pushing for domestic shares to be included in global benchmark indexes compiled by MSCI — used as a guide by investors to allocate their portfolios. A decision is due on Tuesday.

Pressing issues include encouraging more institutional investors instead of individuals bent on short-term gains, and a long-awaited revamping of the initial public offering system which gives the market a bigger role.

The year of hard lessons, however, has made regulators gun shy.

But one thing is for sure, he said. The days of sky-high pay offs are gone.

His advice for investors? They “should lower their expectations and forget about unrealistic, high returns.”