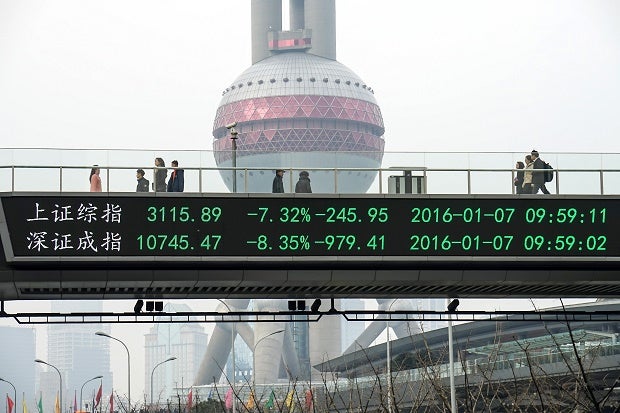 People walk across a pedestrian bridge with an electronic display showing figures for the Shanghai, top, and Shenzhen, bottom, stock exchanges in the Lujiazui Financial Zone in Shanghai, China Thursday Jan. 7, 2016. Chinese stock trading was suspended Thursday after “circuit breakers” kicked in following a steep plunge of more than 7 percent, in the latest spasm of investor panic on the country’s volatile markets. AP

BEIJING — The latest trigger was currency jitters, but Thursday’s plunge in Chinese stocks was just one in a series of aftershocks from last year’s boom and bust that could shake markets for months to come.

On Thursday, trading halted for the day after a stock index fell 7 percent a half-hour into the trading day. It was this week’s second daylong suspension after a plunge in prices Monday tripped the same “circuit breakers” that were introduced Jan. 1.

Regulators suspended use of the “circuit breaker” effective Friday after economists warned it might be adding to volatility. They said trading was halted to often and the mechanism accelerated declines by encouraging investors to sell quickly before they were locked out. According to IHS, the mechanism would have been tripped 20 times if it had been in place in the final quarter of 2015.

The benchmark Shanghai Composite Index more than doubled between late 2014 and June, then dived 30 percent. Supported by a multibillion-dollar government intervention, the market rose almost 25 percent in the final months of 2015, only to collapse in the new year. That left the main index down 15 percent from its December peak.

Wild price swings could continue through the first half of this year, according to financial analysts. Even after the latest declines, the Shanghai index is up 36 percent from October 2014.

The turmoil in China triggered a sell-off in Asian and Western stocks. Beijing keeps its markets sealed off from global capital flows, but due to the vast size of China’s economy, foreign investors watch them closely and react to volatility.

“The market still is trying to find a bottom, and that takes time,” said Chen Yong, a strategist at Lianxun Securities. “The key is to be able to resume normal daily trading, and during that time volatility is inevitable.”

The upheaval disrupted the ruling Communist Party’s plans to use the stock markets as a tool to make China’s state-dominated economy more competitive and productive.

Economic growth fell to a six-year low of 6.9 percent in the July-September quarter and is forecast by the International Monetary Fund to decline further to 6.3 percent this year. Monday’s stock price plunged was triggered by surveys that showed manufacturing in December was weaker than expected.

The latest bout of selling was fueled by concern Beijing is letting China’s yuan weaken too fast against the dollar.

The yuan, also known as the renminbi, has drifted down by 6 percent against the US currency since the central bank adopted a mechanism in August it said would make the state-set exchange rate more market-oriented.

The yuan’s link to the dollar meant it soared as the US currency climbed over the past year, making it overvalued by 10 to 15 percent against those of other developing countries. But the prospect Beijing would close such a large gap fueled fears it might lead to an outflow of capital, weakening China’s economy and reducing the supply of money to support share prices.

“The government hopes to see the yuan depreciate to stimulate exports and the economy, but the speed of depreciation went too fast,” said analyst Zhang Gang of Central China Securities.

The White House said the US was closely monitoring China’s currency. White House spokesman Josh Earnest said the US approach to the uncertainty was to continue pressing China to speed up the pace of economic reforms he said would benefit China long-term and help the global economy.

Investors also were skittish about the impending end Thursday of a six-month ban on share sales by any stockholder who owns more than 5 percent of a company, according to Zhang.

Regulators tried to head off such concern by announcing earlier in the week major shareholders could sell only in private transactions to avoid flooding the market. After Thursday’s market plunge, the securities agency tightened that restriction by saying they can unload only the equivalent of 1 percent of a company’s shares over the next three months.

Chinese leaders encouraged novice investors to pile into stocks beginning in late 2014. They wanted to raise money for state companies to pay down heavy debt loads and become profit-oriented and competitive. Communist planners also hoped investing would help families save for retirement, easing the pressure on Beijing to pay for pensions and health care.

Those plans went wrong when markets soared faster than Beijing wanted. By May, state media that cheered on higher prices started to mix in appeals for investors to act prudently.

The government has yet to say what its intervention cost, but Goldman Sachs has estimated state entities spent 860 billion-900 billion yuan ($135 billion-$140 billion) to buy shares in June and July.