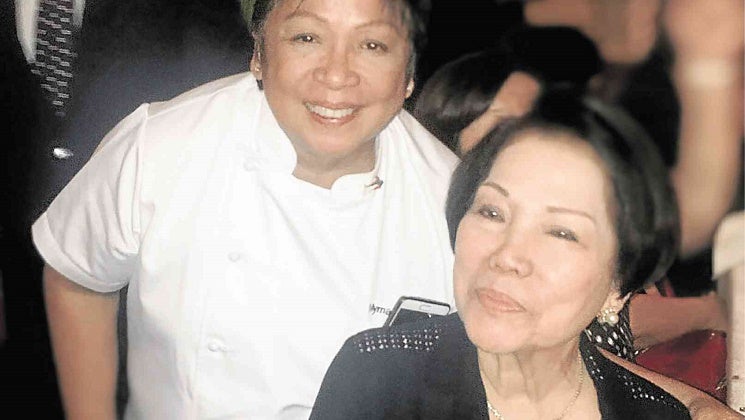 The Peninsula Manila is turning 40 years old this year.

It’s great to see that after the Mandarin closed in 2014 and the Intercon bid adieu in 2015, the Pen—one of the last from that batch of “institution hotels” in Makati—remains not only open, but radiant as well.

The Sunburst—the iconic sculpture by National Artist Napoleon Abueva on the Pen ceiling—truly keeps the Pen shining 24/7, year after year!

The hotel is making a great effort to celebrate with its guests.

Escolta buffet—first known as La Bodega (carbon date yourself and say you’ve eaten here) then re-opened as Nielsen’s before becoming Escolta—is currently offering a promo, pricing the buffet at only P1,976 net this month of June.

To join in the festivities of celebrating Philippine Independence and Peninsula’s 40th, Chef Myrna Segismundo has created a special Filipino menu that will be available at the Upper Lobby from June 9 to 19.

Chef Myrna is a Peninsula “suki.”

Just last year, she did a “four hands” collaboration dinner with Spain’s Michelin-starred celebrity chef Mario Sandoval of Restaurant Coque, where he showcased his mastery of roasts while she displayed her expertise in presenting traditional Philippine cuisine for a fine dining audience.

For the Peninsula’s 40th, Chef Myrna is cooking up a fiesta of 12 modern Filipino favorites. Among these favorites are: okoy, batchoy, taba ng talangka (crab fat) and bistek Tagalog.

But, since it is the Peninsula, what’s served is not your ordinary Filipino comfort food.

Okoy is served with an ensalada of palm hearts, jicama and pomelo.

An excellent execution of batchoy comes with a side of siopao-inspired pork buns using the most delicious Pen-worthy bread.

Crab fat shines even if it is the mere accent to a generous slab of sea bass.

Chef Myrna also serves her signature desserts such as the Queso de Bola cheesecake that many a Segismundo fan will be familiar with.

So if your business meeting falls anytime between the 9th to 19th, remember that there’s a special menu available at the Upper Lobby.

As an added treat, you will also get to experience the art of designer Kenneth Cobonpue.

You might get to sit on one of the Yoda chairs made famous at the Apec summit (and feel as powerful as Barack Obama) or on a Chiquita stool made of what looks like cork but actually rattan poles on a polyurethane cushion.

You have to try sitting on this stool—the “corks” contour to your butt! It’s like experiencing Manolo Blahnik shoes for the first time—you’ll be amazed at how good they feel!

I asked how much one costs—it’s approximately P35,000 per stool.

As with marriages, it is now rare for a business to last 40 years.

The Pen’s success must be attributed to the consistent quality and constant upgrade of the amenities as well as the warmth of the staff, some of whom have been with the Peninsula for almost 40 years.

Like many, I am a personal witness to the tender loving care from the Pen.

Our family has celebrated every Noche Buena here since I was born, with a photo by its famous giant Christmas tree.

Another family that always spends Noche Buena here is the family of Consul Fortune Ledesma with son/host RJ Ledesma. It came to a point where we would bring Christmas gifts because we would always see them on Christmas eve.

Congratulations to the Peninsula on its Ruby anniversary!