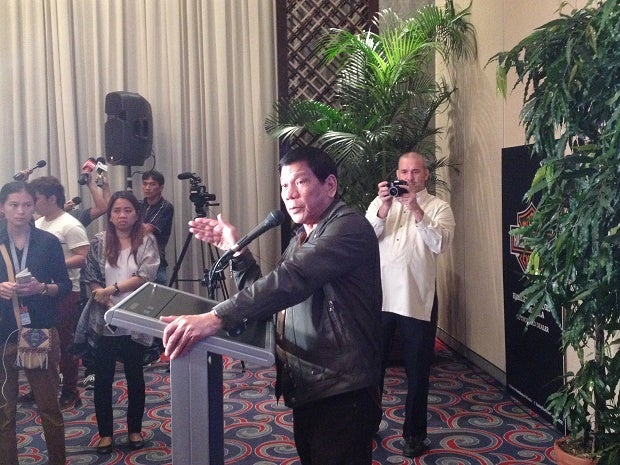 The key Philippine Stock Exchange index fell on Tuesday for the fifth consecutive day, a stretch that began after Duterte made a speech before top business leaders in which he joked about his penis and vowed to pardon himself for mass murder.

Ramon del Rosario, head of the prestigious Makati Business Club that hosted Duterte last week, wrote a column Tuesday in the Philippine Daily Inquirer criticizing the candidate’s “distinct lack of respect for the rule of law.”

READ: A vote for our future

With the key stock exchange index down 1.62 percent since Duterte’s speech, analysts said investors were nervously waiting to learn more about his economic policies.

“They are not sure about his economic platform because Duterte has always emphasised his campaign on corruption and not what he would do about the economy,” research chief April Lee Tan of Manila-based securities firm COL Financial told AFP.

“That uncertainty is causing a lot of investors to stay on the sidelines and wait and see how a Duterte presidency would pan out.”

Duterte, 71, enjoys a double-digit lead in the polls over four opponents ahead of Monday’s national elections.

This is despite shocking the political establishment with his profanity-laced speeches, which have included cursing the pope and a joke about raping an Australian missionary who was murdered in a 1989 prison riot.

Analysts say his promises of quick fixes to crime and other deep-rooted problems resonate with voters who feel the six-percent economic growth delivered under President Benigno Aquino III has failed to improve their lives.

Duterte has been the mayor of the major southern city of Davao for more than two decades. He claims to have fixed crime and thus enabled businesses to succeed there by a ruthless crackdown on criminals.

His critics say Davao is not the utopian society portrayed by Duterte, and point to vigilante death squads that have killed more than 1,000 people there as an example of what the rest of the country can expect if he becomes president.

Aquino, who is limited by the constitution to a single six-year term, warned last week in a thinly-veiled reference to Duterte that the country risked falling into dictatorship.

Duterte campaign manager Leoncio Evasco on Tuesday accused the Aquino government of orchestrating a “vilification campaign” against the front-runner.

Duterte: I’d rather lose polls than lose my identity

Duterte: Yes, I’m a dictator, so what?