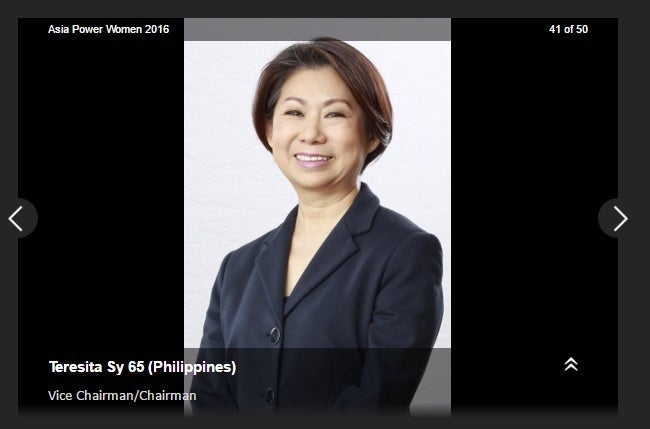 In a press statement on Thursday, Forbes Magazine said it recognized powerful businesswomen in Asia who were “shaking things up across diverse industries” in its 5th annual “Asia’s Power Businesswomen” list.

The list, which is available on www.forbes.com/asia-women as well as in the latest issue of Forbes Asia, acknowledges the inroads women are making in the business world, the magazine said. Women from 14 countries were represented in this latest list.

“To qualify, candidates have to be active in the upper echelons of business in Asia, wield significant power and have access to robust financial resources,” the magazine said.

Sy-Coson, 65, led the growth of Sy family-led Banco de Oro Unibank from a niche player to the largest lender in the country. Among second generation Sys, she is also believed to be the most likely to succeed patriarch Henry Sy Sr. as the captain of the ship. She is the country’s constant representative to this list.

Gokongwei-Pe, 54, has joined the list for the first time. She leads multi-format retailer RRHI, one of the country’s second largest retailers which benefit from growing consumer affluence in the country.

China and Hong Kong dominated the latest list with 14 women, followed by India with eight, Thailand with five and Japan with four. Singapore, Australia, Indonesia and Vietnam each have three. South Korea and the Philippines each have two while Macau, Taiwan and New Zealand have one each.

The magazine said that despite China’s slowdown, a core group of this year’s listees was creating wealth in the country’s manufacturing sector. They include Ma Xiuhui, cofounder and CEO of Opple Lighting, a company that started out making traditional bulbs and whose LED lighting now illuminates homes around the world; and, Mou Jinxiang, cofounder and chair of Lianhe Chemical Technology, which sells specialty chemicals to giants such as Dow Chemical and BASF. With a 30.5 percent stake in the company, Mou is also a member of the Forbes China Rich list with an estimated net worth of $960 million.

From India, Nita Ambani, director of Reliance Industries and chair of Reliance Foundation, debuted on this year’s list. She is also the wife of billionaire Mukesh Ambani. “Her rising profile in the Reliance empire is unusual and earns her a spot in this year’s ranking,” the magazine said.
Chanda Kochhar, a five-time listee, helms ICICI Bank, the country’s largest private-sector lender.