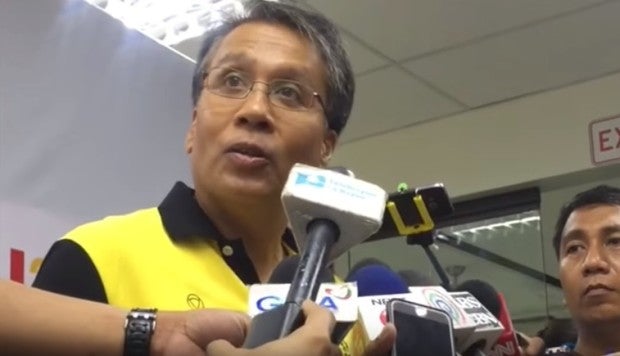 In front of some of the country’s wealthiest people, Liberal Party (LP) presidential standard-bearer Mar Roxas on Wednesday made a pitch for poor Filipinos.

“Our people deserve so much more than what they’re getting,” Roxas told his audience at a forum organized by Makati Business Club (MBC) and Management Association of the Philippines (MAP) at the Fairmont Hotel in Makati City.

“That’s what this journey is all about. It’s giving them what is their due, a due that many of us here already enjoy, perhaps even taken for granted. But for them it’s still quite unreachable,” he said.

Receiving a rock star welcome, Roxas was visibly in his element, shaking hands with the who’s who of the Philippine business community.

MBC and MAP members as well as other guests who attended the event held in the hotel’s ballroom applauded and cheered Roxas as he arrived around noon.

“That’s my President,” an elderly woman said as she trained her smartphone on Roxas to take a picture of him.

The chosen candidate of President Aquino, Roxas is struggling in the presidential polls, the latest of which shows him trailing Vice President Jejomar Binay of the opposition, Davao City Mayor Rodrigo Duterte and independent Sen. Grace Poe.

Roxas presses his campaign, however, saying the most important poll for him is the May 9 vote.

“This is like a reunion for me because I’ve worked with many of you when I was still the [trade and industry] secretary,” Roxas said in his speech.

Roxas lamented that fishermen, small farmers and other ordinary workers are not “compensated properly” for their hard work “because of the system that’s in place.”

“We, you, the businessmen, the educated, those who have made it, we owe them. We owe our people what we can. Not because it’s a handout, not because of pity, but simply as a recognition of what they do, the hard work that they do,” he said.

Roxas urged the business community to continue its good partnership with the government to ensure the equitable distribution of wealth among the population.

“Your success is the people’s success,” he said, adding that there remained hindrances to economic development that should be removed to “unleash their own potentials and receive the just wage, compensation, income that they so deserve.”

Despite the criticisms thrown at President Aquino, Roxas reminded the businessmen of the progress that the Philippines had seen since Mr. Aquino came to office in 2010.

“You guys, everybody here, look at your bank accounts. Look at the value of your land. Look at the economy. Look at the number of people who have moved out of the poverty line. Look at the infrastructure that has been built,” he said.

‘Best yet to come’

“We’ve come a long way. And I just want to say, the best is yet to come,” he said, drawing applause from the crowd.

Ramon del Rosario Jr., MBC president, said the forum was a venue for the presidential aspirants to present their platforms of government and policies before one of the country’s most influential business groups.

He said the organization had wanted to invite the presidential candidates in alphabetical order, but Binay and Duterte had yet to confirm their attendance.

Poe, the leader in the polls, appeared at the forum two weeks ago.

“This presidential dialogue aims to provide our candidates an opportunity to discuss in detail their platforms of government, especially on the economic and social fronts,” Del Rosario said.

Speaking with reporters after the event, Roxas said he was moved by the warm reception given to him by the MAP and MBC members.

“I’m touched with the good reception here because we don’t agree with each other at all times. I have made decisions and pushed for laws [that] were against the interests of some MBC members,” Roxas said.

“But I have explained to them that what I did was for [the] national interest and nothing personal against a certain company. What’s important is that the interest of the people would be prioritized because that’s the process of nation building,” he added.

Roxas laid out his economic agenda, starting his 30-minute speech by reminding his audience that voting for a presidential candidate is like investing in a business.

Some of those in the audience broke into cheers as he presented his plans to spur economic development, which included turning the crowded, problem-plagued airport complex in Parañaque City into a 440-hectare commercial complex.

Roxas, a Wharton-educated investment banker, said the Philippines was now in the “diaper to short pants”—a term used in venture capital—phase of development.

“And the question for us as a nation is, ‘How do we get from short pants to long pants and who’s the best person that can take us through the transition?’” he said.

“The problems of getting from diaper to short pants are very, very different from the problems that will get us to long pants. We want to get into the big boys’ game,” he added.

Roxas said that if elected, he would pursue economic growth  by strengthening the “three pillars” of the economy—manufacturing, tourism and agriculture.

He promised to invest more in human capital by improving the quality of public education, speeding up the Internet connection and providing this technology to schools across the country.

Valedictorians of all state-owned high schools would be  entitled to an annual scholarship grant of P100,000, he said.

“These are the best and brightest by definition of the principles and the school system in those places,” he said. “Their poverty would not be a limit to the kind and quality of education that they can get.”

Apart from the yearly educational grant, Roxas said students who belong to the top 10 percent of the graduating class would also get a P10,000 stipend.

Roxas, who belongs to the landed Araneta clan, also vowed to put in place protectionist policies for the agriculture sector.

He shunned the proposals for the Philippines to join the US-led Trans-Pacific Partnership (TPP), which, he said, would only lead to the death of the country’s agriculture industry.

“For TPP as its stands right now, I would not be in favor of it because it will kill our agriculture sector,” he said.