I WROTE about the phenomenal come-from-behind win of Makati Mayor Jejomar Binay as Vice President of the Philippines in my book “Fundamentals of Marketing in the Philippine Setting (2nd Edition, with Chiqui Escareal-Go, 2012). His message that he would replicate his successes in Makati nationwide resonated with the public and positioned him as a public servant with solid track record in public service.

A heartbeat away from the presidency, he became the instant man to beat in the 2016 presidential elections, thanks to his high brand awareness and conversion rate then.

If there is an exception to the first mover advantage, it is in politics. Thus, Binay became the subject of alleged corruption charges while performing his duties as Makati mayor.

He was also accused of political dynasty when his wife and his son succeeded him as mayor, and his other children winning as senator, congresswoman and councilor.

He was branded a traditional politician, ironically something he was fighting against in the Marcos regime.

His first presidential debate in Cagayan de Oro back in February was not impressive to most. His answer to the question about how he inherited his wealth from his parents left more questions, as he has always claimed his parents were poor.

During the second presidential debate, he avoided directly answering the question aimed at him by perennial rival and former Local Government Secretary Mar Roxas on the corruption charges, preferring to state that the court will decide eventually.

Of course, cases can only be filed after his term as vice president and assuming he will not win the presidency.

Because of the accusations, some of his positive share of mind turned into a negative brand association—with the words “corrupt” and “liar” consistently being attached to him by the social media. Left unaddressed, the noise created will affect, and has in fact already affected, his voters’ share of heart or believability score. Likewise, his lower likability will affect his brand preference score, which in turn will further affect his voters’ intent to vote score.

The 14.6 million votes Binay got previously as vice president may no longer be repeated in 2016: 1) if voters will believe corruption accusations against him; 2) if voters will demand accountability of the promises he made as vice president; 3) if voters will not believe or trust his promise of scrapping the income tax for those earning below P30,000; 4) if voters will find more viable candidates like Roxas, Davao City Mayor Rodrigo Duterte and senators Grace Poe and Miriam Santiago; 5) if voters start believing the Aquino administration did well and want continuity;  or 7) if voters who failed to vote for Roxas in the 2010 elections may decide to give the Liberal Party candidate a chance in 2016.

Yet Binay remains to be the choice of many Filipinos experiencing poverty. They sympathize with Binay, who, among the candidates, can say he truly knows what every Filipino needs to get out of poverty. If he capitalizes on being the choice of the “masang Pilipino,” he might get a huge percentage of votes from that segment of voters.

Note, however, that while this analysis is based on logic, voters may not be as logical.

A review of the 2010 presidential elections revealed President Joseph Ejercito Estrada almost got reelected if not for the entry of then Senator Aquino, who won the presidency based partly on strong positive emotional connection to the demise of his mother, the well-loved President Corazon Aquino. But Estrada still got 9.5 million votes, despite being found guilty of plunder and later pardoned by his successor, President Gloria Macapagal Arroyo. Estrada then returned to public service by getting himself elected as mayor in Manila, a vote-rich area. 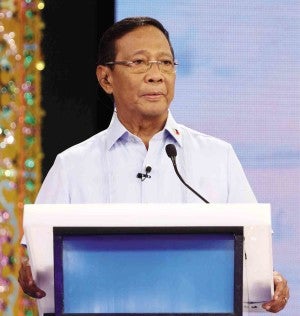 The rise and fall and rise of Estrada is an indicator that elections in the Philippines have not been fought by issues alone but by personalities as well.

Many candidates have pluses and minuses. There seems to be no perfect candidate. Even my family members are split among three candidates. Here are some of the top positive words associated with each candidate:

Poe: Fresh Change, No. 1 Senator (by virtue of being the daughter of actor Fernando Poe Jr.) 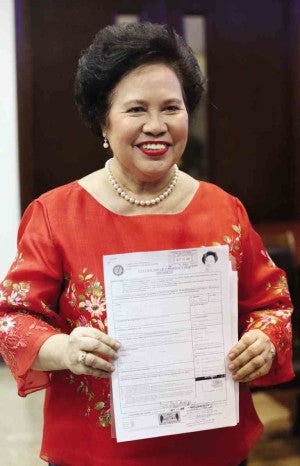 Here are some of the top negative words associated with each candidate. The candidate will carry with him or her this stigma at least in the first few months in office.

Poe: Lack of Experience, Once a US Citizen (with husband and children still American citizens)

Roxas: Issues related to his performance as a Cabinet secretary

Ultimately, two situations will have to be met: 1) positive traits should be strong enough to neutralize the negative; and 2) the existence of game-changing strategy to make voters change their perceptions about each candidate such that their negatives may no longer be relevant.

For instance, toward the election date, the following examples can add to the positive traits of the candidates, thereby winning the undecided voters and those without definite commitment to their votes.

Binay: Endorsement from the Iglesia ni Cristo to reverse a declining base 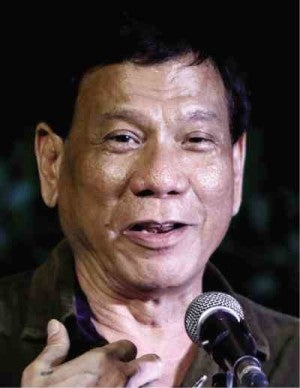 Duterte: Being a peacemaker and adding a God-fearing image reversing his “vigilante” persona; withdrawal of his endorsement of Santiago or when a heinous crime (God forbids) is committed that highlights the need for toughness against criminals

Roxas: Arrival of new MRT trains that can ease traffic congestion in Metro Manila; endorsement from credible celebrities and political heavyweights with loyal following, including a solid official campaign from workers of the BPO industry

Toward the election date, the following hypothetical examples can add to the negative perception of each of the candidates such that they may lose the emotional connection of the undecided voters and those without definite commitment to their votes.

Binay: What if the alleged lying or corruption issues are effectively communicated as to how it has deprived the poor?

Duterte: What if there is a human rights violation or a major crime in Davao?

Poe: What if there is a surge of nationalism (among voters, thus affecting both Poe, who pledged her loyalty to the US once, and Marcos, being a recipient of the ill-gotten wealth of his father)? 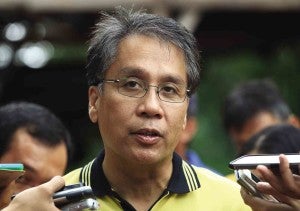 Roxas: What if news about his personal life, un-Daan Matuwid-like, comes out? What if a major traffic nightmare will happen just before the elections?

Santiago:  What if she is suddenly hospitalized?

Brand awareness is a function of media weight, which includes the indispensable social media factor. Note that ownership of smartphones has already reached 40 percent, according to Kantar Millward Brown Philippines.

The undecided voters will closely listen to what they read and hear in the “advertising copy” in mass media, social media and during debates. The message will not just have to be relevant, but memorable.

Roxas reclassified Makati into two: the rich Makati developed by the Ayalas and the poor Makati governed by the Binays. He also repositioned Duterte’s Davao as a source of drugs. 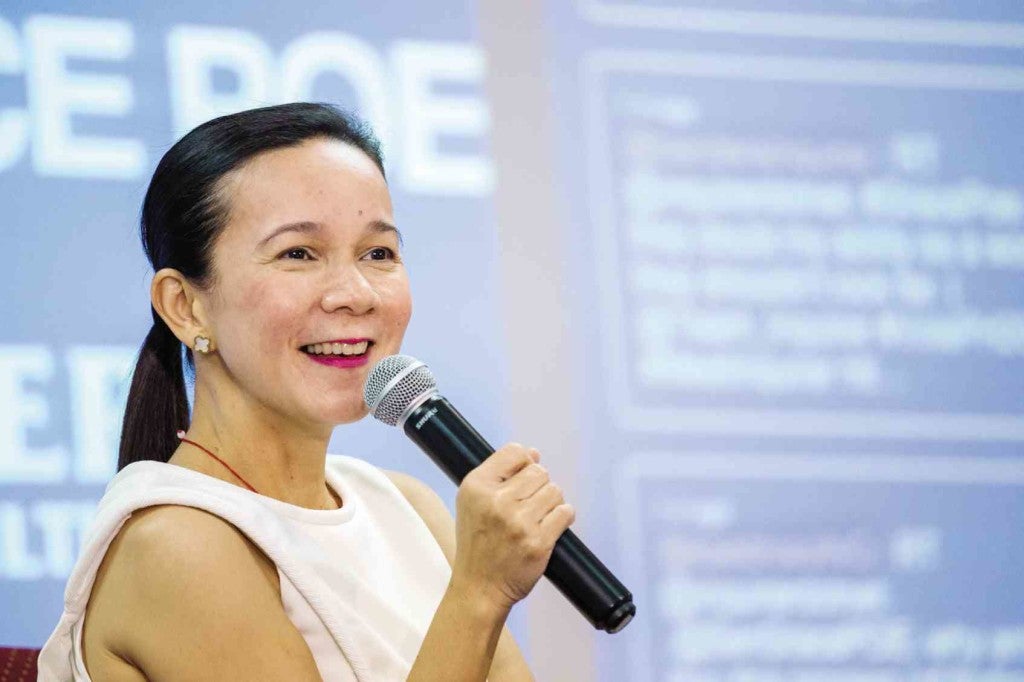 In his opening remark, he compared choosing the president to hiring a family driver for a child. He urged families not to hire one with corrupt cases (Binay) or who is short-tempered (Duterte) or inexperienced (Poe).

These are examples of repositioning competition. To narrow the gap between him and those with higher ratings than him, he had to logically create doubts and change the minds of the voters of his opponents.

To be fair, it is not just Roxas who has been repositioning opponents. Rivals cited his supposedly poor record in the departments of transportation and communications and later interior and local government, where his capacity as a leader was tested in the aftermath of Supertyphoon Yolanda and the Zamboanga siege. He straightened out the issues during the second presidential debate, where he introduced the word “disente” or having a respectable, moral fiber as a must-have characteristic of a president.

Here is another factor to consider: Millennials, about 35 million of them in the Philippines, are more open to choosing a leader who can capture their imagination.  You will be surprised at their ability to take risks.

Will voters then settle for an “inexperienced” but fresh leader, a “vigilante” straight-talking leader, a performing but allegedly “corrupt” leader, a decent leader accused of being pretentious by some, or a sick leader absent in the second debate? Who do you think the millennials will ultimately vote for?

(Josiah Go is chair of marketing, training and advocacy firm Mansmith and Fielders Inc. Follow his blog at www.josiahgo.com, where he interviews business and marketing leaders)