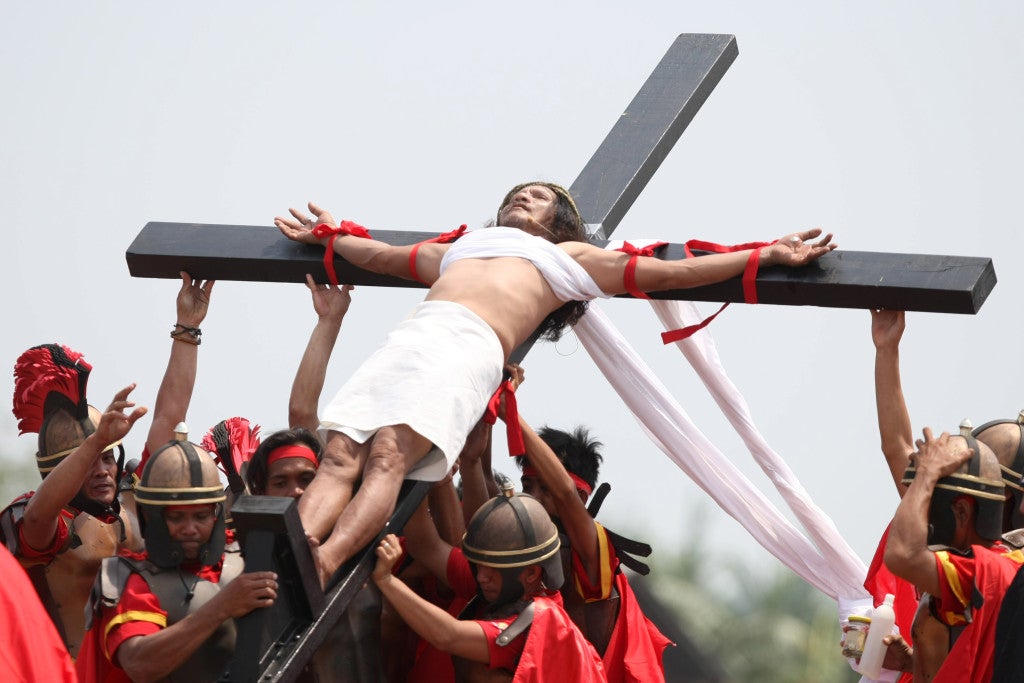 Ruben Enaje is hoisted by volunteers after he was nailed to a wooden cross during a reenactment during Good Friday rituals on Friday, March 25, 2016 at Cutud, Pampanga province, northern Philippines. Several Filipino devotees had themselves nailed to crosses Friday to remember Jesus Christ’s suffering and death, an annual rite frowned upon by church leaders in this predominantly Roman Catholic country. (AP Photo/Linus Escandor II)

SAN PEDRO, Philippines — The men being nailed to crosses in a Philippine village were seeking salvation, but for corporate sponsors and small-time vendors the Good Friday event was all about quick riches.

Local woman Rosemarie Musngi, 44, said she went to church first before setting up shop selling fried fish, snacks and souvenir shirts beneath a branded tent she had rented from a major telco.

“We prayed to God to let us earn a little money… we prayed for people to buy all of our merchandise,” she told AFP.

Cultural events of a religious bent are no barriers to making a buck in Asia’s Catholic heartland, home to some of the world’s most colourful displays of worship and also a feverish brand of capitalism.

The village of San Pedro, 90 minutes’ drive from Manila, is one of at least three that hold day-long passion plays every Good Friday depicting the sufferings of Jesus Christ.

The events are capped by men being nailed to crosses, and also feature bare-chested men whipping their backs bloody.

The devotees typically say they endure the suffering to be closer to God, for his favor, and for bad deeds to be forgiven.

Among the Good Friday events’ key sponsors are two of the country’s largest mobile phone outfits.

In exchange for free advertising and a place to hawk its merchandise, one of them, Smart Communications, live-streamed the event on the Internet and provided free Wi-Fi access on-site.

This enabled participants to instantly upload selfies taken with the crucified devotees for background.

“We are selling like hotcakes,” he said, citing a deal where a subscriber could buy a phone and some Internet data for the equivalent of just $19.

As the extreme events have become more popular, villages staging rival passion plays have tapped into the corporate sector to foot the rising cost of handling much larger crowds, from directional street signs to chairs to portable toilets.

Corporate sponsors provided goods and services — such as the Wifi and signage — worth about 300,000 pesos (about $6,500) to support the event, according to Ching Pangilinan, the San Fernando city tourism chief.

She said the events drew a combined 30,000 spectators each year, including about 1,500 Westerners.

“Who, after all, would really openly question or go against what is perceived or assumed to be ‘good’?” he told AFP.

The Philippine crucifixions are also now considered a niche market for tourists from nations with a shared Catholic heritage, such as those in Europe and Latin America, said Clang Garcia, operator of Manila-based Jeepney Tours.

“It has potential, though not everyone likes the idea of the blood and all. It’s not a mainstream destination,” Garcia said, noting the tourist traffic there pales in comparison to the country’s giant religious festivals.

These include the more conventional multi-day, Mardi Gras-like events that draw millions such as the one in the central city of Cebu in honour of a statue of the infant Jesus Christ.

Conspicuously absent at the San Pedro crucifixions were official representatives of the Catholic Church, the country’s dominant religious institution.

Archbishop Broderick Pabillo, an auxiliary bishop of Manila, said the Church discouraged the extreme forms of piety that fascinated many of the country’s more than 80 million Catholics, as well as the commercialism that followed it.

“To use that for commerce is not a manifestation of the faith,” Pabillo told AFP.

“There is really a danger that we will not promote the reason for the season of Holy Week. The focus should be on Jesus… on his sacrifice, not on us, not the one who mimics the crucifixion,” he added.

However Pangilinan, the city tourism officer, said the local authorities did not treat the crucifixions as a religious event — even though the participants did it to underline their faith.

“It’s a cultural activity, a part of the heritage of our people,” she said.

15 crucified on Good Friday in Pampanga

EASTER: Did Jesus really rise from the dead?