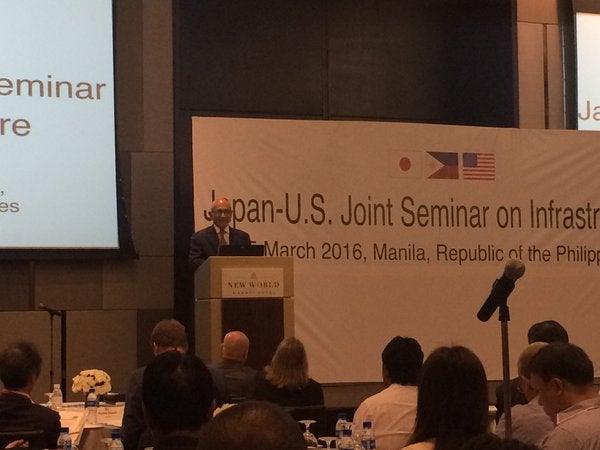 In a move seen to rival the influence of China-led Asian Infrastructure Investment Bank, the United States and Japan on Tuesday launched their first ever infrastructure seminar in Manila, encouraging further investments to the Philippines’ infrastructure projects.

“Today’s seminar is the first infrastructure seminar to be jointly hosted by the US Department of Commerce and Japan’s Ministry of Land Infrastructure, Transport and Tourism,” Yasuki Kaibori, Japan’s deputy minister for transportation, said in a speech opening the day-long seminar at the New World Hotel in Makati City.

Present at the seminar are representatives from American, Japanese and Philippine companies engaged in construction and major infrastructure businesses.

“We chose the Philippines because of its economic growth, its strong economic and diplomatic ties to Japan and the United States,” Kaibori said.

Arun Kumar, US assistant secretary for commerce, said the seminar was aimed at bringing together the private and public sectors of Japan, US, and the Philippines to network and discuss their prospects for investments.

“Our primary motivation is to deliver high quality infrastructure solutions for the Philippines… Here in Manila, as in many growing cities, many of you face infrastructure challenges on a daily basis,” Kumar said.

The seminar was seen to rival the influence of China-led AIIB, of which the Philippines is one of the founding members.

Headquartered in Beijing, the AIIB, an international financial institution aiming to support infrastructure in the Asia Pacific region, was believed to be competing against the World Bank and Asian Development Bank.

Despite opposition from US, its allies like Australia, Germany, Britain and South Korea have agreed to join the 57-member bank.