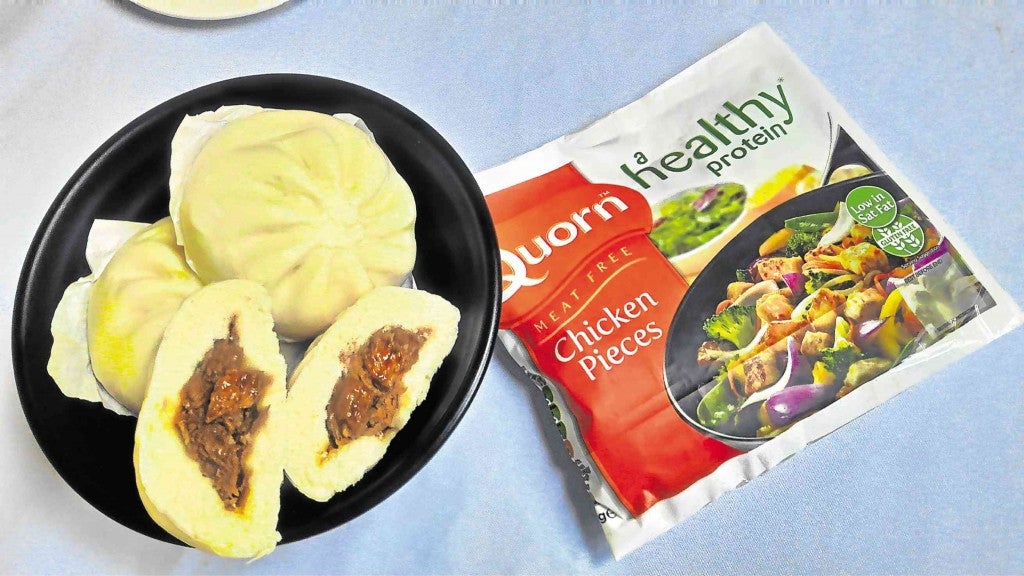 It has the taste and texture of asado ‘chicken’ siopao but not one chicken was harmed. Photo by Tessa R. Salazar

The existence of British-founded meat substitute producer Quorn Foods (which had been acquired in 2015 by Filipino-owned processed foods maker Monde Nissin in a multimillion-dollar deal) comes at a time when worldwide annual consumption of meat and its byproducts have taken on record proportions: from 44 million tons in 1950 to 272 million tons in 2009, or 90 pounds per person, according to Earth Policy Institute president Lester R. Brown in his book “World On The Edge.”

Seen from an environmental perspective, this dramatic rise in the global demand for, and the consequent supply of, meat has helped push the planet to the brink of irreversible climate change.

Studies, like one shown by World Watch Magazine, have shown that 51 percent of annual worldwide greenhouse gas emissions (the primary fuel for warming up the atmosphere) has been attributable to livestock (cattle, buffalo, sheep, goats, camels, pigs and poultry) and the clearing of forests for livestock.

Quorn Foods claims that at its very core, it hopes to tip the scales back to a global ecological balance. And it employs modern food-processing technologies and naturally forming microorganisms to do just that.

Tim Finnigan, Quorn Foods director for Technology and Innovation, recently told Inquirer Science and Health that meat substitutes such as those made by Quorn are already helping consumers transition from an overdependence on meat.

Mycoprotein, a term coined by Quorn Foods, is simply known as a natural form of protein. Quorn Foods CEO Kevin Brennan disclosed to Inquirer Science and Health on Feb. 9 that “mycoprotein is the name given to food produced from the fermentation of the fusarium.”

Finnigan explained that unlike many plant proteins, mycoprotein contains all the essential amino acids, with a PDCAAS (protein digestibility-corrected amino acid score) of 0.996 which, he said, “is close to perfect and in fact is a better than beef protein.”

Finnegan revealed: “Mycoprotein is not grown in a vat, but by the age-old process of fermentation with a modern twist: using ‘airlift fermentation.’ This is amazingly efficient and rely on the introduction of air bubbles at the bottom of the fermenter column, which then rise and fall, causing recirculation and promoting growth. It’s a bit like making beer, except, of course, we are interested not in the liquid part but the growth of our mycoprotein.”

He added: “We can run our fermenters continuously for over 30 days before we stop and clean, then start again. We are literally producing protein from carbohydrate.”

Finnigan related that the search for mycoprotein began in 1964, when Quorn founder Lord Rank decided to act on what he perceived as the impending global protein gap. The group looked for a microorganism that would convert the plentiful starch (carbohydrate) into the less common protein.

He then dispelled the public’s aversion to microorganisms: “Mankind has relied on microorganisms for food for years. For example, the bacteria in yogurt, the fungi in chocolate and cheeses, the fermentation in soy sauce, and the yeast in bread and beer. The microorganism does ‘something to something,’ rather than growing it as a source of protein in its own right.”

In 1967, Lord Rank’s group eventually found what they were looking for, a type of fungi growing in a garden in Marlow in the United Kingdom. Finnigan confirmed that this fungi showed “amazing nutritional properties.”

“Quorn could grow it at scale, but most importantly, we can use the filamentous nature of the tiny plant fibers to create meat-like textures that people enjoy.” Finnigan said that after the discovery, the next 20 years were devoted to research and development to understand more about the fungi, and to ascertain its safety, then create ways to make delicious food.

Finnigan quoted the book “The Diet Myth” (Weidenfeld and Nicolson pp. 137) by Prof. Tim Spector of King’s College London: “Quorn… began by taking the original fungi found in soil and domesticating it in the same way that our ancestors did with many plants.”

Insofar as the other ingredients that go into Quorn products are concerned, Finnigan stressed: “We use only relatively common food ingredients with our mycoprotein in order to create the variety of taste and textures. The creation of the meat-like texture itself relies on mixing the mycoprotein with a little egg and cooking. We then freeze it. The freezing pushes the tiny plant fibers together, creating fibrous bundles that give the meat-like texture. It’s like frozen tofu, When the frozen tofu is thawed in warm water, it becomes a fine-grained, highly absorbent food with the texture of tender meat.”

Brennan revealed that Quorn Foods would soon be launching a vegan range in the Philippines. “We have just completed three years of research and development to produce a vegan range that is a step change above any other vegan food in the world.”

Finnigan added, “The vegan range uses potato protein instead of egg. While these products are new in the market, they are already winning awards. The Quorn Vegan Range has been voted ‘Product of the Year 2016’ in a survey of over 5,000 South African consumers in the Vegetarian Meals category.”

In a Feb. 8 interview, Monde Nissin CEO Henry Soesanto told Inquirer Science and Health that “Quorn’s vision of being the best in helping consumers eat less meat is inspiring and meaningful.” He added that Monde Nissin is “proud to have a brand that offers better products for consumers, and at the same time is better for the planet. Innovation, consumer-focus, uplifting lives and social responsibility are common themes to both companies.”