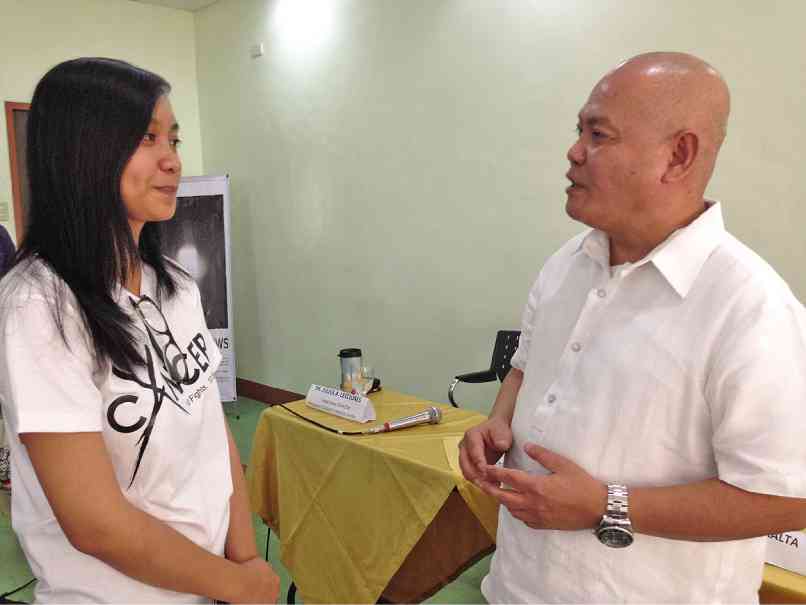 Imagine being a child taken into a hospital room and asked to stay put for hours as an intravenous line is attached to your arm. This routine will be repeated a couple of times a week for many months until the chemotherapy treatment is completed.

This is what Kessa Alvez had gone through nine years ago when, as a 10-year-old grade schooler, she was diagnosed with acute lymphoblastic leukemia (ALL), a quickly progressing cancer involving blood and bone marrow, and is most commonly associated with children.

Alvez, now 19, not only was able to get rid of her cancer but also serves as an inspiration for other children still fighting this most common form of childhood cancer—50 percent of cases in the Philippines—previously regarded as a universal death sentence.

“It was difficult, but I decided not to pay too much attention to the negative aspects of my condition. Instead, I willed myself to be strong and remained positive through prayers,” said Alvez, who was declared cancer-free in 2011. She is now exploring her passion for music, as a student majoring in choir conducting.

Despite the fact that 3,500 new cases are diagnosed each year, the number of survivors has increased. For this, Dr. Julius A. Lecciones, executive director of Philippine Children’s Medical Center (PCMC)—the Department of Health’s (DOH) flagship hospital for children, high-risk mothers and neonates—cited these reasons:

In 2006, Lecciones became the country coordinator for My Child Matters program in the Philippines, an innovative partnership between the Union for International Cancer Control and the Sanofi Espoir Foundation to reduce inequities in childhood cancer survival in low- and mid-income countries.

That year, he initiated at PCMC a unique project that would improve the survival rate of Filipino children with cancer.

Lecciones said: “In 2006, it is quite distressing to witness children prematurely dying of an otherwise curable disease. At that time, only two out of 10 children diagnosed with cancer will survive, in sharp contrast to at least 80 percent survival rate in developed countries. Ten years later, our efforts had yielded positive results in increasing survival from 16 percent to 82 percent.”

He stressed: “Today at PCMC, a significant number of children had been gifted with a happy ending to their otherwise tragic stories.  This is exemplified by the stories of 10 cancer survivors whose journeys of hope and triumph we celebrate today, which is the 10th anniversary of My Child Matters program in the Philippines. Alvez and the rest of these young teenagers are a testament to our patients’ resilience and courage in the face of death.”

Lecciones identified the reasons for the high death rates a decade ago:

From the initial and succeeding financial grants—50,000 euros or about P2.5 million in 2006; 20,000 euros or around P1 million in 2007; and 200,000 euros or P10.7 million in 2013—My Child Matters program in the Philippines was able to increase public awareness and knowledge of how parents and health-care professionals in barangay health centers to spot early signs of cancer in children; increase the expertise of doctors and other health-care professionals in correctly diagnosing cancer even at its early stages so they could immediately refer these young patients to the proper hospitals.

“Through the funding that we received, we are also able to improve our reach from just one, which was previously only at PCMC, to 37 referral networks of public hospitals all over the country where young cancer patients can now avail themselves of the free chemotherapy drugs, antibiotics and antiemetics (drugs against vomiting and nausea, which are side effects of taking cancer medications) as provided by DOH-National Center for Pharmaceutical Access and Management (NCPAM),” explained Lecciones.

He also thanked the government involvement for increasing PhilHealth’s Z-benefit package for ALL to P500,000 from P210,000 for three years of treatment; and the free chemotherapy drug program in public hospitals provided by DOH-NCPAM that had been critical to achieving cure of childhood cancer in the Philippines.

Lecciones said: “What we have achieved thus far are still fragile and will be lost if we do not involve all sectors of society to put childhood cancer in the forefront of the national health agenda. We can only sustain these achievements if we can maintain successfully the engagement of government for active support and involvement. The free chemotherapy program by DOH-NCPAM will end by next year.”

He urged: “Although PhilHealth had increased its Z-package for all to P500,000 from P210,000 for three years of treatment, many other childhood cancers are not yet covered by the Z-package and many of the poor service patients are not yet PhilHealth members. An adequate transition period from the free chemotherapy drug program to PhilHealth must first be done for children with cancer.”