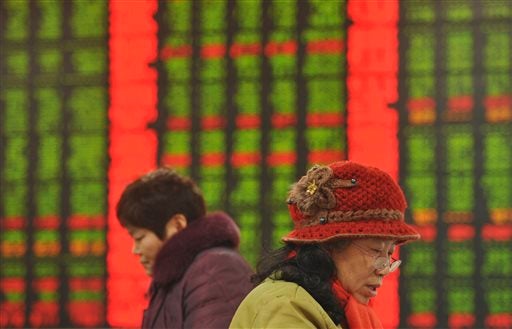 GLOBAL TURBULENCE: Stock markets have taken a beating along with the price of oil as investors believe stock prices have risen too high at a time when the near-term global economic outlook is for modest growth rather than a strong upswing. The IMF lowering its forecast for global growth this year to 3.4 percent, oil falling below $30 a barrel and China’s growth slowing to a 25-year low last year have all contributed to the sell-off this week. The European Central Bank is expected to keep interest rates on hold at ultra-low levels when its governing council meets later in the day as it monitors risks from turmoil in global markets.

THE QUOTE: “The main focus today will be with the ECB meeting result,” Simon Smith, chief economist at FxPro in London, said in a report. “There are no expectations of further policy action, but naturally the euro will be sensitive to hints of easing measures given the recent volatility in financial markets and weakness of the oil price.”

CHINA MOVE: People’s Bank of China said it will inject 600 billion yuan ($91 billion) into financial markets to support medium-term liquidity needs but the move did little to improve investor sentiment. It is “a prudent move ahead of the (Chinese) holidays but seemed to be read as more extreme measures in market (or) economic control from Beijing,” said Gavin Parry, managing director at Parry International Trading Ltd. In Hong Kong.

ENERGY: The price of oil fell again after a brief pause. Benchmark U.S. crude for March delivery was down 30 cents to $28.05 a barrel in electronic trading on the New York Mercantile Exchange. The February contract, which expired Wednesday, dived 6.7 percent, or $1.91, its worst daily drop since September, to close at $26.55 in New York. It was U.S. oil’s lowest since May 2003. Brent crude, a benchmark for international oils, lost 22 cents to $27.66 per barrel in London.