Is the aging bull about to perish?

WE ARE ABOUT to enter the Lunar Year of the Red Monkey on Feb. 8. The monkey is cunning, naughty, exuberant and the smartest of all animals. This sign is seen to bring a lot of volatility in financial markets, requiring a more cautious investing in a more challenging environment.

The consensus view is that the bulls—although subdued by local corporate earnings and macroeconomic growth jitters alongside a number of external headwind in 2015—may perform better this year despite the gloomy opening seen so far. Six out of eight brokerage houses polled by the Inquirer projected the Philippine Stock Exchange index (PSei) rising by the end of the year alongside a double-digit growth in average corporate earnings. At least, two others believe the bull cycle has ended.

Early in the year, the local market has knocked on bear territory, recently falling by as much as 22 percent from the market’s peak closing of 8,127.48 seen on April 10, 2015. The last time the local market touched bear territory was in June 2013, when the US Federal Reserve first hinted about the unwinding of its aggressive monetary stimulus. However, the market then rebounded immediately and even ended the year on a positive note.

Last year, the local stock market lost a total of 278.49 points or 3.85 percent to close 2015 at 6,952.08, ending lower for the first time after a six-year run-up. At its closing level, the index traded 16.84 times consensus earnings for 2016, higher than the historical price to earnings (P/E ratio) of 14 to 15 times and also higher than valuations elsewhere in the region.

This year, forecasts for the PSEi among those who are upbeat for the year range from as low as 7,350 to as high as 8,000, notwithstanding escalating risks from China—where currency devaluation and stock market routs together with hard economic landing fears have been a recurring theme since last year. Alongside other external headwind such as the start of the US interest rate-tightening cycle, geopolitical tension in the Middle East and North Korea and concerns on rising debt in emerging markets—investors are closely looking at the 2016 Presidential elections. Some have described it as a “make or break” catalyst for the Philippines. 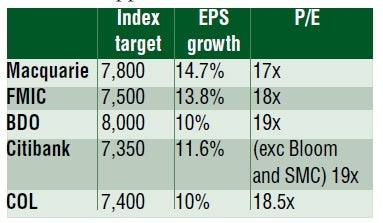 Above is the summary of the 2016 forecasts for some of the key financial institutions that remain optimistic on the PSEi and the underlying earnings per share (EPS) for the year.

“The underlying growth story [of the Philippines] is okay but some people may decide to wait for clarity. As financial assets are relatively expensive, you want a compelling valuation story and a narrative and if you have an election, you have to wait,” Citigroup head of Asia-Pacific economic and market analysis Johanna Chua said in an interview.

In the last couple of years, Chua said the Philippines and India had been among the most loved emerging market stories because they were both “anti-China”—referring to an economic position that is domestic market-driven and import reliant as opposed to China, which was still trying to rebalance its growth engine from mostly an investment-to consumption-driven model.

“But we just have to watch how much asset prices have moved ahead of the story,” Chua said.

Alfred Dy, head of research at CLSA Philippines, said the local stock market was the priciest in Southeast Asia, with investors paying 16.4 times (price to earnings or P/E ratio) the kind of money they are likely to make this 2016.

“For the market to continue to perform, we need to see aggregate earnings growth in the low teens and a new President who can execute well in terms of a good government platform as well as infrastructure projects,” Dy said.

Jonathan Ravelas, chief strategist at Banco de Oro Unibank, said that in three to six months after every Presidential election, the new country CEO was always given a “honeymoon” period. This first quarter of 2016, he said the market was digesting all risks. “But sooner or later we will find value,” he said, noting that the value could be unlocked when investors see the peso stabilizing and see growth in corporate earnings.

Ravelas sees the PSEi retesting the 8,000 levels this year, close to last year’s peak of around 8,100. On the downside, he said the PSEi would likely find support at 6,400 but the strongest support would likely be at 6,000.

Potentially, investors can’t discount the possibility that the local stock market could hit as high as the 9,000 level in 2017 with the assumption that the next President’s administration implements and executes well major infrastructure projects needed to further boost investments.

Based on the latest surveys, Vice President Jejomar Binay is back as the front-runner in the presidential race, followed by Davao City Mayor Rodrigo Duterte, Sen. Grace Poe and former Senator Manuel Roxas.

“It is still early days with survey results in recent months showing significant swings. We believe they will be more reliable around March-April,” Dy said. “By their backgrounds, Poe and Roxas score well in terms of their clean image and good governance platform. Duterte and Binay, on the other hand, score well in terms of their solid track record and execution skills.”

Duterte and Poe are both facing disqualification cases, the former due to technical issues on his candidacy filing and the latter due to questions on citizenship and residency. Binay, on the other hand, is facing a string of corruption charges.

Refuting expectations that the cycle may turn bearish from bullish, Gomez said in a bear market, there would be an across-the-board underperformance of all stocks. “What we have now are pockets of outperformers, pockets of disappointments. But I think there’s a bulk of outperformers. Majority will be be outperformers,” he said.

FMIC is expecting corporate earnings to grow by an average 13.8 percent this year, supporting the PSEi’s rise to at least 7,500 by yearend.

“The bull run is intact. This (2016) is the eighth year. We’re in an extended bull run, the average [bull runs] being 62 months or around five years,” said veteran stockbroker Ismael Cruz, president of IGC Securities.

Although the PSEi ended lower last year, Cruz said 2016 could still be considered part of such an extended bullish cycle.

A bear market is defined as one where stock prices have fallen by 20 percent from the peak and stay there for a period of three months. From a peak of around 8,136.97 on April 10, 2015, this suggested that for the PSEi to turn bearish, the market would have to trade below 6,500 for three months. To date, the PSEi has been in bear territory for the second week.

“A bear market precedes a recession and nowhere is a recession in sight for the Philippines,” Cruz said, noting that the country was expected to sustain an annual growth rate of around 6 percent, the third highest in Asia next to China and Vietnam.

Jose Mari Lacson, head of research at Campos Lanuza & Co. is among those who sees the dawning of a bear market. “We expect this bear market to test the patience of most investors. This bear market will have the legs to keep itself moving over the next six months and possibly for the whole 2016. It will take time for prices to correct to levels that will not reflect the fundamentals under tighter global liquidity and slower economic growth.”

“Despite our cautiously optimistic economic outlook, we are cognizant of several risks and challenges that could temper our positive expectations. On the external front, geopolitical tensions in the Middle East could sharpen volatility in the prices of crude oil in the world market. Prolonged uncertainties could impact the ability of the country to deploy more Overseas Filipino workforce in the region as higher fiscal deficits slow down construction activities in the region,” BDO’s Ravelas said.

“On the domestic side, the impact of the El Niño phenomenon exerts inflation pressure in the first half of 2015, affecting the trend in local interest rates,” he said.

Among the key external headwinds, a key challenge would still be spillover from the economic slowdown in China.

“We don’t see convincing signs that China’s growth is stabilizing. I think China slowdown will continue in two to three years, creating a lot of adjustment for capital goods. It will take a while to pan out and as a repercussion, China will continue to ease policy and even allow the renminbi to weaken,” Citi’s Chua said.

A weakening Chinese currency is, in turn, seen to likewise drag down other currencies in the region especially at this time that the US dollar is on a structural uptrend, especially with the US Federal Reserve having started to raise interest rates.

Another key challenge for the region is a maturing credit cycle, although Chua noted that the Philippines was not vulnerable to this. “When you have built up so much leverage and the economy is slowing down, it becomes less and less efficient. You have to repair your balance sheet. People have to scale down debt and worst case is NPL (nonperforming loan) cycle will go up over time. Even if you give out credit, output is not increasing. You have to pare down debt,” she said.

“The Philippines is still quite low but as slow growth continues for longer, NPLs will get larger and larger and that will impact the credit risk appetite of banks. So, overall credit conditions, while not [leading to] a crunch, may not be as conducive as accommodative. And that will further suppress aggregate demand,” she said.

Overall, Chua said she was optimistic that the investment cycle in the Philippines had a long way to go except that for 2016, there could be some “interruption” due to a mix of domestic politics and global factors.

Across the region, volatility in capital flows is another thing to watch. As the Philippines enjoys a current-account surplus, it is seen relatively more insulated but not immune to bouts of asset sell-offs.

Michaelangelo Oyson, chief executive officer of BPI Securities, is also cautious on the local equities this year, citing what he calls the “climate change in the Chinese economic environment.” He sees market valuations at a “serious risk of compression” as equity risk premium further increases.

“The lack of a clear policy response from China with respect to the Chinese equities markets and its seeming openness to further allow the yuan to weaken may continue to spook investors. Further weakening of the yuan may trigger a currency crisis in some emerging markets. While Philippine economic fundamentals remain robust, I am also cognizant that the volatility in the financial markets could eventually negatively impact the real economy and drive 2016 GDP growth way below 6 percent,” Oyson said.