Is the AlDub phenomenon losing its appeal?

The Eat Bulaga plateau and how the show can get out of it
By: Josiah Go - @inquirerdotnet
Philippine Daily Inquirer / 06:03 AM January 15, 2016 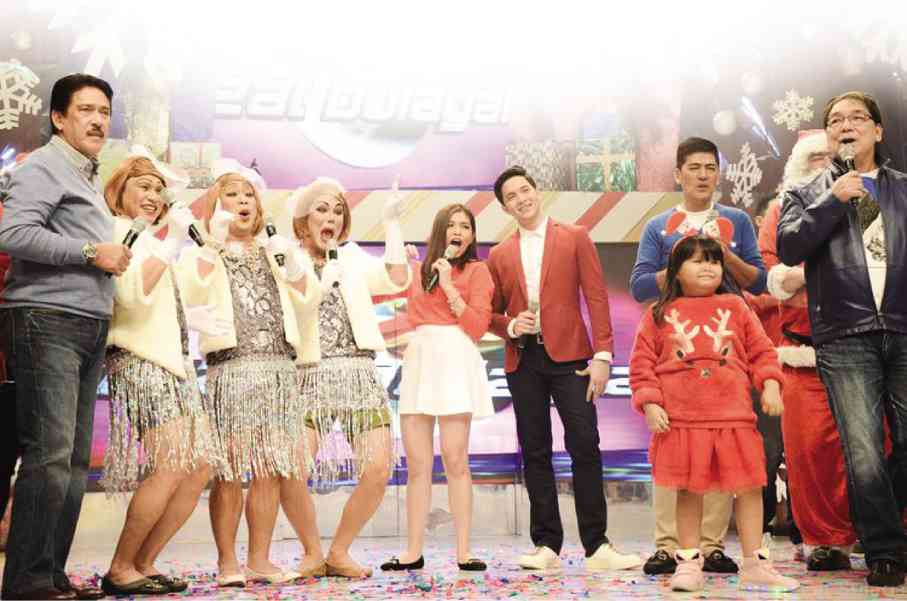 Based on data provided by Kantar Media Philippines, long-running noontime show Eat Bulaga was able to more than double the number of its household viewers in 2015, thanks in part to the AlDub segment. EAT BULAGA PHOTO

These were mostly new viewers from the unserved market, excluding other segments such as overseas Filipino workers.

There are about 20 million total households in the Philippines. With some 15.5 million households owning a TV set, the market potential for noontime TV show viewers is still relatively high. Take note that not everyone is watching TV during noontime.

History Flashback: The last major brand that was able to almost double its number of followers within a three-month period in the Philippines was Pepsi in 1992. Unfortunately, Pepsi wasn’t able to sustain the efforts, having been affected by human error. Remember the infamous 349 crisis?

The company could have gained more had it extended the Pepsi Number Fever promotions. Coke got lucky as Pepsi sustained a self-inflicted injury.

Backtrack even further to 1977 and 1978, way before Eat Bulaga was born—John Travolta was the next big thing in Hollywood, starring in the now-iconic “Saturday Night Fever” and “Grease.” He was certainly a cut above the rest as he did more than just the typical Hollywood roles. When he branched out from his usual image and repositioned himself to do other roles, his movies ended up becoming financial disasters.

It actually took him 16 years to be considered “cool” again, thanks to 1994’s “Pulp Fiction.” He was finally able to garner attention again, for a role that reminded people of who he was in his two early hit movies.

When success is phenomenal, brands and the people behind them may develop overconfidence. There is a tendency to feel powerful and unbeatable, until a blunder or a roadblock happens and forces them to zoom out and look objectively from a different perspective.

At the moment, people may still be gaga over Aldub, but marketing history (examples cited above) will reveal they are not entirely invincible.

Aldub Decoded: In two previous articles, the author hypothesized that new viewers were mainly responsible for the rejuvenated Eat Bulaga that we are enjoying now. They were attracted because the show not just added the Aldub love team (albeit accidentally) within the “Juan for All, All for Juan” segment, but values were also injected within the show via Lola Nidora’s antics.

Eat Bulaga had de facto repositioned itself as an “entertainment plus values” fusion category that became distinguishable from the purely noontime entertainment formula that other networks have been doing. Aldub attracted family oriented households that felt like they shared the same values and sense of humor as Yaya Dub and Lola Nidora.

It wasn’t hard to like because the segment showed familiar themes in Filipino culture. #SaTamangPanahon was popularized when Lola Nidora shared the importance of waiting for the right time to take the relationship to the next level. It was a sure hook for households that wanted to stress the concept of proper “panliligaw (courtship),” something that is not so common in this day and age.

The many values of the Aldub  segment not only differentiated Eat Bulaga from its peers, but more importantly, provided relevance versus pain points expressed by non-customers. Instead of going with the same deprecating humor demonstrated by other shows, Eat Bulaga went the opposite route and became a positive icon beyond the usual “saya (fun)” and “kilig (heart flutter).” (Interestingly, Eat Bulaga also went the same “trash talk” route once and some of the hosts were even accused of more controversial issues. Imagine this case study as a 360-degree transformation.)

Data Review: A review of the latest number of viewers watching Eat Bulaga, as audited by Kantar Media Philippines in November and December 2015, is disturbing.

It showed a rapidly declining base of viewers. From a peak of 6.2 million households viewing last Oct. 24, 2015 when Maine Mendoza, half of the Aldub love team, wished “sana hindi kayo magsawa (I hope you won’t get tired of us),” the number has deteriorated rapidly to only 4 million households after a month on Nov. 28 and 3.5 million on Dec. 6.

This further dropped to 3.3 million on Dec. 19 and finally to 2.65 million on Dec. 26. Eat Bulaga practically lost all incremental customers it gained—losing 3.55 million viewing households in just two months while gaining only a measly 150,000 extra fans despite the numerous product endorsements that aired during the same period.

Critical Changes: Most followers of Eat Bulaga may remember the two critical events that possibly explain the deterioration in the number of viewers.

Mendoza, then better known as Yaya Dub for her role as a caregiver (yaya), was finally able to meet in person the other half of the AlDub couple, Alden Richards, in their much publicized event on Oct. 24 in the Philippine Arena after a strong resistance from Lola Nidora.

Secondly, Mendoza stopped being mysterious, which was part of her earlier allure. Instead of doing the Dubsmash, Mendoza has already revealed her real voice. She was also transformed from an underdog, girl-next-door caregiver Yaya Dub to a more glamorous up-and-coming talent Maine Mendoza.

Still, Aldub is a formidable team to the segment they attract. The couple helped the “My Bebe Love: #KiligPaMore” become a hit during the 41st Metro Manila Film Festival (MMFF). The movie got the biggest opening day gross in local cinemas, beating other Filipino films.

Perspectives: “My Bebe Love” had a limited run in Eastwood, a hangout of one of the show’s new viewer segments. The author watched it in the early evening of Dec. 29, the movie’s fifth showing day, and noticed how the cinema was far from full and actually very quiet throughout the duration of the movie (except for a few parts).

Loyal fans said they will continue to be passionate of their affections for the couple. However, from the perspective of new viewers attracted to the fusion category, making them stay will be difficult for they are still longing for the same drama as the highly quoted #SaTamangPanahon. At best, some may still remain as occasional viewers, who sadly can also turn into lapsed, burnt-out customers.

Most new viewers who originally got into Eat Bulaga because of the fusion category/concept may not exactly be attracted to seeing selected people from a barangay getting prizes from advertisers and sponsors. This was a formula that was done by Eat Bulaga even before the Aldub love team was concocted.

All these things simply please the existing fans. The new viewers may get out of the fad because they’ll eventually realize that they became new customers mostly due to a different value proposition, which is now not as strong as before.

In recent episodes, Lola Nidora was seen trying to revert back to the entertainment plus values formula, but it seems like the focus was not entirely there yet. Perhaps an increased consistent effort and commitment would bring back lapsed and non-customers.

Lessons: At least eight lessons can be learned about the sustainability of market-driving innovation in service, formerly seen in Eat Bulaga. As mentioned above, the numbers have switched—from a peak of 6.2 million viewers to only 2.6 million. These lessons are:

To make Mendoza co-host or do out-of-character roles in Eat Bulaga is not being different, and for now, not even being better, beyond her new found popularity. Aldub will just become another love team if this keeps up.

Imagine that ABS-CBN has more resources and a greater market reach. It could easily fill in the values void with a new segment, as it had possibly gained lessons from three successive incorrect responses (three top love teams guesting, Coliseum event, Pastillas Girl) catering to needs of existing viewers instead of new viewers.

Who knows, TV 5 may just get a headquarter mandate to jump in and tap the synergies of their sister companies in media, telecom and related businesses.

That’s the most exciting market-driving strategy in show business, a true fusion of entertainment and values. Hindi lang saya at kilig, but also saya, kilig at laman (Not just fun and heart-fluttering shows, but segments that have content).

(Josiah Go is the chairman of marketing training and advocacy firm Mansmith and Fielders Inc. To read his marketing articles or his interviews with business thought leaders, visit www.josiahgo.com. For Josiah Go’s seminars in Market-Driving Strategy or Business Model Innovation, please visit www.mansmith.net)

Hand signal? We could have just met with Sotto sans Lacson, says Robredo