US stocks plunge as 2016 rout worsens 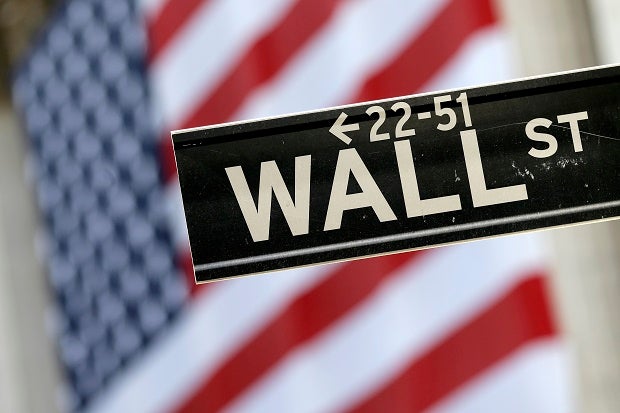 In this Tuesday, Sept. 8, 2015, file photo, a Wall Street street sign is framed by a giant American flag hanging on the facade of the New York Stock Exchange. Global shares were mixed in trading, Wednesday, Dec. 30, 2015, with only some markets cheered by an overnight rally as investor sentiment grew cautious on lower oil prices. AP

It’s been a turbulent ride for stock market investors this year and it got worse Wednesday.

A broad downturn in U.S. stocks on another volatile day for crude oil prices knocked the Standard & Poor’s 500 index down 10 percent from its November peak.

That’s known as a correction on Wall Street, and it’s the second time in less than five months for the S&P 500 index, which is regarded as the bellwether for the stock market.

The Dow Jones industrial average also tumbled, losing more than 300 points before closing within 25 points of its own correction level.

READ: How to deal with losses in the stock market | World could face months of Chinese market aftershocks

The rocky start to the year reflects mounting worries on Wall Street about a slowdown in the global economy, plunging oil prices and the implications for U.S. companies. It also deepens the pain for many investors after a flat year of returns for the stock market last year.

The S&P 500 index is now down 7.5 percent this year, while the Dow is off 7.3 percent. The Nasdaq is deeper in the red, down 9.6 percent. The Russell 2000, which is comprised of small-company stocks, is now down 20 percent from its June peak. That big a plunge is defined as a bear market.

“At the very core of this there’s a bull-bear debate,” said Quincy Krosby, market strategist at Prudential Financial. “Whether or not we’re headed into a recession. That’s the debate. Are we gaining the momentum in the economy to justify the valuation in the market?”

Energy and consumer stocks bore the brunt of the selling on Wednesday. The price of U.S. crude oil closed slightly higher, but remains near $30 a barrel, a level that investors fear could force many oil and gas company to go bankrupt. Brent crude, the international standard, fell 2 percent.

Some of the biggest winners from last year, such as Netflix and Amazon, both of which doubled in value in 2015, also fell sharply.

“The momentum names that drove this market higher have just been clobbered,” Krosby said.

All the sectors in the S&P 500 index ended sharply lower, with consumer discretionary stocks faring the worst, down 3.4 percent.

Biotechnology stocks also took a drubbing. The Nasdaq Biotechnology index lost 5.3 percent and is down 17.2 percent this year.

The market was coming off its best day this year and appeared to be headed for more gains early in the day. A report showing that China’s exports fell less than expected in November helped lift the market. The price of crude oil rebounded more than 3 percent in the first hour of regular trading.

The trend didn’t hold for long, however, as oil prices began to swoon following a report showing that demand for fuels slipped last week. Investors also began size up to discouraging earnings outlooks from Ford Motor and auto parts supplier BorgWarner. Ford fell 65 cents, or 5.1 percent, to $12.20. BorgWarner lost $3.56, or 9.5 percent, to $33.84.

Energy companies got hammered despite the rare gain in U.S. crude prices.

Traders are increasingly worried that a plunge in the price of crude to near $30 a barrel will lead to more strain, layoffs and bankruptcies for oil and gas companies.