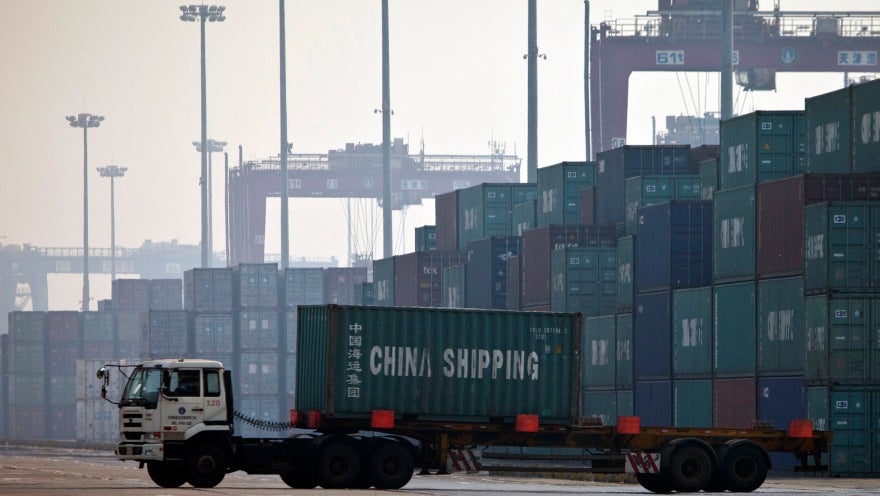 China’s customs has reported that the volume of its trade has fallen seven percent year on year. AP FILE PHOTO

It was far below the government’s target of six percent growth in trade, and the fourth year in a row that external commerce had missed its goal.

China’s imports slumped 13.2 percent on the previous year to 10.45 trillion yuan, Customs said, while exports were down 1.8 percent to 14.14 trillion yuan.

The figures put in doubt China’s title as the world’s biggest trader in goods. US trade figures will not be released until February, but for the first 11 months of the year US trade in goods amounted to $3.48 trillion on a total balance of payments basis, according to figures from the US census bureau.

Nonetheless a spokesman for China’s Customs said in a statement that “foreign trade of private enterprises shows vitality”.

“Progress has been made in efforts to diversify trade partners,” the spokesman added. The European, US and the Association of South-East Asian Nations are China’s top three trading partners.

ADVERTISEMENT
Read Next
Oil prices fall below $30 a barrel
LATEST STORIES
DAY6 is for everybody
Mos Burger to open in Manila; teases with a pop-up
In ‘Jojo Rabbit,’ Comedy and Drama Collide
How to help the Taal evacuees
Margot Robbie talks about filming ‘Bombshell’s’ disturbing sexual harassment scene
MOST READ
OSG plea to revoke ABS-CBN franchise ‘a duplicitous move’ – Lacson
It’s too early to present Duterte’s ‘legacy’ – Lacson
Steam emission over Taal’s main crater ‘steady’ for past 24 hours
Jake says relationship with Shaina ‘goes beyond physical attraction’
Don't miss out on the latest news and information.

Anti-Trump protests have shrunk. What’s it mean for 2020?