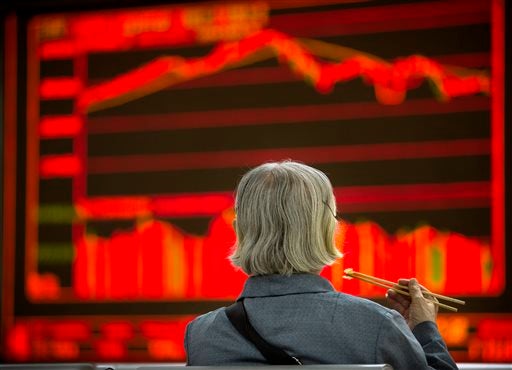 A Chinese investor eats lunch as she monitors stock prices at a brokerage house in Beijing, AP File Photo

HONG KONG, China — Shanghai stocks swung sharply in early trade Tuesday fueled by ongoing worries about China’s economy while most other Asian markets enjoyed a small bounce a day after suffering another painful sell off.

Having sunk more than five percent Monday — taking its losses this year to 15 percent already — Shanghai rallied in the first few minutes before quickly slipping into the red then bouncing back.

The swift movements have become common on the volatile index, which has been hammered by a string of weak economic data out of China, while authorities’ bungling of last week’s rout has also sowed doubt.

Beijing’s weakening of its yuan currency — raising questions about the opaqueness of its exchange rate policy — also played a key role in the equities downturn.

That has in turn led to massive losses around the world, with several major bourses suffering their worst start to a year on record.

Shanghai was up 0.2 percent in mid-morning trade, while Hong Kong, which also tumbled Monday, was up 0.6 percent.

Tokyo, which was closed Monday for a holiday, slipped 2.12 percent by lunch as dealers there played catch-up with the rest of the region and the yen strengthened against the dollar.

The Japanese unit has risen more than two percent on the greenback so far this year.

US markets provided some positivity, with the Dow and S&P 500 moving higher. However, investors remain on edge over China, while oil prices head towards $31 a barrel, hit by a supply glut, anemic demand and a weak global economy.

Crude slipped below $32 for the first time in 12 years on signs key producer Iran could be allowed to export the commodity within weeks as the West prepares to lift embargoes after a deal over its nuclear program.

On Tuesday morning US benchmark West Texas Intermediate was down 0.7 percent and Brent lost 0.6 percent.