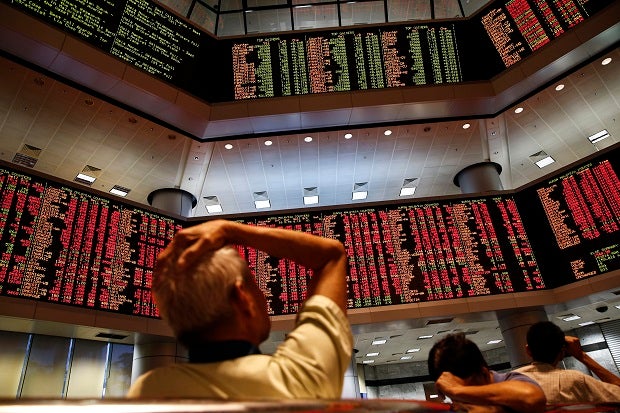 People watch trading boards at a private stock market gallery in Kuala Lumpur, Malaysia, in this file photo. Stocks tumbled across Asia on Monday as another round of tepid data added to concerns about China’s economy. AP

HONG KONG, China — Asian shares tumbled again Monday as another round of tepid data added to concerns about China’s economy, which is already responsible for sparking a rout across global markets at the start of the year.

After enjoying some minor relief on Friday, the region’s trading floors were once again swathed in red as panicking investors dumped equities while oil prices also headed south, sitting around 12-year lows.

The gains at the end of last week were not enough to help US and European markets, which ended deep in negative territory as a strong US jobs report was overshadowed by fears about China and its leaders’ ability to manage a slowdown.

“People are also quite nervous about the Chinese economic outlook. China is certainly slowing on a very gradual path down. A lot of people are fearing a hard landing is in play.”

On Saturday official figures showed Chinese consumer prices picked up slightly in December but inflation remained about half the government’s target. Prices paid at the factory gate, a guide to future inflation, also sank for a 46th consecutive month.

The figures are the latest highlighting the weakness in China, which is expected to have grown in 2015 at its slowest rate in a quarter of a century.

In early trade Monday Shanghai slumped two percent at one point before paring the losses to sit 1.2 percent lower, while Hong Kong gave up 2.3 percent, Sydney shed 1.9 percent, Seoul slipped 0.9 percent and Singapore was 2.0 percent off. Tokyo was closed for a public holiday.

Investors extended losses from last week, which was one of the worst starts to a year on record with dealers rattled after trade was suspended twice in four days in Chinese markets. Shanghai ended the week about 10 percent lower, in echoes of a sell-off that fuelled global turmoil in the summer.

And on Wall Street, the Dow and S&P 500 lost about 6.0 percent, marking the worst opening week of a year in the history of either index.

Beijing’s bungling of the handling of the crisis added to the nervousness.

“Chinese equities have had a tough start to the year. This has flowed around the globe, kneecapping equities, where valuations were already deemed to be stretched,” Mark Smith, a senior economist in Auckland at ANZ Bank New Zealand, said.

“A weaker inflation outlook and heightened market volatility has also swung the pendulum back to more policy support.”

Oil prices continued their slump, with both main global contract dropping around two percent on Monday, with the crisis in China — the world’s biggest energy user — adding to a worldwide glut, weak demand and a strong dollar.

Worries about the global outlook also pushed up the price of gold, which is considered a safe investment in times of uncertainty. The precious metal, which is up more than three percent so far this year, bought $1,105 an ounce Monday.