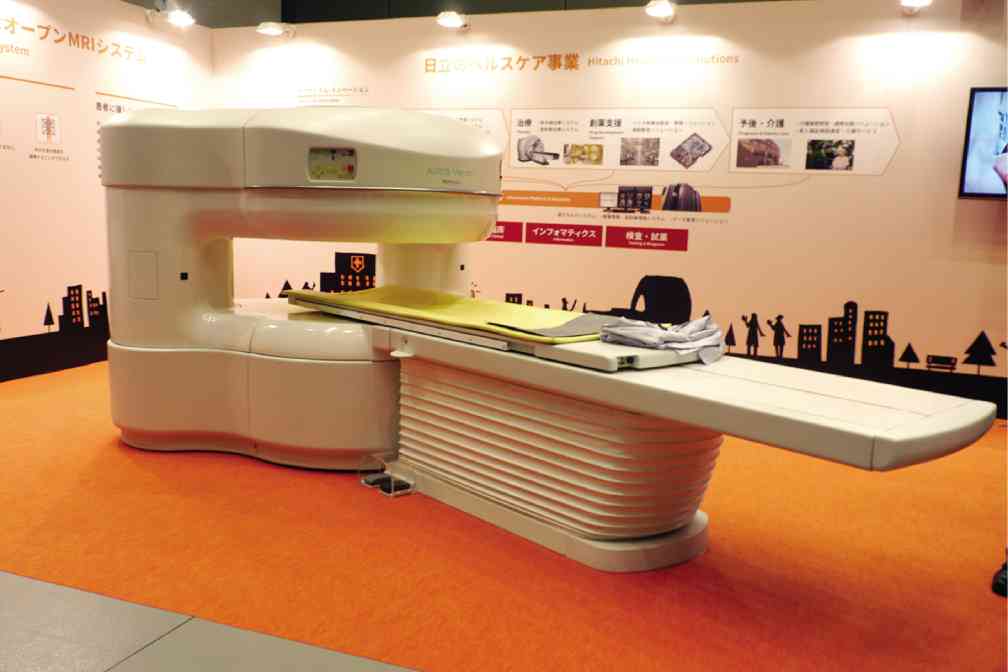 Tokyo—Mass production is out, customization is in.

For the century-old conglomerate and engineering behemoth Hitachi Ltd, “customization” and “collaboration” are the new trends in business, particularly in the area of social innovation—the business of solving the world’s most pressing problems.

“Commodity, mass production, mass consumption, these are no longer for the era that we live in. Now it is mass customization,” Hiroaki Nakanishi, Hitachi’s chair and CEO, said in an opening speech during the recent two-day Social Innovation Forum 2015 here.

“We want a product that will truly suit yourself. That is the direction we would like to pursue,” Nakanishi said.

During the annual forum which the Japanese company has been organizing for years even before it launched its Social Innovation Business in 2009, Hitachi showcased its infrastructure technologies and IT solutions.

But more than these that give life to Hitachi’s slogan, “Inspire the Next,” visiting journalists caught a glimpse of the values and mind-set of this company, which is best known as the builder of the high-speed train—Shinkansen.

A multinational company earning an annual revenue of 9.76 trillion yen, Hitachi started as a small repair shop founded in 1910 by engineer Namihei Odaira.

But Odaira was not satisfied with merely repairing machines developed by foreign companies, said Atsushi Konno, Hitachi’s general manager for corporate communications, in a briefing with reporters.

The Hitachi founder, driven by the strong desire to outdo foreign technologies then, invented the five-horsepower motor in 1910, marking the beginning of Hitachi’s innovation work. 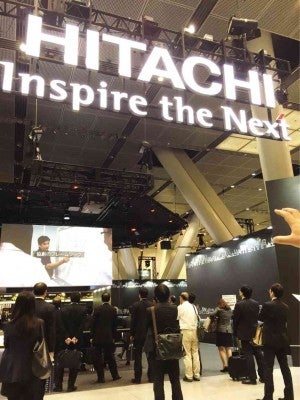 “Harmony, sincerity, and pioneering spirit” were the prevailing attitudes of Hitachi at the very start,” Konno said.

With a presence in Europe, North America, and Asia, the company embarks on big ticket infrastructure projects with big firms and governments among its clients.

During the social innovation forum, Nakanishi stressed the company’s focus on customization, as part of its thrust to move away from the rigid system of mass production via an assembly line.

It recently launched “Nexperience,” a systematic process to facilitate its “collaborative creation” with customers.

“This sounds nice but starting this is not easy,” Nakanishi said.

Through the “Nexperience” process, Hitachi seeks to “share challenges and knowledge” with customers and partners to develop solutions to societal challenges.

Its Global Center for Social Innovation in Tokyo houses the “customer collaboration creative space,” which is equipped with a presentation room, meeting rooms, and a lounge area which overlooks Tokyo’s famed skyline.

The space is a picture of the future with large touch-panel displays and a touch screen table aiding Hitachi in its in-depth discussions and brainstorming activities.

Konno said Hitachi planned to replicate the “Nexperience” to its regional social innovation centers in North America, China and Europe.

The creation space in Tokyo shows Hitachi’s openness to come up with better solutions to challenges.

“The energy (sector) is expected to change significantly. In terms of urbanization, half of the world’s population live in the cities.  We can be wiser and smarter in addressing these changes,” Nakanishi said.

One example of innovation solving social challenge was presented in 2010, when Hitachi helped Male in Maldives solve its water problem.

Malé, the island capital city of the Maldives, lacked sources of drinking water like rivers or lakes.

It heavily relied on rain and ground water, which were not enough to supply its needs.

Male has run out of space to store rainwater while groundwater has increasingly become unsuitable for drinking due to contamination from sewage and salinity from seawater.

Another important breakthrough for Hitachi was the development of the Kashiwa-no-ha Smart City, a “future” city using the latest technologies in addressing issues such as energy conservation.

Located in Kashiwa City in Chiba prefecture, the smart city is a 30 minute-ride away from the Akihabara Station in Tokyo.

The city, which used to be a vast golf course owned by real estate developer Mitsui Fudosan, was born out of a partnership among the government, private sector, and the academe. 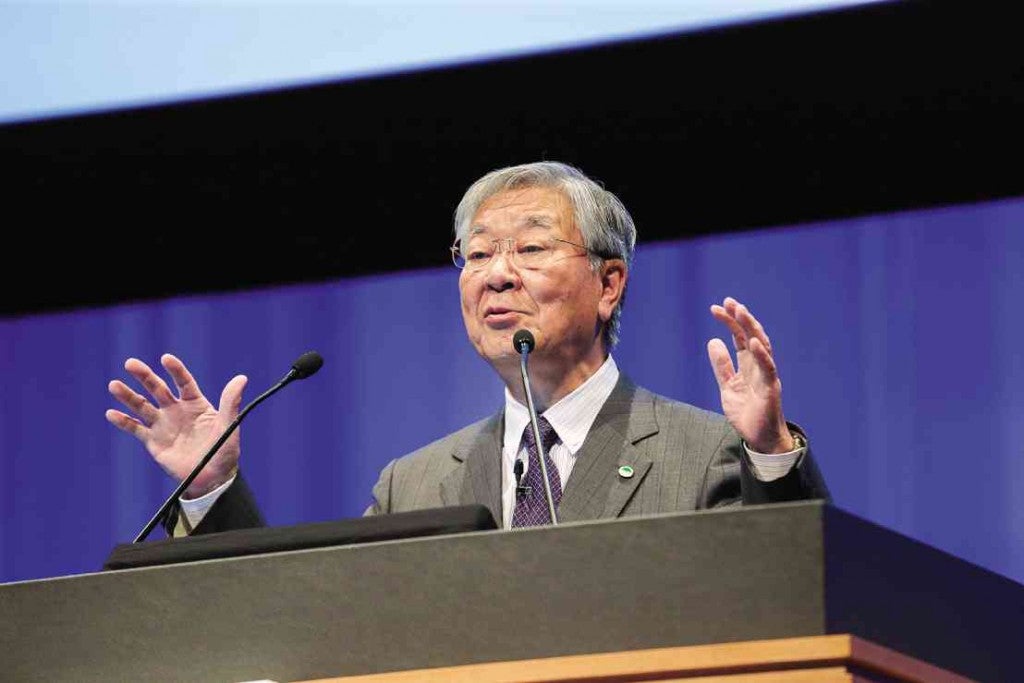 The discussions on the collaboration began in 2009 with the aim to create a model city that can deal with modern-day challenges, Akihiko Tobe, general manager for Hitachi Ltd’s business and engineering solutions division, said.

In 2011, a devastating magnitude-9 earthquake and tsunami shook Japan. In some cities, elevators were shut down, stranding the elderly residents in high-rise buildings.

Thus, the area energy management system (AEMS), which predicts the energy supply and demand in the area and provides residents with up-to-date information, was instituted.

All information goes through the Kashiwa-no-ha Smart Center, which oversees energy operations for the community.

It monitors electricity use in residences, commercial facilities, and offices.

Tobe said the goal of the city was to optimize energy use and take advantage of the available renewable resources using  solar panels, wind power equipment, well-water and rain water.

It likewise cuts down its CO2 emissions by drawing on waste biogas, exhaust heat from cogeneration systems and other untapped energy.

In one lot where bicycles and electric cars are parked, the residents of the smart city are free to use its multivehicle sharing service, an environmentally friendly setup that leverages ICT (information and communication technology) to ensure the proper use of automobiles, bicycles, and other personal means of getting around, as well as public buses and trains.

Tobe said the Kashiwa-no-ha development would be carried out in two stages.

With the first stage already complete, the city will be expanded to include the National Cancer Hospital East, Kashiwa-no-ha Campus of Chiba University, and Konbukuro Pond Natural Museum Park.

For Hitachi, the Philippines is an important market in Asia, having a “strong and stable economy,” Nakanishi said in a press briefing with reporters.

“The current president said the Philippine economy is very strong. I think so, too,” Nakanishi said.

The Japanese CEO noted that infrastructure projects would be “the first step” in the company’s partnership with the Philippines.

Hitachi established its presence in the Philippines in 1930, when it delivered the first 60 HP hydro turbine to a power station in Davao. From 1930 to 1960, it has been supplying generation equipment and power transformers to the Philippines.

Nakanashi noted Hitachi’s interest in participating in the Philippine government’s plan to improve the transportation network in Metro Manila.

“On the case of the subway, we have already started the discussions on making clearer feasibility studies about that,” he said.

Nakanishi explained that Hitachi had a clear advantage in building and managing railway systems.

In September this year, Hitachi opened a train factory in the United Kingdom to support the Intercity Express Programme of the UK government and to prepare for its future expansion in Europe.

Employing 700 people, it will produce trains for the East Coast Main Line and Great Western Main Line as well as AT200 commuter trains for Scotland.

“We are keen on the Philippines. We are looking at railways because that is one of our core businesses,” Konno said.

Hopefully, that will just be the first of many sectors that will benefit from Hitachi’s avowed success in innovation.