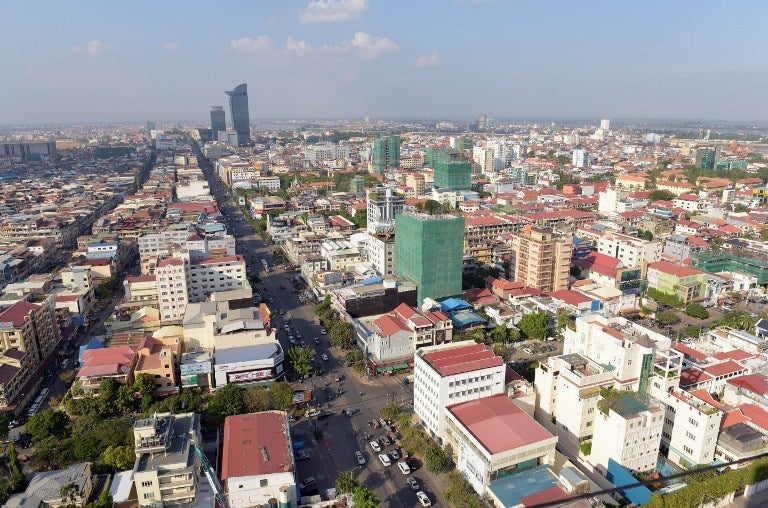 This photo taken on December 15, 2015 shows an overhead view of Phnom Penh. From glitzy malls and high-rise flats to five-star hotels, a luxury building boom in Phnom Penh is transforming a capital once reduced to a ghost town into one of Asia’s fastest growing cities. AFP

PHNOM PENH, Cambodia — From glitzy malls and high-rise flats to five-star hotels, a luxury building boom in Phnom Penh is transforming a capital once reduced to a ghost town into one of Asia’s fastest growing cities.

Inside the recently opened Aeon Mall in the heart of Phnom Penh, Cambodia’s first mega shopping centre, shoppers and curious residents flock to see the latest Levi’s and Giordano handbags, snapping selfies in front of a giant Christmas tree.

It is a common scene across much of Southeast Asia but was previously unimaginable for many in Cambodia where around 20 percent of people still live on less than $1.25 per day.

But while poverty remains entrenched, a fast-growing middle class and elite are increasingly looking for local ways to spend their cash.

“I am glad we have such a modern mall in Phnom Penh. It shows the city is growing,” says 20-year-old Bopha, a well-heeled university student who said her family made more than $1 million in a recent land sale.

Bopha said she used to have to travel to Thailand and Singapore for her shopping trips but that was now changing.

“Their cities are crowded with high-rise towers. I think we are heading in the same direction to be like them,” she beamed.

The $200 million Japanese-built mall is just one of dozens of new shopping complexes, condominium projects and hotels springing up in Phnom Penh as Cambodia rides a wave of high economic growth rates in recent years.

The capital is second only to Laos in East Asia for the fastest rate of urban spatial expansion, according to the World Bank, and its economy is expected to grow at 6.9 percent this year.

– Rise of the high-rise -All across the city luxury high-rise condos are popping up with names like “The Peak” and “Diamond Island”, complete with billboards promising aspirational taglines such as “Sophisticated Urban Living”.

According to the government, Cambodia drew construction investment worth $1.75 billion in the first nine months of 2015, a 13.7 percent rise from a year earlier.

Many of the new entrants into the kingdom’s building market are developers from Japan, China, South Korea and Singapore.

The 39-storey Vattanac Capital Tower, Cambodia’s first skyscraper which was finished in 2014, is designed in the shape of a dragon and incorporates Chinese traditional feng shui principles.

A few kilometres (miles) away, the local Overseas Cambodia Investment Corporation is drawing from the country’s past, building Parisian-style apartments framed by a replica of the Arc de Triomphe on a riverside complex in downtown Phnom Penh.

But some are worried where the construction frenzy will leave a city once famed as the “Pearl of Asia”.

In its French colonial heyday Phnom Penh was regarded as one of the loveliest cities in Southeast Asia thanks to its wide European-style avenues, carefully manicured gardens and picturesque stately homes.

Just a few decades later, the buzzing city was reduced to a ghost town when Pol Pot’s brutal Khmer Rouge army seized control of the capital and ordered its two million people to evacuate.

The city has been coming back to life since the radical communist regime was toppled in 1979 but the surge of activity and change to its landscape has intensified in recent years.

– Poor pushed to city fringes -Silas Everett of The Asia Foundation in Cambodia fears the city’s original charm is fast disappearing with villas and stately buildings from the colonial era being torn down to make room for lucrative new construction projects.

“Phnom Penh’s architectural heritage is world renowned… Yet the rate of destruction of these buildings of significant cultural heritage is alarming,” said Everett, mourning in particular the loss of buildings designed by famed Cambodian architect Vann Molyvann.

And while wealthy Cambodians are lining up for a chance to live in some of the city’s most coveted new addresses, the urban poor are increasingly relegated to the edges of the capital where many were evicted to make way for commercial developments.

Critics of strongman premier Hun Sen, who has ruled with an iron fist for the last 30 years, say he has turned Cambodia into a notoriously corrupt fiefdom where those loyal to him are handsomely enriched.

But he remains unapologetic about the capital’s rapid transformation.

Phnom Penh, he said during a speech in November, would have been a “coconut plantation” had the Khmer Rouge remained.

Instead, he added, “an already dead city survived through the bare hands of our people”.

Not everyone has benefited, however.

Strolling through Aeon Mall, Seng Seat, 60, says most of the products remain outside her budget.

“The price of some clothes and shoes at the retail brand shops is too expensive,” Seat said.

“I just had a look at the price and left immediately.”

Read Next
Break away from debt, breakthrough for wealth
EDITORS' PICK
Enjoy the best of city living at SMDC’s Fame Residences
Step up your vlog game with vivo’s newest smartphone
EDITORIAL: Solo parents deserve more
Guanzon: Senator behind delay in Marcos DQ case
No more need to quarantine foreign arrivals if fully vaxxed
NUSTAR Resort and Casino: Cebu’s next lifestyle and leisure gem
MOST READ
Guanzon to Bongbong Marcos camp: How do you know I had ‘minority opinion’ on DQ cases?
Guanzon gives Ferolino until Monday to release reso on Bongbong Marcos’ DQ cases, or else
Guanzon: Senator behind delay in Marcos DQ case
Marcos a no-show in another GMA interview
Don't miss out on the latest news and information.