Canada, Mexico win WTO nod for $1 bn sanctions against US 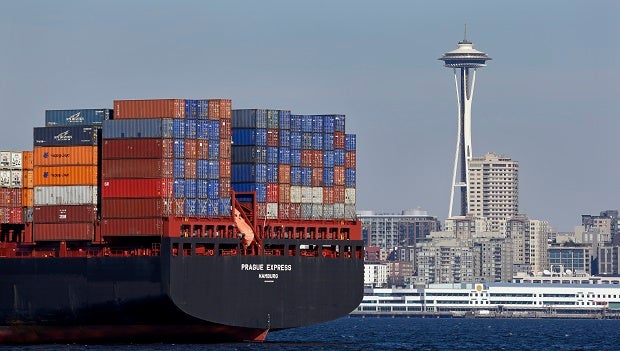 In this Feb. 15, 2015 file photo, the Space Needle towers in the background beyond a container ship anchored in Elliott Bay near downtown Seattle. The U.S. trade deficit widened in October 2015 as exports of U.S. goods fell to the lowest level in more than four years, a reflection of the impact of a weak global economy and stronger dollar. The Commerce Department says the trade deficit widened 3.4 percent in October to $43.9 billion, compared to a revised $42.5 billion deficit in September. AP File Photo

WASHINGTON, United States—Canada and Mexico won WTO approval Monday to impose up to $1 billion a year in trade sanctions against the United States over its country-of-origin labeling requirement for beef and pork.

An arbitration panel at the Geneva-based World Trade Organization ruled that the US policy, known by its acronym COOL, was unfair because it puts imported livestock at a disadvantage to domestic livestock.

The panel concluded that Canada and Mexico, partners with the US in the North American Free Trade Agreement, could apply retaliatory tariffs on US goods exports.

Canada, the largest US trade partner, is authorized to impose up to Can$1.05 billion (US$780.3 million) in sanctions annually, while Mexico, the second-largest partner, can levy up to $227.8 million a year in retaliatory tariffs.

The labeling law, popular with US consumers for giving greater transparency to their food purchase, was enshrined in the 2002 Farm Bill. Congress strengthened it in 2013, even as Canada and Mexico were challenging the policy at the WTO.

Ottawa and Mexico City, as well as the US meat industry, have campaigned against COOL as an unfair and costly burden on producers.

“Country of origin labeling harms Canadian and Mexican livestock producers as well as US processors and producers. It also disrupts the highly integrated North American meat industry supply chain,” the Canadian government said in a statement after the WTO ruling.

“Since 2011, the World Trade Organization has repeatedly ruled that COOL discriminates against Canadian and Mexican cattle and hogs and violates the trade obligations of the United States,” it said, reiterating its call for repeal of the law.

The Mexican government said the retaliation would begin “shortly.”

Mexico “calls on the US government to eliminate this measure, which, in addition to discriminating against Mexican livestock exports, has severely affected the trade integration of the North American region’s market in the production of livestock and meat products,” the Mexican economy ministry said.

President Barack Obama’s administration moved Monday to defuse the WTO decision, saying it would work with the US Congress on alternatives to the labeling law.

“We are disappointed with this decision and its potential impact on trade among vital North American partners,” said Tim Reif, general counsel for the Office of the US Trade Representative, in a statement.

“We will continue to consult with members of Congress as they consider options to replace the current COOL law and additional next steps. In the meantime, if Canada and Mexico take steps to raise import duties on US exports, it will only harm the economies of all three trading partners.”

The US Chamber of Commerce said it had sent a letter to all members of Congress urging “a complete repeal” of the COOL rule.

“The stakes are high: Canada and Mexico are by far the largest export markets of the United States. Trade with our two North American neighbors reaches $1.3 trillion annually and supports nearly 14 million US jobs,” the Chamber wrote.

Advocacy group Public Citizen, which opposes the recent Trans-Pacific Partnership deal and a pact being negotiated with the European Union, the Transatlantic Trade and Investment Partnership, pointed to the WTO decision as an example of how trade agreements can undermine the public interest.

“We hope that President Obama stands by his claim that ‘no trade agreement is going to force us to change our laws,'” she said.

“But in fact rolling back US consumer and environmental safeguards has been exactly what past presidents have done after previous retrograde trade pact rulings.”

Vietnam accuses US of flooding stores with cheap chicken