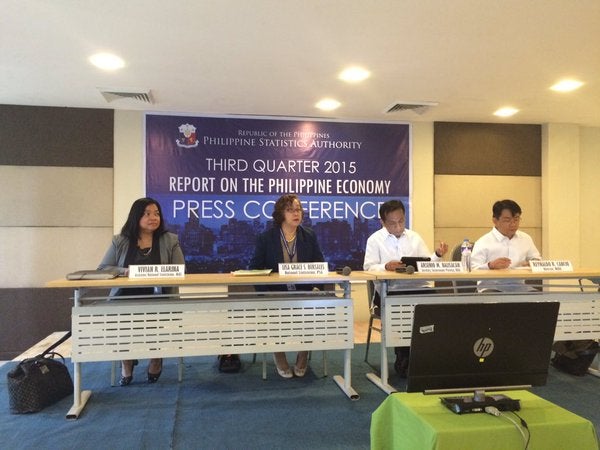 Officials of the National Economic Development Authority and the Philippine Statistics Authority announce the GDP growth of the country for the third quarter of 2015. BEN DE VERA/PHILIPPINE DAILY INQUIRER

The Philippine economy grew at its fastest pace so far this year during the third quarter, as the gross domestic product (GDP) expanded by 6 percent during the July to September period.

The third quarter GDP growth figure was higher than the 5 percent posted in the first quarter and the adjusted 5.8-percent growth during the second quarter.

The economic growth registered between July and September also exceeded the dismal 5.3 percent recorded in the third quarter of last year, which was mainly blamed on government underspending.

Economic managers earlier noted of improved government spending on public goods and services during the first nine months, which was expected to support faster economic growth despite slower exports.

The government’s official GDP growth target for 2015 is 7-8 percent, but economic managers had already conceded that the economy could expand this year at a “realistic” range of only 6-6.5 percent.

The economy should grow by an average of 6.6 percent in the second half to reach the lower end of the “realistic” figure.

The Philippine economy grew by 6.1 percent in 2014, lower than the 2013’s GDP expansion of 7.2 percent. Despite slower economic growth last year, the Philippines remained among the fastest-growing economies in Asia.