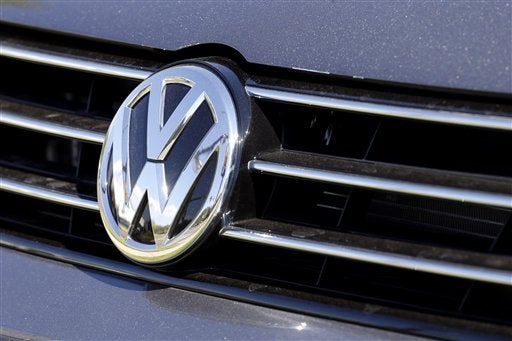 In this Thursday, Sept. 24, 2015, file photo, the grille of a Volkswagen car for sale is decorated with the iconic company symbol in Boulder, Colo. Germany’s Volkswagen, already reeling from news that it had cheated on U.S. tests for nitrogen oxide emissions, said Tuesday, Nov. 3, that an internal investigation had revealed “unexplained inconsistencies” in the carbon dioxide emissions from 800,000 vehicles that could cost the company another 2 billion euros ($2.2 billion). AP

FRANKFURT, Germany — Volkswagen shares are falling after the company said it had understated carbon dioxide emissions for 800,000 cars, adding to the downbeat news from its scandal over cheating on U.S. diesel emissions tests.

The carmaker said Tuesday after the European market close that it found “unexplained inconsistencies” in carbon dioxide emissions in some vehicles.

The company found the additional problem as it investigated revelations that up to 11 million of its vehicles had software that allowed them to deceive emissions testers.

The announcement follows U.S. allegations that the defective software was also found in cars sold under Volkswagen’s elite Porsche brand. CEO Matthias Mueller has promised the company will “relentlessly and completely clarify the matter.”