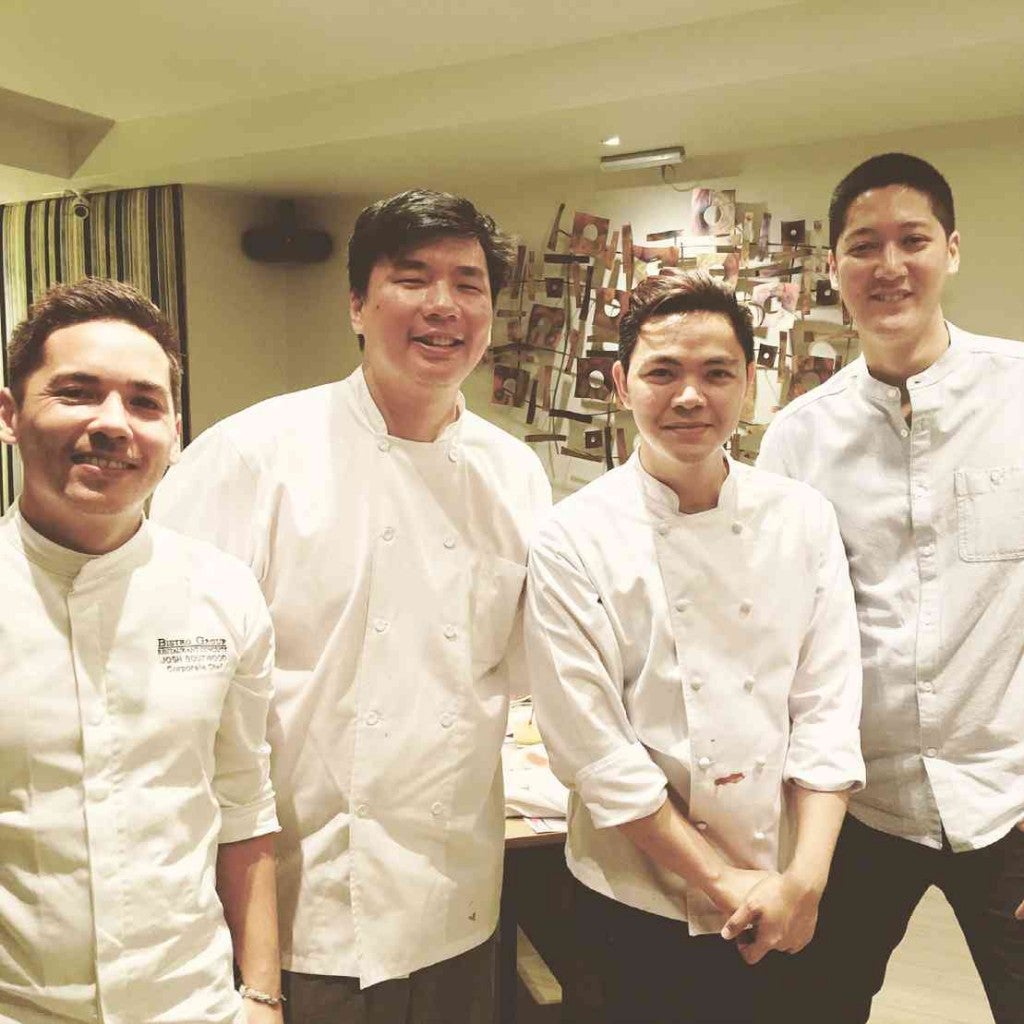 The Philippines truly has so many talented chefs, far more than the usual suspects highlighted by Instagram groupies of food PR professionals. The revamped F&B World magazine, now called F&B Report, with Angelo Comsti at its helm, is on a mission to expose these chefs, one pop-up at a time.

The three were challenged to create “monochrome” dishes. Each chef had to serve two to three courses, each devoted to a chosen color. And true to the event’s title, guests all ate “in living color!”

The menu started with a pale Yellow, with Chef Mark Tan mixing a cold starter that the menu simply described as “corn, crab and seasonal seafood.”

But as was established throughout dinner, the menu was far more complicated than it appeared on print.

The starter was in fact sweet corn mixed with a stock with vermouth, made into a powder, then mashed with ceviche of Thai snapper. Of course when you bite into it, your mind doesn’t process all the ten million steps that went into making this, except to say, “Mmmm, good!”

Salad was the color Purple. The menu described Chef Josh Boutwood’s creation as simply “cabbage and beetroot” but again, it was far more complicated than that.

Boutwood braised cabbage for four to six hours at low temperature to get it “nice and meaty,” sliced it then grilled it. Then a sauce was made out of beetroot. “When you cook beetroot, it tends to be red,” Boutwood, formerly of Alchemy in Boracay, explained, “But when you add acidity to it, it turns purple.” To add a bit of saltiness, Boutwood brushed a bit of chorizo paste and incorporated tiny bits of pancetta. It was savory yet healthy, sophisticated yet comforting. This was my favorite dish of the night.

The first main was Green, another round by Mark Tan. Allium’s chef likes mixing seafood and beef—at another event he meshed a Mayura Wagyu tartare with oysters—and true to form, did it again at this pop-up. This time, he married Maine lobsters and Iberico pork and somehow turned it all green using spinach and sayote: the lobsters were hidden in green spinach ravioli while the pork belly was hidden in green sayote noodles. It was an incredible play on textures and flavors, with the creaminess of the ravioli sauce complementing the umami of the lobsters, and the savoriness of the pork tempered by the sayote. Tan is truly constantly improving his craft as a sophisticated chef and definitely a player whose star will shine even brighter this year. 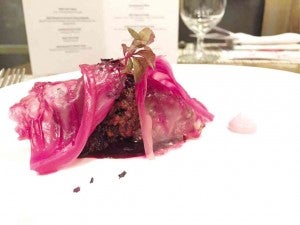 JOSH Boutwood makes a purple salad out of cabbage and beetroot.

Boutwood responded with Black for the second main. “When you look at the city, everything is black. So my immediate thought was, let’s do that (black). It’s interesting,” Boutwood explained of his chosen color.

In fact, I thought he was going with the Narisawa-inspired global trend of serving “charcoal-ized” dishes, which has inspired copies in no less than Mugaritz and Gaggan, but Boutwood simply played with squid ink. He created a paper-thin lavash that served to blanket the hypnotically soft sous vide veal cheeks. This was accented by a gray-hued puree of celery root. Very slick.

The exuberant pastry chef Miko Aspiras, who completed the evening’s trio, was not to be outdone. He served three desserts—Orange, Blue and Brown—all intricate yet easy to appreciate.

Orange was a combination of heirloom carrots, saffron, Mandarin orange, Manuka honey and mascarpone. Again, #itscomplicated. The heirloom carrots were flown in by Aspiras from Sydney, cooked sous vide in honey, spices, and vanilla bean, before being fermented for a week and a half. The result was a candied carrot whose texture remained intact. The carrot was complemented by a Mandarin orange candy, pistachio dacquoise, saffron cream, mascarpone, dulce de leche and buckwheat that was caramelized then crushed. All that to create an abstract creation of varying colors and textures of orange.

Blue was all about the ocean. Aspiras, a little too hard core, put seawater from his last trip to Davao in a bottle—“because it was so blue!”—and used this to make a saltwater taffy. He mixed this with a ganache of burnt white chocolate then painted the taffy with blue cacao butter.

And for his final piece, Brown, Aspiras went back to the ultimate dessert ingredient: chocolate. But with a surprising additional ingredient: soy sauce! He added a bit of brown sugar to the soy sauce then reduced it to a syrup before making it a tiny gel block that would pop in your mouth to complement the sweetness on the rest of the dessert plate. Amid the oohs and ahhs, Aspiras shared his motivation: “I want the Philippines to be the next dessert destination.” 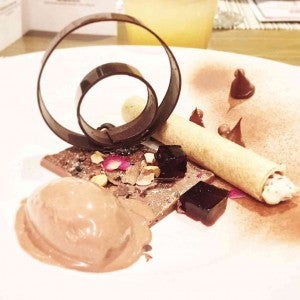 The bar for culinary excellence continues to be raised with these chefs.

The Inquirer’s F&B Report promises to expose more of such phenomenal talent.