Toyota view on Volkswagen scandal: don’t obsess over No. 1 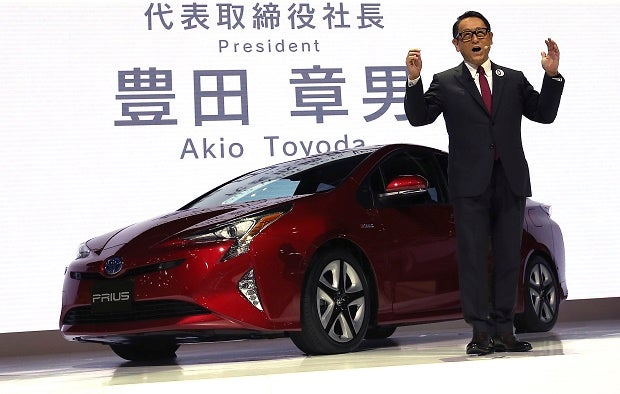 TOKYO, Japan—Toyota’s top executive has offered some advice to German rival Volkswagen as it wrestles with a huge emissions scandal: don’t focus on being number one.

READ: Toyota goes ‘Back to the Future’ with a new version of Marty’s pickup

Akio Toyoda’s comments at the Tokyo Motor show come as the automakers are locked in a neck-and-neck race for the title of world’s biggest automaker this year, with the Japanese giant running slightly ahead.

But Toyota has said it was shifting its goals to quality not quantity after being dented by a series of huge recalls in recent years, including one linked to a deadly accelerator defect.

“Toyota had quality issues in the past, and because of these problems, we have been able to restructure and reform. In that regard, we are strongly committed not to repeat the same mistakes,” Toyoda told reporters at the motor show, which opened Wednesday, when asked about the Volkswagen scandal.

“Toyota is not indifferent to volume, we have a clear target to raise volume, but I want everybody in the world to see our company as the greatest car manufacturer, rather than the biggest.”

The member of Toyota’s founding family added that Volkswagen’s admission it had fitted 11 million diesel vehicles worldwide with sophisticated software to skew emissions tests should not undo progress in making cars cleaner.

“The wrongdoing of one company should not dampen the efforts of other automakers on environmental issues,” Toyoda said.

Volkswagen’s new chief executive apologised for the crisis at the Tokyo show on Wednesday, as the firm booked its first quarterly loss in more than 15 years in the wake of the global pollution-cheating scandal, which also forced it to lower its full-year forecasts.