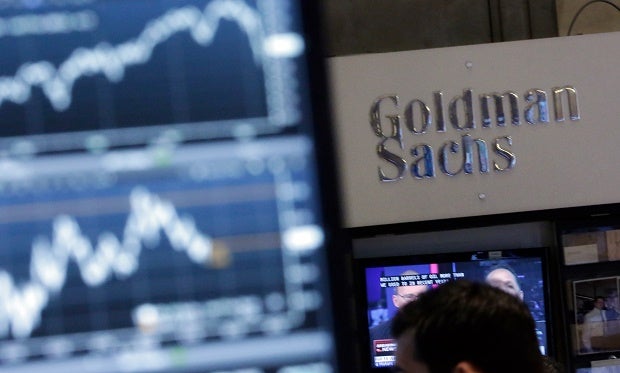 In this Oct. 16, 2014, file photo, a screen at a trading post on the floor of the New York Stock Exchange is juxtaposed with the Goldman Sachs booth. AP Photo

The New York Department of Financial Services said in addition to fining Goldman, it had also won a voluntary three-year abstention from the investment bank on assignments that give it access to sensitive regulatory information.

“This case underscores the critical need for financial institutions to put in place strong controls and policies for employee conflicts screening and the use of confidential regulatory information,” said Acting DFS superintendent Anthony Albanese.

Goldman ignored restrictions on a former Federal Reserve of New York employee hired by the investment bank in July 2014, the DFS Said.

The Goldman hire, Rohit Bansal, who had worked at the New York Fed for seven years, had been advised by the New York Fed’s ethics office that he could not work for Goldman on a bank client he had overseen at the Fed until February 2015.

Bansal gave this written notification from the Fed’s ethics office to Goldman, but Goldman assigned Bansal to work on the bank client anyway, the DFS said.

Bansal also “schemed to steal confidential regulatory and government documents” from the New York Fed in order to help advise the client, the DFS said.

Bansal then forwarded the emails to his work address and to colleagues at Goldman, sometimes pointing out that the documents were highly confidential and should not be distributed.

Goldman employees later used some of the confidential information to advise the bank client on a regulatory examination.

The case underscored the cozy “revolving door” culture in which workers shuffle between regulatory agencies and the companies they oversee. That problem has been seen as particularly acute with Goldman Sachs, which has employed many senior government officials, before and/or after their government service.

The current head of the New York Fed, William Dudley, is a former Goldman executive.