PSEi rises to 7,200 on stimulus hopes 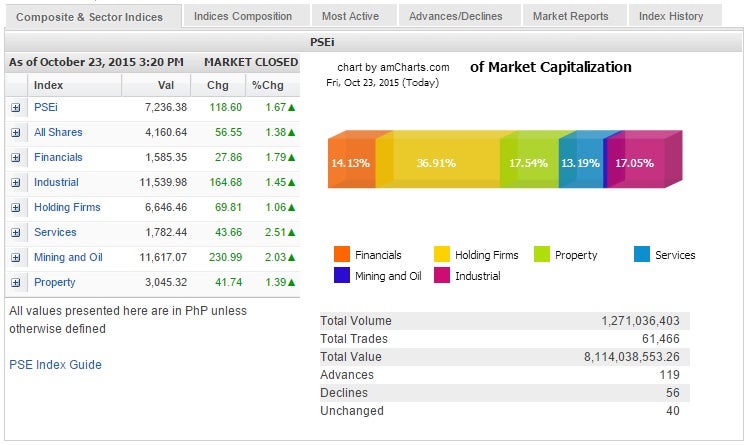 THE LOCAL stock barometer rallied to the 7,200 level on Friday, returning to positive territory for 2015, as European Central Bank (ECB) stimulus hopes perked up global markets.

Stock market across the globe were lifted by the ECB’s statement that it was “open to the full menu of monetary policy” to stoke the euro zone.

At the local market, there were twice as many advancers (119) as there were decliners (56) while 40 stocks were unchanged. Value turnover for the day stood at P8.1 billion.

All counters firmed up led by the services and mining/oil counters which rose by over 2 percent.

ICTSI led the PSEi higher, rising by 5.31 percent. The international port operator’s Mexican unit Contecon Manzanillo S.A. de C.V. (CMSA) has signed a $260-million project finance facility with International Finance Corporation (IFC), Inter-American Development Bank (IADB), Standard Chartered Bank and KfW Ipex Bank. This is for the development and operation of a specialized container terminal at the Port of Manzanillo in Manzanillo, Mexico which will have a capacity of 2.2 million TEUs (20-foot equivalent unit) when completely built.

PLDT, BDO and EDC were all up by over 3 percent. URC, SM Prime, Megaworld and Semirara gained over 2 percent while SMIC, AC, BPI and JG Summit all rose by over 1 percent.

With Friday’s gains, the PSEi has wiped out the 2015 losses earlier incurred following the China-epicentered stock market rout. It has now exceeded PSEi’s closing rate of 7,230.57 in 2014.