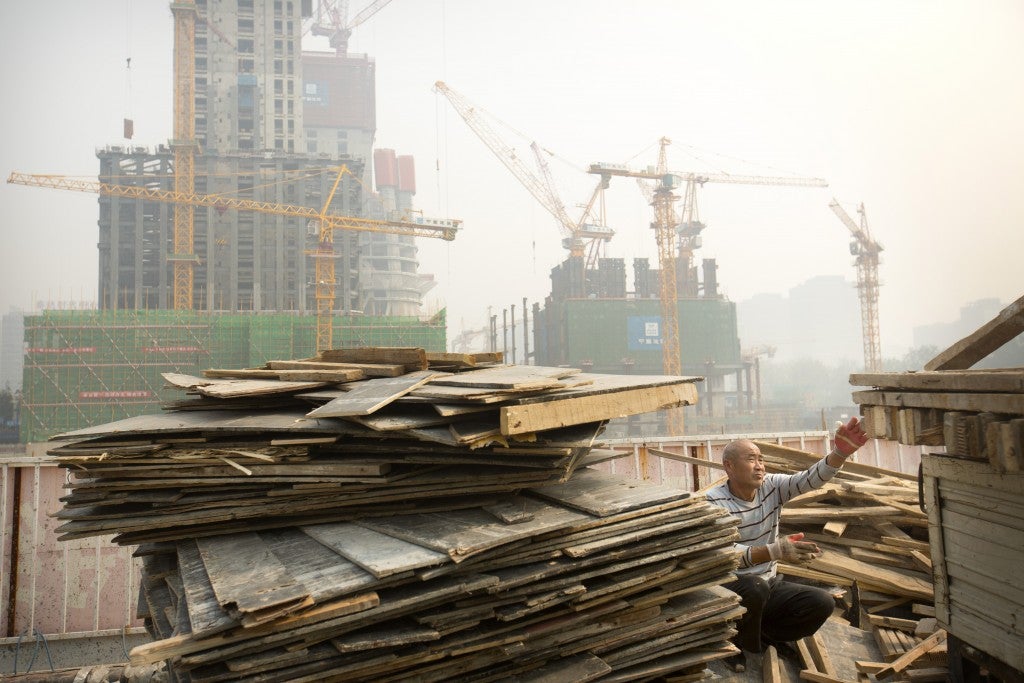 In this Oct. 6, 2015 file photo, a worker tosses boards onto the back of a truck at a construction site in Beijing. China’s economic growth decelerated in the latest quarter but relatively robust spending by Chinese consumers helped to avert a deeper downturn. The world’s second-largest economy grew by 6.9 percent in the three months ended in September, the slowest since early 2009 in the aftermath of the global crisis, data showed Monday, Oct. 19, 2015. That was down from the previous quarter’s 7 percent. (AP Photo/Mark Schiefelbein, File)

BEIJING — China’s economy logged its worst performance since the global financial crisis, official figures showed Monday, with analysts warning it is likely to worsen and the government must do more to avert a sharp slowdown.

Gross domestic product (GDP) in the world’s second-largest economy grew at just 6.9 percent in the third quarter, its slowest rate in six years.

The figures added to fears over the health of the global economy, and some analysts expressed concern they had been manipulated to understate the gravity of the situation.

“We should not be over-optimistic. China’s economic growth will continue to slow down,” he said, adding he estimated GDP would expand 6.4 percent next year.

China’s decades-long boom, fueled by infrastructure investment, exports and debt, made it a key driver of the global economy.

Even though growth has eased in recent years its GDP more than doubled in real terms between 2006 and 2014, according to World Bank figures.

Now it is looking to transition to a “new normal” of slower and more sustainable expansion driven by domestic consumer demand, but the change is proving bumpy and stock exchanges around the world have been pummeled in recent weeks by concerns over its future.

Monday’s figure from the National Bureau of Statistics (NBS) was the worst since the first quarter of 2009, although it was marginally above the median forecast in a poll of analysts by AFP.

It was also the first official confirmation of investors’ fears over GDP since a Chinese stock market slump over the summer followed by a surprise currency devaluation in August.

China has already cut interest rates five times in a year and reduced the amount of cash banks must hold in a bid to boost lending.

In a research note, Louis Kuijs of Oxford Economics anticipated Beijing would take “additional incremental measures… but without going for major stimulus”.

Many China watchers query the accuracy of official numbers, with some suggesting they are manipulated for political reasons.

“Unfortunately, these figures need to be taken with a grain of salt as official GDP growth appears to have become a poor gauge of the performance of China’s economy,” Capital Economics China economist Julian Evans-Pritchard said in a research report.

The firm’s own measures pointed to growth of only “around 4.5 percent” in the third quarter, it said.

GDP expanded 7.3 percent last year, the slowest pace since 1990, and at 7.0 percent in each of the first two quarters of this year.

The government targets “around seven percent” for 2015.

The NBS in a statement described third-quarter growth as a “slight slowdown” and said the economy was still running within a “proper range”.

But it added: “We must be aware that internal and external conditions are complicated, and downward pressure for economic development still exists.”

NBS spokesman Sheng Laiyun blamed a weak recovery in the world economy and expectations of a US interest rate rise for China’s woes, as well as domestic overcapacity in industries ranging from steel to concrete.

China’s growth slowdown has sent prices of commodities ranging from oil to copper to multi-year lows, and led the US Federal Reserve to delay a widely expected increase in borrowing costs.

Analysts attributed the July-September decline to the floundering property market and flagging exports, although retail sales offered some consolation.

They increased 10.9 percent in September, marginally ahead of the previous month.

Fixed-asset investment expanded 10.3 percent on-year in the January-September period — lower than a median projection for a 10.8 percent increase, according to a survey by Bloomberg News.

China’s stock market took the figures in its stride on expectations of more stimulus. The benchmark Shanghai stock index closed down 0.14 percent.