VISTA Land and Lifescapes Inc. has gone beyond just building homes to include developing retail outlets, schools and hospitals

The head of the Vista Land and Lifescapes Inc. property empire says he has learned to curb his enthusiasm, even when the economy is roaring along.

The painful lessons of the 1997 East Asian financial crisis are still fresh in his mind.

The former senator gave the Inquirer an interview during last week’s 2015 Forbes Global CEO Conference and was unusually candid and introspective about his ups and downs over the past few decades—ups and downs that have seen him become one of the country’s richest businessmen in the 1990s, on the brink of bankruptcy in the following decade, and back up among the country’s wealthiest today.

Indeed, Villar’s Camella Homes dominated the real estate scene in the 1990s with its affordable housing communities sprouting all over the country.

But the sharp peso devaluation in the late 1990s revealed a hidden weakness: The property giant was built on short-term dollar loans.

The drop in the peso’s value doubled the company’s debt load overnight and the accompanying spike in interest rates made the company unable to service its debt.

The result was a virtual bankruptcy, with creditors foreclosing on its assets left and right.

Villar says he has since learned to be more conservative.

“The [financial] ratios are important,” he tells the Inquirer. “You have to watch your ratios.”

And he is the first to admit that he was almost done in by his youthful enthusiasm for rapid growth decades ago.

“You have to be careful,” he adds, “Sometimes, you enjoy yourself too much, like in land banking for example. It can be a trap. You get to buy a lot of cheap properties. You keep on land banking. Then before you know it, you’re already loaded with too much debt. When the downturn comes, you get hit.” 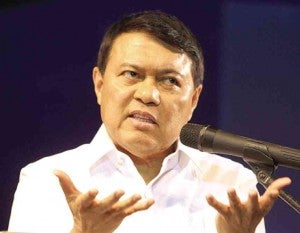 VILLAR advises entrepreneurs to be liquid at all times.

With his thumb supporting his chin and his forefinger rubbing his temple, Villar pauses and says: “Now, I’m more cautious.”

He is particularly cautious about taking on debt—the very thing that almost wiped out his business empire in the late 1990s and early 2000s.

When speaking about debt, his volume goes down a notch and his words become more measured. He chooses his words more deliberately.

And he reminds us that short-term liabilities—though they are temptingly easy to take on —can be silent killers when your company is struggling on the ropes.

“You should stay away from one-year-to-pay debts. Stay liquid and maintain a healthy debt-to-equity ratio,” he says, then adds: “There are standards [to follow]. But you tend to neglect them when you are a young entrepreneur.”

Then another reflective pause: “When you’re new, you forget these things. Then you begin to blame other people.”

Today, Villar—whose net worth is valued by Forbes at $1.57 billion—is no longer new to the wise ways of business. Not by a long shot.

But the businessman, reinvigorated by the success of his business endeavors in recent years, says it feels like he’s “only just begun.”

His publicly listed flagship firm, Vista Land and Lifescapes Inc., has a market capitalization of P45 billion and is sitting on undeveloped real estate stock (its so-called land bank) of at least 2,500 hectares nationwide —land that he says will be developed not just into housing developments, but fully functioning communities with commercial developments like shopping malls, schools and hospitals.

“We are way past just the housing business now,” he says, his tone instantly becoming livelier and more excited when talking about his current activities and prospects.

“We have condominiums, malls and retailing. My son is into the water industry. We have lots of other business like schools and we’re going into hospitals. I’m growing this business,” he says.

He declined to reveal further details about his push into healthcare, saying only that he’s putting up a hospital “somewhere along Daang Hari,” referring to the road connecting Muntinlupa City to Bacoor, Cavite—a route that bisects many of his most valuable landholdings.

“For me, my platforms there are the communities,” he says, explaining that his new business philosophy is no longer about just selling housing units, but making sure that these communities thrive by surrounding them with the facilities they need to build a strong and healthy environment.

Indeed, it is a far cry from the old business model where a real estate developer would sell you a home, then leave you to your own devices.

“It’s integration. And at the same time, you improve your service to your clients,” Villar explains.

So given his business empire’s near-death experience several years ago, is the businessman sensing any chinks in the armor of the rapidly growing Philippine economy?

Is he worried about any surprises around the corner?

“I’m very optimistic,” he says. “In fact, the real estate industry and real estate companies are a lot stronger now.”

“I don’t see [a repeat of 1997] because we’re all very alert,” Villar adds. “In fact, even the central bank is a bit paranoid (by imposing many restrictions on real estate lending). Sometimes, we feel that they’re too paranoid, but at the end of the day, I guess that’s ok, too.”

“They compel the banks to be strict, and because the banks are strict, you are compelled to be conservative,” he says, describing how fear of a repeat of 1997 has gripped the real estate business today.

Villar’s business concerns today can be found in 92 cities and municipalities, including many of the smaller ones where larger real estate developers fear to enter—something that doesn’t bother him, thanks to strong ties with local government officials developed during his many years as a politician.

Overall, Villar says he is optimistic about the country’s prospects regardless of who ends up running it in 2016 and beyond.

Optimism and conservatism —a good combination.