Pacific trade agreement could cause rift in political camps 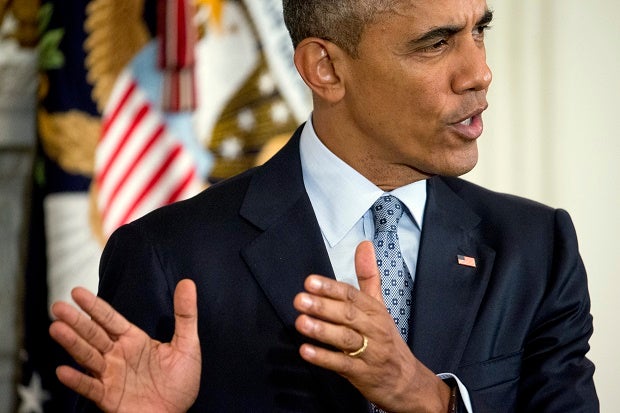 In this Oct. 2, 2015, file photo, President Barack Obama speaks during a news conference in the State Dining Room of the White House in Washington. An ambitious trade pact involving the United States and 11 other nations is a major victory for Obama but could create a rift among Democrats and cause friction with a key base of their political support. AP

WASHINGTON — An ambitious trade pact involving the United States and 11 other nations is a major victory for President Barack Obama but has the potential to create a rift among Democrats and cause friction with a key base of their political support, the nation’s labor unions.

It will be weeks before the full scope of the agreement announced Monday is known, but several labor groups are worried that it will result in American jobs being sent to counties with lower wages and less stringent labor and environmental standards. A congressional vote on the pact — the Trans-Pacific Partnership —is not expected to occur until well into next year, providing the unions with the chance to maximize leverage with lawmakers coveting their support in a national election year.

The president has to wait 90 days before signing the pact, and only then will Congress begin the process of voting on it. Approval of the deal would give Obama a legacy-defining victory. He went to work immediately on Monday in selling the agreement and will visit the Agriculture Department on Tuesday to tout its benefits for farmers.

“When more than 95 percent of our potential customers live outside our borders, we can’t let countries like China write the rules of the global economy,” Obama said in a statement released Monday. “We should write those rules, opening new markets to American products while setting high standards for protecting workers and preserving our environment.

To achieve a victory, Obama will need help from Republicans and will need to overcome doubts from a key Democratic constituency. In the hours after the trade deal was announced, some union leaders made clear that a candidate’s stance on the Trans-Pacific Partnership will serve as a critical test in determining whether they can expect support. While unions have lost political clout as their numbers have declined, their political action committees donated more than $60 million to political campaigns during the 2012 elections, with about 90 percent of that money going toward Democratic candidates, according to the Center for Responsive Politics.

Chris Shelton, the president of the Communications Workers of America, whose members include customer service representatives and computer technicians, said the union will “hold accountable those members of Congress who support this giveaway to the 1 percent,” referring to the wealthiest segment of society.

Tom Buffenbarger, president of the International Association of Machinists and Aerospace Workers, said, “This is a very, very serious and dangerous proposal, and those who would see fit to simply fall for another trade deal, thinking it is good for America, they will incur our dedicated effort to unseat them.”

Buffenbarger said his comments applied to the congressional races. In the presidential race, his union has already endorsed Hillary Rodham Clinton. It’s unclear where Clinton will come down on the trade agreement, but Buffenbarger said the endorsement stands.

“Wall Street and big corporations just won a big victory. Now it’s on us to stop the #TPP from becoming law,” Sanders tweeted.

Another Democratic candidate, former Maryland Gov. Martin O’Malley has been highly critical of the trade pact in recent months.

The TPP is designed to encourage trade between the United States, Australia, Brunei, Canada, Chile, Japan, Malaysia, Mexico, New Zealand, Peru, Singapore and Vietnam. The pact would reduce tariffs in the participating nations in a bid to open markets.

White House spokesman Josh Earnest said the pact is essentially an agreement to cut an estimated 18,000 taxes, or tariffs. For example, he said US poultry is taxed in some cases as much as 40 percent and soybeans as much as 35 percent. Those tariffs would be slashed if not eliminated, Earnest said.

“American workers should be skeptical of the specifics of this new trade agreement. Past trade deals like NAFTA have hollowed out America’s manufacturing base and shipped thousands of American jobs overseas,” said Democratic Rep. Dan Kildee of Michigan. The North American Free Trade Agreement was signed by the United States, Canada and Mexico.

“Those are two countries where you have a large, and growing, middle class,” Earnest said. “That makes them good markets for selling automobiles.”