Mariano Que on living life to the full | Inquirer Business

Mariano Que on living life to the full 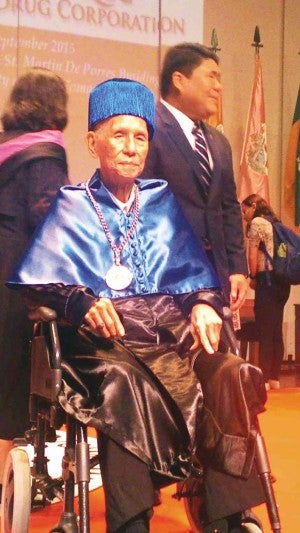 “GOD ALONE can satisfy us. God can bring us real happiness.”

Mariano Que, the 95-year-old founder of Mercury Drug Corp., said this in his heartfelt speech last week during the conferment of his honorary degree at the University of Sto. Tomas College of Medicine Auditorium.

UST bestowed upon him a Doctor of Humanities degree for being the pioneering spirit behind the pharmaceutical retail industry in the Philippines and his continued advocacy of providing affordable medicine and assistance to needy Filipinos.

“I lived my life doing what I think was needed to be done,” he said.

In his wheelchair and with a barely audible voice because of his age, Que thanked the UST Faculty for the honor and his wife, who he said gave up teaching to make his dream come true.

He also thanked God for his health and long life.

“May I prove myself worthy of you,” he said at the end of his speech.

Que, who rarely appears in public, was joined by his family, some employees of Mercury Drug and faculty and students of UST.

Que began his corporate journey in 1945.

Filipinos, who had just suffered through a devastating war, had very limited access to medicine at that time.

Que, with his P100, bought a bottle of the wonder drug Sulfathiazole, and sold it piece by piece using a pushcart on the streets of Sta. Cruz.

With his savings, he later put up the first Mercury drugstore on Bambang in Manila.

Under Que’s leadership, Mercury Drug initiated many firsts in Philippine pharmaceutical services, including the use of a central computerized and temperature-controlled warehouse and refrigerators for medicine preservation.

Mercury Drug was also the first to introduce a 24-hour service and pharmacy counseling.

Que also set up a foundation that caters to the healthcare needs of Filipinos.

An advocate of education, Que’s foundation launched the “Pharmacy Scholarship Program” that grants full scholarship to Pharmacy students enrolled in member-schools of the Philippine Association of Colleges of Pharmacy; and the “Gawad Talino” program that recognizes high school students’ excellence in Mathematics and Science.

Que is also one of the founding members of the Philippine Business for Social Progress. He pledged to set aside a percentage of Mercury Drug’s income to pursue poverty reduction programs.

In 2012, Que was recognized by the Philippine Retailers Association as the Father of Philippine Health and Wellness Retailing. He also received various awards, such as the President’s Award: Plaque of Merit for being the most prestigious drugs manufacturer and distinguished civic leader in 1973; and the Award of Distinction from the Philippine Chamber of Health and Pharmaceutical and Nonpharmaceutical industry in 1986.

With his honorary degree, Que became one of UST’s 76 recipients of honoris causa.