“The global mobilization behind the Millennium Development Goals has produced the most successful anti-poverty movement in history. The landmark commitment entered into by world leaders in the year 2000—to “spare no effort to free our fellow men, women and children from the abject and dehumanizing conditions of extreme poverty”—was translated into an inspiring framework of eight goals and, then, into wide-ranging practical steps that have enabled people across the world to improve their lives and their future prospects. The MDGs helped to lift more than one billion people out of extreme poverty, to make inroads against hunger, to enable more girls to attend school than ever before and to protect our planet.”

The MDG report claims that:

How did the Philippines do in Southeast Asia in particular and Asia in general?

The country has failed miserably in halving extreme poverty. Its rate of poverty reduction is the lowest among eight countries.

The performers were: Vietnam, Pakistan, Nepal, Cambodia and Indonesia, in that order.

India and Bangladesh also failed but with better performance than the Philippines. Note: China, Malaysia, Sri Lanka and Thailand were excluded as they have achieved low extreme poverty rates. 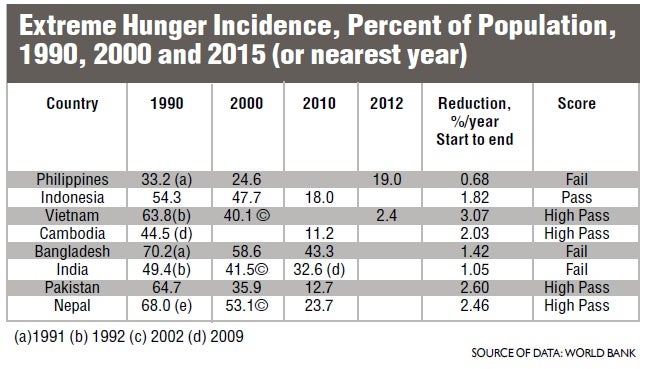 What went wrong for the Philippines?

It is time to again revisit rural poverty, which is near 40 percent today, the highest among peers in the Association of Southeast Asian Nations.

Earlier research shows that the Philippines scored very low in farm productivity and agriculture exports in the Asean.

The next president must have in-depth strategic assessment of the causes of poverty.

(This article reflects the personal opinion of the author and does not reflect the official stand of the Management Association of the Philippines. The author is the Vice Chair of the M.A.P. Agribusiness and Countryside Development Committee, and the Executive Director of the Center for Food and AgriBusiness of the University of Asia & the Pacific. Feedback at <[email protected]> and < [email protected]>. For previous articles, please visit <map.org.ph>)