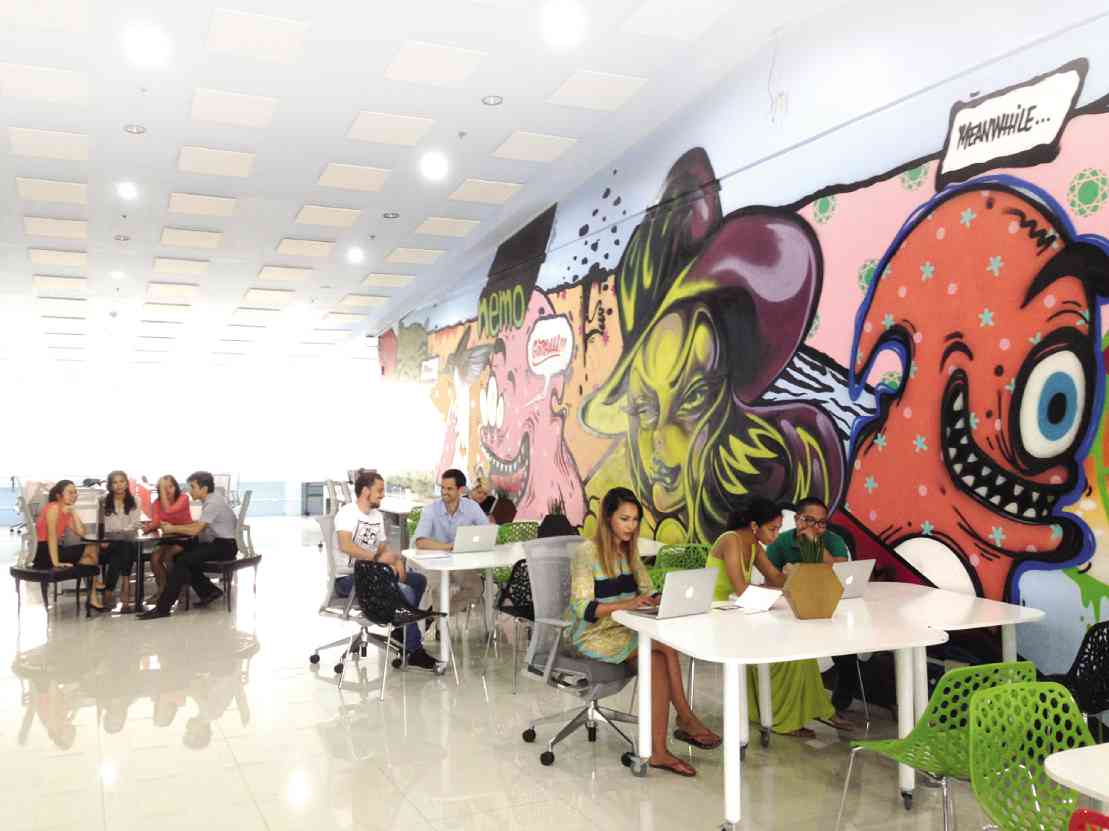 CO-WORKING means collaborative working, which Impact Hub seeks to bring to the fore.

That one bright idea that may turn into a multi-million-peso enterprise no longer just pops up in a 3-square-meter space with a sleeping law student nearby.

It may just emerge from Impact Hub Manila, a “co-working” space on Chino Roces Avenue Extension in Makati, where some entrepreneurs and innovators share space and feed on each others’ ideas, creativity and goals.

Think artists’ colonies, or a newsroom—only that these people are their own bosses, ready to mingle with and seek guidance from others.

Impact Hub Manila is a 320-square-meter space at the fifth floor of Green Sun Hotel.

Unlike the constricting space of coffee shops and offices, the co-working space is a school gym made cooler by graffiti on the wall, movable Dedon and Haworth furniture, and an 8-meter bar that serves free coffee all day (and sometimes, booze).

Entry to the hub depends on the needs of the individual. For P3,280, for example, the individual can already spend 25 hours there, including unlimited discussions and assistance from experts and other members.

“It’s nothing. If you calculate it, it’s like P130 per hour, which is normally what you spend if you go to a coffee shop … We are very flexible in terms of memberships,” Kuster says.

The first Impact Hub opened in London in 2005. Eight years after, the co-working movement has grown to 70 hubs around the world. The Philippine hub opened only in June.

Kuster was an original “Huber” in Zurich alongside boyfriend, Mathias Jaeggi. 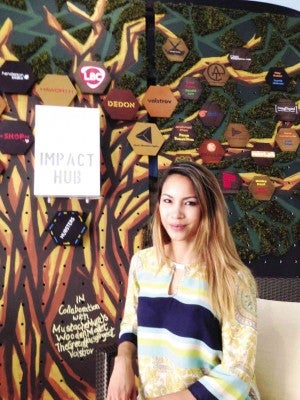 She says it was Jaeggi who introduced her to the co-founder of the Zurich branch “and since it is so much my passion and my skills, we were like, ‘oh yeah it might be needed here in the Philippines.’”

Kuster, half-Filipino and half-Swiss, knew it was only a matter of time before Filipinos fully embrace the concept.

She has always known that Filipinos have rich ideas just waiting to emerge.

The graduate of International Management at the University of Western Switzerland was in the Philippines in 2009 when tropical storm Ondoy dumped torrential rains in Manila in just a day.

“Everything was flooded. We were in water for four days, it was just horrible. I lived in Malate and we really got flooded. And the interesting thing was, people were so innovative in solving these problems. In a few hours, they created boats. Back then, I was so proud of the entrepreneurial and innovative spirit of the Filipinos… It was very community-driven. They smile very fast. They’re very optimistic,” Kuster says.

It helped that the 29-year-old also has an innovative spirit—and was exposed to a variety of experiences, including beauty pageants.

Kuster represented Switzerland in the Miss Earth pageant, a contest that not only celebrates beauty but also what one can do to help the environment.

“I’m very much exposed to the Miss Earth Switzerland title on sustainability and sociability … But more than that, I was always business-minded,” she says.

Kuster and Jaeggi teamed up with Ces Rondario, another affiliate of Impact Hub.

Impact Hub today provides not only shared space in the Philippines, but also a shared commitment to making the one big idea work.

That idea is not all about success. In Impact Hub, failures are discussed, too.

In sharing those failures, Kuster says Hubers do away with the lessons learned.

“They don’t need to say what things they learned because here in Impact Hub, we really want to cut small talk. We want to be honest with each other, we don’t just want to say the meeting was fine … If you are doing business, you should not be scared about sharing those failures,” she says.

A guy from Novu once shared that he and his family had a successful business. But the father died, and the enterprise went down from there. Another guy from Raket PH said he had worked on the one big idea all by his lonesome. The business failed, of course, because he forgot to talk to his customers.

Fortunately, stories of success trump those of failure, Kuster says.

In the short time that Impact Hub Manila has been in business, Kuster says the co-working space was able to bring together the founders of Bambike, which makes bamboo bicycles, and the makers of bamboo toothbrush.

“Linking these two enterprises together—it is already a small success story,” she says.

The search for success is also why Impact Hub Manila is soon launching an incubation program that seeks to provide mentoring and financial backing to the winner.

In partnership with LBC, Impact Hub will search for the “greatest innovation in mobility.”

“It can be an app, it can be a vehicle, it can be whatever super futuristic, it can be a new urban development… That’s the beauty of it, we don’t know yet what we will find,” she says.

She cites one idea that was incubated in Impact Hub Zurich and remains a “scale-able” enterprise to this day.

The UrbanFarmers developed a farming system for rooftops of urban Zurich.

The idea, which garnered support for its impact on the environment, eventually became a million-dollar business.

What makes an idea successful, anyway?

Kuster says, “We measure it more like how many jobs are created, how many start-ups are built.”

She says Filipinos should not worry about their ideas being copied by other people in the co-working space.

“That’s always a funny question, which I hear here, more than in any countries. I don’t know why people here are more protective. I don’t believe you need to be scared of people stealing your idea,” she says.

She says an idea becomes an enterprise if there is execution.

“I think you need to be more scared about not executing than with somebody stealing your idea,” she says.

She says execution is the goal of networking in a shared space.

“If you are scared and you really need to be isolated and don’t want to share your idea at all, then you might not really be at the right place here,” she says.