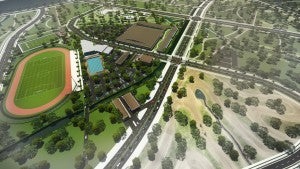 Vermosa is ALI’s fourth largest estate in terms of geographic footprint after NUVALI in Laguna, Alviera in Porac, Pampanga and Makati central business district, ALI president Bernard Vincent Dy said in a press briefing on Wednesday. It is also the first to focus on Filipinos’ increasingly active and healthy lifestyle.

Upon full development in the next 12 to 15 years, Vermosa will have 3.5 million square meters of built-up area with at least 30,000 residents or 6,000 households and a daytime population of around 500,000 workers.

Timely launched soon after the opening of the new Muntinlupa-Cavite Expressway (MCx) which has cut down travel time to and from Makati at peak traffic hours by 30 percent to 55 minutes, the new estate is also seen to benefit from the future opening of the Cavite-Laguna Expressway (CALAX).

The estate straddles the cities of Dasmarinas and Imus and is near Daang Hari road and Aguinaldo highway.

The project is envisioned to “redefine” suburban living for the next generation with its pedestrian-focused environment and first-of-its-kind athletic amenities. A total of 165-hectares or 24 percent of the entire development will be devoted to parks and gardens. It will also feature a 14-kilometer greenway and a landscaped promenade stretching north to south of the project that encourages people to walk, run and explore their neighborhood or take a bike to work.

“Building large scale mixed-use developments that are strategically located in the country’s emerging growth centers will continue to be our focus. Our residential brands continue to introduce new offerings within our estates,” Dy said.

To reduce reliance on private vehicles to move around, the master-plan ensures that neighborhood retail centers are accessible within a 10 minute walk or bike ride from any residential development within the project.

By land area, about 124 hectares of Vermosa will be devoted to a future central business district that will host various business and commercial establishments, hotels, shopping, entertainment, dining as well as medium to high density residential developments. It will also have institutional users such as schools.

To focus on Filipinos’ increasingly active and healthy lifestyle with its special feature, the estate will have the Vermosa Sports & Lifestyle Complex (VSLC), which will have an Olympic-size pool, 400-meter track and field and the most advanced and complete sports science laboratory in the country. VSLC will also have a motocross track and the first purpose-built mountain bike skills track in the Philippines.

Furthermore, this estate will have the VLSC sports science laboratory, the first of its kind in the country and will primarily cater to the growing triathlon market and related sports such as marathon, swimming and cycling.

The sports science lab, targeted to be opened in the fourth quarter of 2016, will also offer facilities to athletes and fitness enthusiasts to raise the level of their performance using a scientific and technology-based approach. At present, Filipino triathlons have to go overseas to avail of such services, said Meean Dy, ALI’s group head for strategic landbank management.

Completing Vermosa’s health and lifestyle amenities will be a 10,000-square-meter sports-themed retail that will feature various athletic and sport shops as well as array of healthy dining options.

All these amenities will be managed by industry professionals and will be open to the public by the end of next year. Dy said the Ayala group – which now had mass transportation as part of its business – would work to develop the entry of public transportation into the estate and establish a mass transit terminal in the future.

The vast landbank now branded as “Vermosa” was acquired by ALI two to three years ago from another property developer.