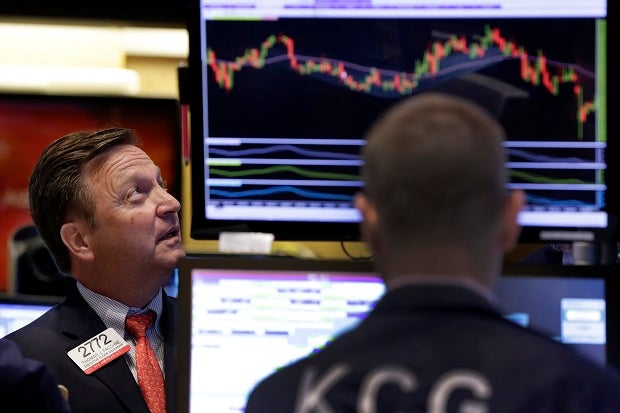 Disappointing manufacturing data from the United States and China was one big factor contributing to the market malaise. A key U.S manufacturing index released Tuesday for August slid to its lowest level since May 2013 on the stronger dollar and slowing growth in foreign markets. Earlier in the day, an official Chinese survey of factory purchasing managers slumped to its lowest level in three years.

“Investor hopes that share market volatility had been put behind them have proven short-lived,” Ric Spooner of CMC Markets wrote in a commentary. “Market action itself has again become the dominant concern for investors,” he said. Wall Street’s steep drop overnight reinforced investor skittishness that’s adding to selling pressure, he said.

The release of monthly US jobs data on Friday will also provide further cues for investors while uncertainty over whether Federal Reserve officials, who meet Sept. 16-17, will raise rates continues to overshadow markets. In China, markets may be more volatile on Wednesday, which is the last day of trading before a two-day holiday to celebrate Japan’s defeat in World War II. Some analysts think Beijing will try to intervene in the markets to prop up share prices heading into the holiday.

International Monetary Fund Managing Director Christine Lagarde said in a speech in Indonesia that global economic growth is likely to be weaker than expected. Asia is still expected to lead global growth, but the pace is slowing and could sag further because of recent financial market volatility. “Overall, we expect global growth to remain moderate and likely weaker than we anticipated in July,” Lagarde said. That reflects “weaker-than-expected recovery in advanced economies and a further slowdown in emerging economies, especially Latin America,” she said.

Benchmark US crude oil fell $1.20 to $44.22 a barrel in electronic trading on the New York Mercantile Exchange. The contract closed at $45.41 a barrel on Tuesday. Brent Crude, a benchmark for international oils used by many US refineries, fell 93 cents to $48.63 in London.