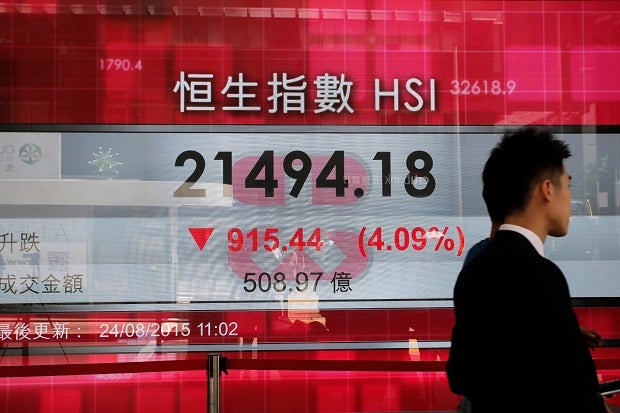 A man walks past an electronic board showing the Hong Kong share index outside a local bank in Hong Kong, Monday, August 24, 2015. Stocks got a dismal start to the week in Asia, with China’s main index losing up to 8.6 percent Monday as investors shaken by the sell-off last week on Wall Street unloaded shares in practically every sector. AP

Oil prices fell after slipping below $40 a barrel for the first time in six years, as weak Chinese manufacturing data deepened worries about the slowdown in the world’s number two economy.

BACKSTORY: US oil falls below $40; lowest in six years

“Today has all the hallmarks of being one of the worst trading days of the past five years,” said Evan Lucas at IG Markets.

“The reaction from Asia today will be symptomatic of the current investor sentiment and belief that a hard landing (in China) is inevitable.”

The losses early Monday followed a steep fall in US and European stocks on Friday, while several commodities plunged to multi-year lows and emerging market currencies took a battering.

China on Sunday said it would allow its huge state pension fund to buy equities, after a package of measures unleashed by Beijing last month to shore up equities failed to stem the rout.

The fund, which had some 3.5 trillion yuan ($550 billion) in net assets at the end of 2014, will be able to invest up to 30 percent in equities, according to state media.

But analysts said the move would not be enough to stem the losses in Chinese shares at a time when global market sentiment was bleak.

“The market is going to drop further. It’s normal as the markets across the whole world are falling,” Qian Qimin, an analyst from Shenwan Hongyuan, told AFP.

“The entry of the pension fund will take a long time to happen. And valuations are still not cheap.”

Oil prices also fell, after breaking below $40 barrel for the first time in six years Friday on concerns about waning demand in China, the world’s top energy importer.

Data showing the number of US drilling rigs rose last week, despite the slump in prices, added to concerns a global supply glut will last for years.

Jitters over China and the global economy saw traders drop the dollar and move into the yen — a safe haven in times of turmoil and uncertainty — while the currencies of Malaysia, Thailand and South Korea all hit fresh multi-year lows.