Gaggan shares his genius with the culinary world

IF YOU commute to his restaurant at night, you might miss it because of the obscure black sign. Where is it?!? Maricris Encarnacion asked exasperatedly as we walked a block down Soi Langsuan in heels to meet our reservation.

Once you make it, though, all frustration melts away. You become the giddy kid in a candy store, ready to partake of a revered menu. And even more excited once you see that the celebrated chef is actually in the kitchen, preparing your meal for you.

“I’m here 260 days a year,” Chef Gaggan Anand confessed, when we had settled down at Gaggan, just recently ranked Top 10 in the world and No. 1 in Asia, explaining that in spite of the many accolades he has been receiving lately, he still recognizes that as a chef, his work is in the kitchen.

“Can we have a picture with the chef?” Chef Myrna Segismundo asked A, our enchanting and efficient server as we dove into our third appetizer. His smiley face turned serious. “No,” he said gently but firmly. “Maybe after dinner.”

In fact, Gaggan pops in at various times throughout dinner. He is charming and chatty, sometimes sharing the inspiration behind a dish. But his presence comes in bursts, and he quickly disappears back into the kitchen. It is his graceful way of personally checking in on the customer experience and making sure that you understand his art.

And it is art. Dinner begins with a litany of amuse bouches where the chef exposes his personality and tells you that he wants you to have fun, while displaying the techniques he acquired as a former intern of the legendary El Bulli.

Shikanjvi, a traditional lemonade of North India and Pakistan, is served in a test tube and accented with rose pellets. Yogurt is served as a silky ball and just pops in your mouth. Spiced nuts come wrapped in edible plastic, to take you to the streets of India—and it really feels like you are munching on chichiria you bought from a street vendor. White chocolate arrives and you think it will be sweet but inside is a burst of chili.

The art continues to the main dishes. While Yoshihiro Narisawa serves Wagyu beef coated in vegetable ash and Andoni Aduriz serves roast veal and thyme “branches” also covered in ash, Gaggan serves “Charcoal”. It literally looks like a piece of charcoal and the server makes you guess what is inside. On the plate, designed by Gaggan as well, is a clue: fish bones. And true enough, Gaggan tells us later that inside the charcoal is fish.

Another pretty piece is the Magic Mushroom, which comes in the shape of a log. Underneath is edible “soil” and the plate is accented with greens to evidence a “garden.” At the very least, this makes for good conversation. “Edible soil? Is this his response to Narisawa’s bread of the forest? How tasty are these mushrooms?” But it is really quite the masterpiece; as appealing in the mouth, in terms of both taste and texture (loved the crunchy bark) as it is for the eyes. 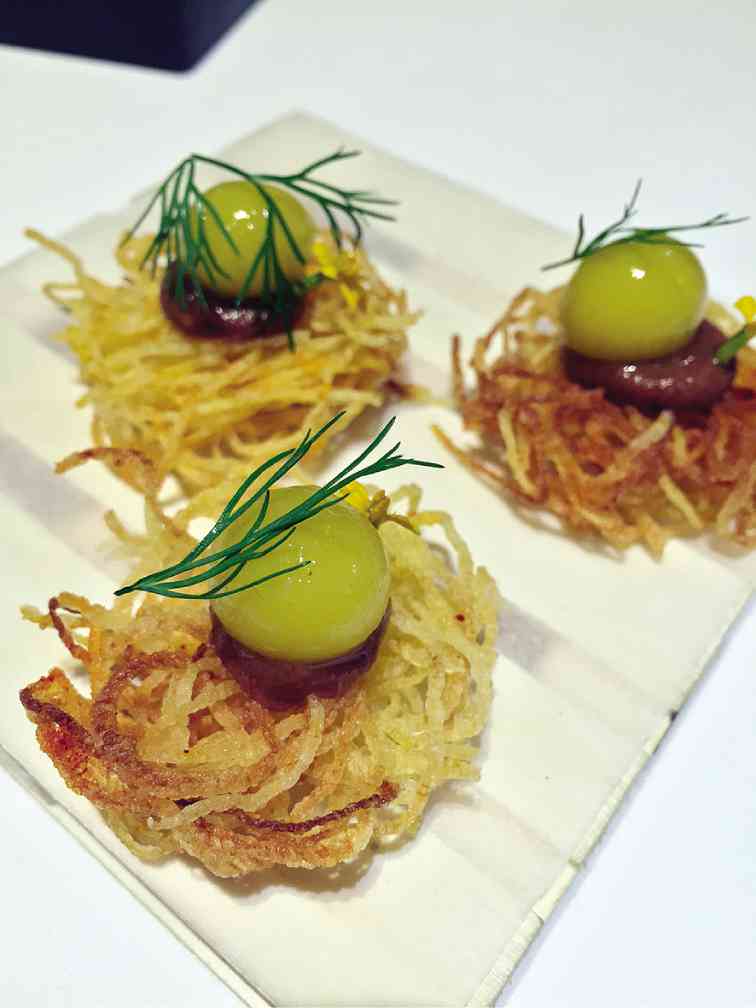 What is comforting about Gaggan, aside from his affordable tasting menu (around P4,000 compared to Restaurant Andre’s P12,000 and Tasting Room’s and Vask’s over P5,000), is that each dish, while visually avante garde, brings you home to something familiar.

The bird’s nest reminded someone in our table of Pik-Nik; samosas were served with Indian accents; even the fish inside the charcoal ball tasted familiar. This is what distinguishes Gaggan from other avante garde chefs who forget that while the game now involves visual deceptions and gimmickry, at the end of the day, the guest wants something that he can actually eat, not just something that might be better placed in a museum and not in your mouth. 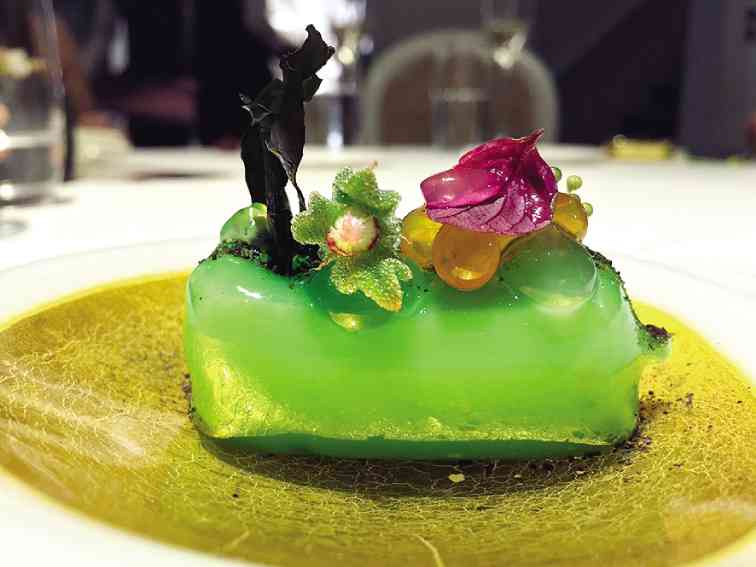 Aside from anchoring his creations on something familiar, Gaggan also indulges the universal appreciation for comfort food: he serves curry and rice as his piece de resistance. (Although you may be too full to appreciate the rice at this point because before the curry, you will have a serving of lamb, goat’s brain, sous vide pork, and scallops—all excellently executed.) “It’s because we still go back to our mother’s cooking,” he explained.

This reminds me of what he said during our interview with him before he won the title of Asia’s Best Restaurant at the last Asia’s Best Restaurant awards in Singapore. “I think the trend will shift back to comfort food … because people are tired of stories,” he said, laughing, taking a jab at the fact that with modern gastronomy menus, each dish must come with a “story”, an explanation of what the art on the plate means.

Aside from this tribute to home cooking, in his humility, Gaggan also makes sure to emphasize his Indian roots. While his technique is evidently Adria, with a keen eye on what is trending in the kitchens of Narisawa, Aduriz and other modern-day greats, the soul of his cooking is clearly Indian. He aims to uplift Indian cuisine while communicating to the world, through his art, what it’s all about. The man has essentially deconstructed familiar Indian food and then presents it in the language of the world’s best chefs and 21st century gourmets.

“I’m not an expert on Thai food. For Thai food, you go David Thompson,” said the recipient of the No. 1 title for the 2015 Asia’s Best Restaurant Awards. “I am Indian and I serve Indian cuisine,” he added.

Indeed his mother and motherland can be proud.