Citigroup results jump after a big legal charge a year ago 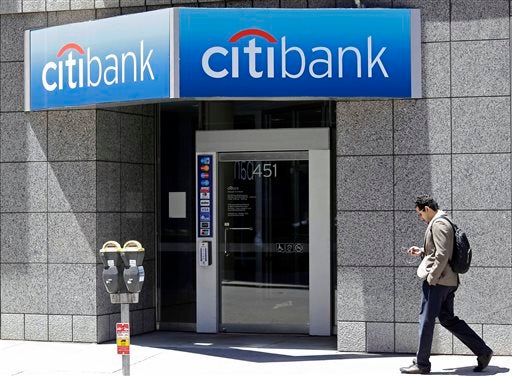 In this photo taken, Wednesday, July 9, 2014, a man walks past a branch of Citibank in the Financial District in San Francisco. Citigroup reports second-quarter results on Thursday, July 16, 2015. AP

NEW YORK— Citigroup’s profits rebounded in the second quarter from the same period a year ago, when the bank recorded a huge legal settlement with regulators.

The bank said Thursday that it earned $4.57 billion after payments to preferred shareholders as the bank cut expenses across the board, sharply higher than the $102 million it earned a year earlier.

Citi’s second-quarter profits were basically erased last year after the bank recorded $3.8 billion in costs related to settling charges over its role in the housing bubble and subsequent financial crisis.

On a per-share basis, Citi earned $1.51, compared with 3 cents a year earlier. Adjusted earnings were $1.45 a share, due to a six-cent charge tied to value of Citi’s debt holdings, but that still beat the $1.35 per share that financial analysts were expecting.

Citi’s global consumer banking division, which includes Citi’s U.S. retail banking chain, credit cards, as well as its consumer banking business in Latin America and Asia, had net income of $1.63 billion. That’s up 4 percent from a year ago, helped by a drop in expenses.

Like Bank of America and JPMorgan Chase, Citi has been looking to cut expenses in its consumer banking division through branch closures, layoffs and other measures. The bank had 15 percent fewer branches than it did a year ago, Citi said.

Citi Holdings, the bank’s so-called “bad bank” that holds the bad mortgages and other toxic securities left over from the financial crisis, made a modest profit in the quarter of $157 million compared with the $3.4 billion loss the business had a year ago.

Citi has been winding down and selling off assets in Citi Holdings for several years. Since last year, the division has been making small profits each quarter.

Net revenue at the bank totaled $19.47 billion, compared with $19.43 billion in the same period a year earlier.