The upstart company Xeleb Inc., the first new subsidiary set up by Xurpas since going public in end-2014, is 67-percent owned by Xurpas while the rest is owned by Curtis and three other celebrities: actress/host and ramp model Isabelle Daza, broadcaster Kim Atienza and celebrity chef/entrepreneur Erwan Heussaff.

“By giving equity, we look at the celebrities as our partners. In a technology start-up, equity is really the most compelling currency that you can give to everyone. That’s such a strong carrot,” Xurpas chief executive officer Nix Nolledo said in an interview on Wednesday.

Xeleb seeks to put together two very successful megatrends, Nolledo said, citing the rise of celebrities as a mainstream media force and the boom in casual gaming globally.

“Celebrities are crossing over to the digital space,” Nolledo said.

Kim Kardashian: Hollywood is a mobile game whose record-setting success created an entirely new genre in casual games: the celebrity-branded game. Launched in 2014, the game has been downloaded over 28 million times and played for over 11 billion minutes. 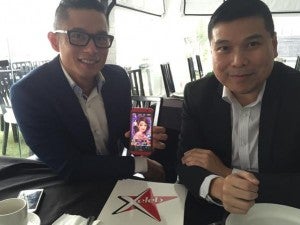 For Xeleb, the first product “Anne Galing” is a Match-3 game similar to Candy Crush and is available on Google Play. This is the first of many Anne Curtis-branded games to be rolled out by Xeleb, which will also launch other games based on the personas of other celebrity partners.

The game can be downloaded on the mobile phone for free but access costs gamers P5 per day.

“We view Anne, Isabelle, Kim and Erwan as tentpole properties. We’ll build a constantly growing portfolio of games based on their celebrity brand,” Racaza said. “The four celebrity shareholders will also help Xeleb expand its network of stars. Xeleb will own the celebrity games space.”

Xeleb was incorporated with a paid-in capital of P20 million of which P5 million had been subscribed and paid up. Curtis, who will sit on the board, has a 14 percent stake and will sit on the board while Isabelle Daza and Kim Atienza own 8 percent each. Erwan Heussaff owns 3 percent.

“The investment will expand and contribute to Xurpas’ current portfolio of mobile content and services and therefore, strengthen its competitive edge locally. It is also seen to contribute greatly to Xurpas’ revenues,” Xurpas disclosed to the Philippine Stock Exchange.

Xurpas has committed a total of P395-million for new investments, leaving it with P895 million to spend on further expansion. In the first quarter of 2015, Xurpas revenues grew by 52 percent year-on-year to P132.23 million, driven by the strong growth of its core mobile consumer and mobile enterprise businesses.