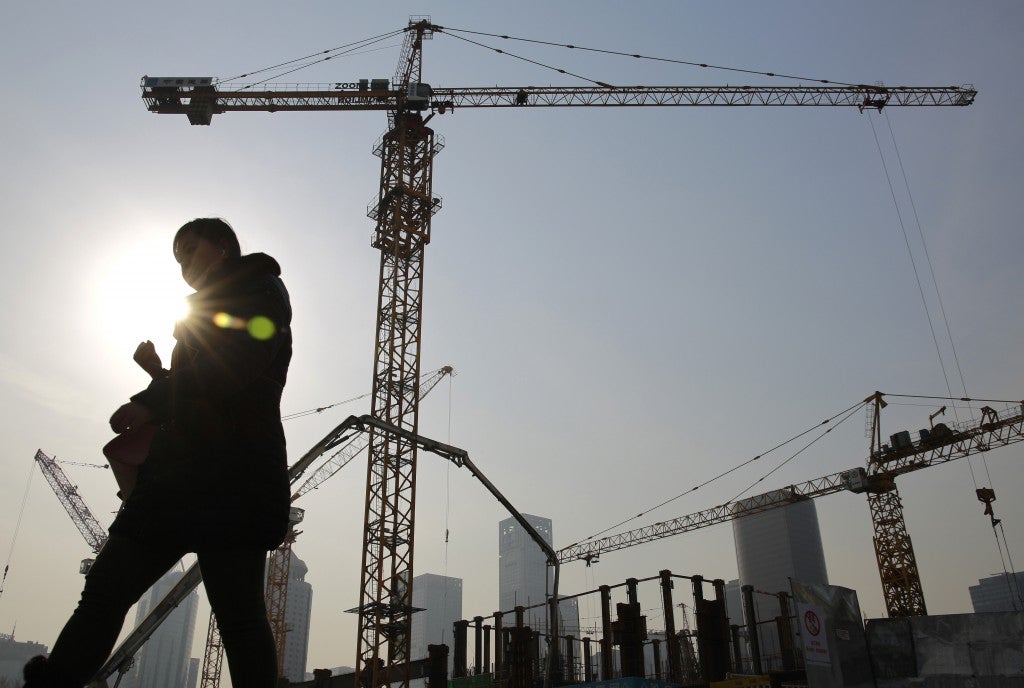 A woman walks past a construction site at the Central Business District of Beijing, China Tuesday, Jan. 20, 2015. China’s economic growth was flat at 7 percent in the second quarter from the previous one. AP

The gross domestic product figure announced by the National Bureau of Statistics matched the 7.0 percent expansion in the first three months of this year, and exceeded the median forecast of 6.9 percent in an AFP survey of 14 economists.

The figure is in line with the government’s official target for GDP growth this year of “about 7.0 percent”.

It has largely failed to pick up momentum this year and its growth slowdown has been a major factor in a global fall in commodity prices.

“We must be aware that the domestic and external economic conditions are still complicated, the global economic recovery is slow and tortuous and the foundation for the stabilization of China’s economy needs to be further consolidated,” NBS spokesman Sheng Laiyun said.

But he added: “The major indicators of the second quarter showed that the growth was stabilized and ready to pick up, the economy developed with positive changes and the vitality of the economic development was strengthened.”

Chaotic trading on the country’s key stock markets in recent weeks has added to uncertainty for China’s financial system which faces challenges including indebtedness and an opaque “shadow banking” sector.

It was ahead of a median forecast for 6.0 percent expansion in a survey of economists by Bloomberg News.

Retail sales, a key indicator of consumer spending, increased 10.6 percent last month from the year before, the NBS said, a faster pace than May’s 10.1 percent.

And fixed asset investment, a measure of government spending on infrastructure, expanded 11.4 percent in January-June year-on-year, the same as for the first five months of the year and remaining at its lowest since 2000.

Chinese authorities want investment to slow as part of their plan to diversify growth away from big-ticket projects — that helped drive years of double-digit GDP expansion — to consumer demand, which is seen as more sustainable.

But too fast a deceleration can be harmful to overall growth. Authorities have been taking preemptive steps since last November when the People’s Bank of China, the central bank, made the first of four cuts to benchmark interest rates.

It has also reduced bank reserve requirements in a bid to boost lending. Such measures can take time to affect growth.

China’s total trade declined in the first half of this year, official data showed Monday, falling well short of the government’s targets.