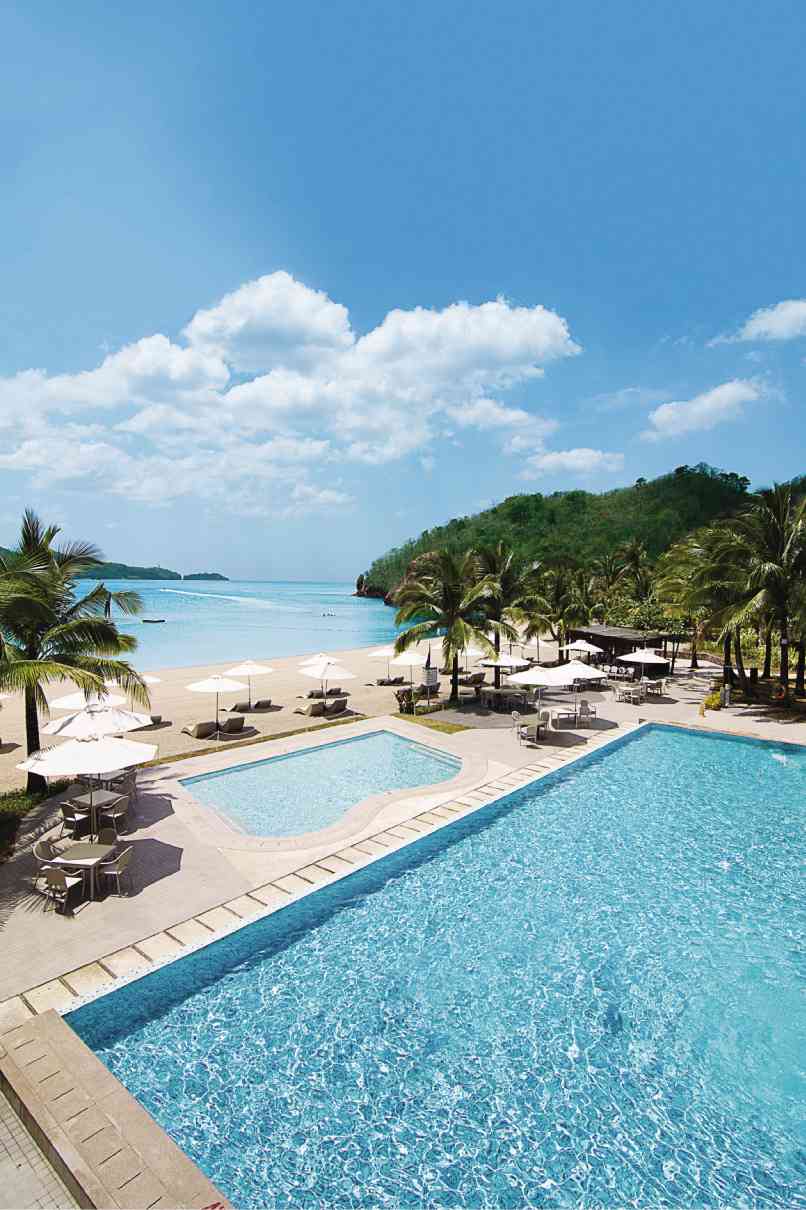 Developer Costa del Hamilo Inc., a subsidiary of SM Prime Holdings, has envisioned it as a select leisure destination and coastal residence.

At Pico de Loro Beach and Country Club, the first development of the 13 coves of Hamilo Coast, the security won’t let you in unless you a have a reservation at the hotel or own a condo unit in its community. As in any exclusive club, visitors must be endorsed by members.

It consists of condominiums and club facilities that are managed by Costa del Hamilo, while the hotel, Pico Sands, is run by SM Hotels and Conventions Inc.

“These two entities require different profit and loss financial statements. Majority of the shares belong to Costa del Hamilo, the owners of the land and the estate management company,” says August Samala, general manager for the beach and country club and the residences.

“The hotel is a locator in Pico de Loro. We have to coexist with the country club so guests can enjoy the facilities. Otherwise, Pico Sands will be just a regular hotel,” adds Magdalena Garcia, general manager of Pico Sands Hotel.

Both Samala and Garcia used to work for another luxury hotel brand.

“We both were exposed to a certain level of training and know the guest expectations. The standards are in our system. They can’t be shaken off,” says Garcia.

Samala and Garcia have worked their way up the ranks, accumulating a lot of experience that they can share with SM Group as it forays into tourism and hospitality. 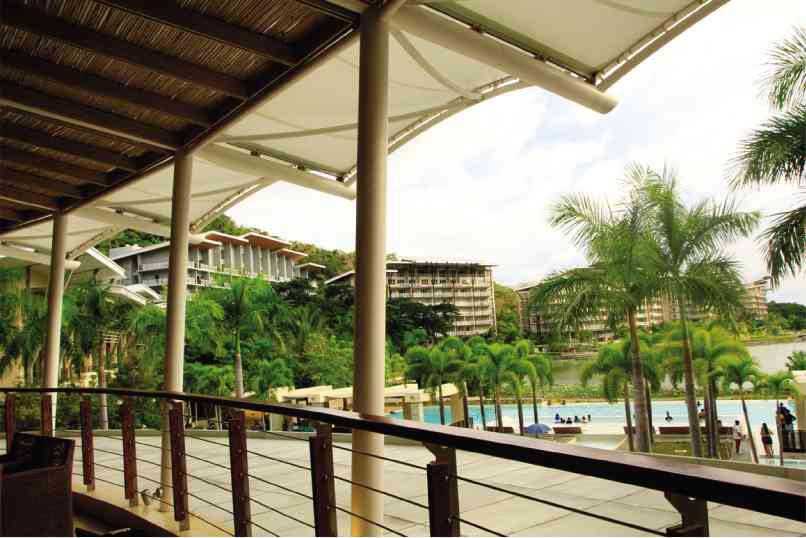 Samala was an electrical engineering student while working at a pizza chain in Greenbelt. His personable skills won the heart of a customer, who turned out to be a manager, and offered him a job at the newly opened Makati Shangri-La.

From 1994 to 2012, Samala worked his way up from page boy at the hotel’s main entrance to chief concierge, becoming a member of the prestigious Les Clefs d’Or, “The Golden Keys”—an international association of hotel concierges.

He received further training at the Shangri-La Academy in China, a facility that grooms its employees to higher management positions and was later promoted to front office manager.

After a fulfilling career with Shangri-La, he joined the opening team of Pangalusian, the most luxurious of El Nido Resorts, run by Ayala Hotels. He became the rotating resident manager in all its resorts.

During his first two weeks, Samala and an engineer toured the property, changing over a thousand light bulbs.

“We were oriented that if a single light bulb wasn’t working, then the place isn’t managed well,” he says.

As a solution to the erratic shuttle service around the property, Samala devised a loop with designated stops and schedule.

Then came the continuous upgrade of the food and service, enhancement of the staff’s communication skills, and the designation of one part of beach for members only.

“Members complain that they pay their dues and guests of nonmembers enter the club. I gave them each a place of their own. The Beach Club is exclusive for members,” says Samala.

Running the country club is more challenging, says Samala. In a hotel, guests follow the management hierarchy. Management’s interaction with guests is brief and the handling of complaints lasts half an hour.

In a club, the members who pay their share of P700,000 plus dues, must feel a sense of entitlement. When expectations are not met, they demand talking to the general manager.

“You need patience,” Samala says with a chuckle. “Guests don’t have anybody to express their concerns. They tell me their stories from what happened four years ago and why they bought shares. Sometimes I sit with them for one or two hours. Soon they become my friends.”

Pico de Loro only has 2,180 members, and it needs at least 4,000 members to make the business more profitable, says Samala.

But Samala remains optimistic. The business has been growing because of the rising number of visitors to the coast. The opening of the Kaybiang Tunnel has reduced travel time from SM Mall of Asia to Pico de Loro to 90 minutes.

Revenues are driven by membership and guest fees, while 40 percent comes from corporate and social events.

Samala underscores the importance of partnership with Pico Sands Hotel, which provides rooms for members who don’t own condos in the estate and for their guests.

“The corporate market trend is no longer limited to meetings. Groups are looking for outdoor and team-building activities. Pico de Loro is ideal because we have facilities unique to our property, excellent food, service, and the space—all of 40 hectares,” says Garcia.

“For the family market, children prefer the beach, and we have clean areas and wide expanse of beach for them to play.”

Garcia started out as a waitress at the now-defunct Philippine Village Hotel before transferring to the front desk. Garcia worked for the Sulo Group of Hotels, the Manila Hilton, which became Manila Pavilion, and Holiday Inn.

She was area director for sales and marketing at the Shangri-La in Bangkok and Chiang Mai. Later, she became resident manager of Shangri-La Boracay before moving on to Edsa Shangri-La.

In 2007, Garcia handled the Asean Summit in Cebu and the Asean Foreign Ministerial Meeting in Makati.

General managers are trained extensively in food and beverage, as well as rooms and operations.

“Today’s GMs are multifaceted. They must have a background in marketing and finance,” she says. “I tell my team never to refuse an opportunity to be transferred to another department. It will enable them to learn something new.”

When Garcia became part of Pico de Loro Beach and Country Club, she was delighted to see the staff working efficiently, exuding the desire to please guests.

“The foundation is there. It’s in the hearts of our staff who come from Nasugbu to improve their lives. Costa del Hamilo has helped the local communities by generating jobs,” she says, pointing out that 85 percent of hotel employees are from Batangas.

The hotelier takes pride in the development of Hamilo Coast, promoting sustainable, low-impact tourism by protecting the environment.

To improve services, she has added extra satellite counters to handle the guests checking in or out of the resort to lessen the queues on weekends, while speeding up room turnarounds.

“Somebody with exposure in the business must have that innate love for speaking to guests, listening and empathizing with them,” Garcia says.

Because of the continuing improvements, the hotel has been getting positive feedback about the food, maintenance and the staff who anticipate the needs of every guest.

Garcia adds that the hotel business has been thriving, striking a balance between earning high revenue and controlling expenses.

Garcia says that the resort industry has been growing, buoyed by the rise in domestic travel and a stronger economy.

“The consumer has more options today. We need to be stronger in the market. We need the children to bring their parents so they keep coming back.”

Leave it to Leni