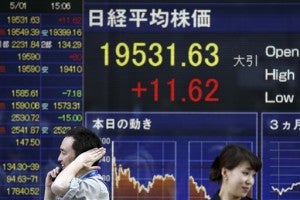 Pedestrians stand in front of an electronic stock board of a securities firm in Tokyo on May 1, 2015. Asian stocks Tuesday, May 5, reversed early gains, with China’s market taking fright and dropping more than four percent as new share issues raised the prospect of a sell-off.  AP PHOTO/EUGENE HOSHIKO

Hong Kong’s main index closed down 368.28 points, or 1.31 percent, at 27,755.54, tracking China stocks which fell sharply as the upcoming new issues raised the prospect of funds being diverted from existing equities.

“Today and tomorrow will be the peak for the latest round of IPOs so people may be selling down their holdings from the secondary market to use the money for IPO subscription,” Steven Leung, Hong Kong-based director of institutional sales at UOB Kay Hian, told Bloomberg News.

The Shanghai Composite has recorded an astonishing 118 percent gain over the past year, on expectations of further monetary easing in China.

Tokyo and Seoul were closed for holidays, but early trade elsewhere in Asia had been energized by Wall Street, which put in a strong performance Monday on news of the first rise in US factory orders for eight months.

The Dow gained 46.34 points, or 0.26 percent, to 18,070.40 after the Commerce Department said new orders for manufactured goods rose 2.1 percent in March, after seven straight months of declines.

The Australian bourse gyrated around the central bank’s rate decision to cut official rates to a record 2 percent from 2.25 percent, as it tries to tamp down the Aussie dollar and stoke economic growth to offset a downturn in the key mining sector.

“At today’s meeting, the board judged that the inflation outlook provided the opportunity for monetary policy to be eased further, so as to reinforce recent encouraging trends in household demand,” Reserve Bank of Australia governor Glenn Stevens said in a statement.

“Further depreciation seems both likely and necessary, particularly given the significant declines in key commodity prices,” he said.

The local unit eased to 77.88 US cents immediately after the decision but jumped back to over 79 US cents.

Analysts said the sharp rise reflected the market’s disappointment that the central bank did not include an easing bias in its statement, which could have pointed to further rate cuts.

The greenback was up against the euro and most other major Asian currencies in afternoon Asian trade on fresh expectations the US central bank may raise interest rates in the second half of the year.

Against the Japanese currency, the euro was changing hands at 133.68 yen from 133.92, but trade was thin with Tokyo markets closed.

US benchmark West Texas Intermediate for June delivery fell 12 cents to $58.81 while Brent crude for June eased 18 cents to $66.27 in afternoon trade.

Thailand was also closed for a holiday.