McDonald’s putting itself on a diet 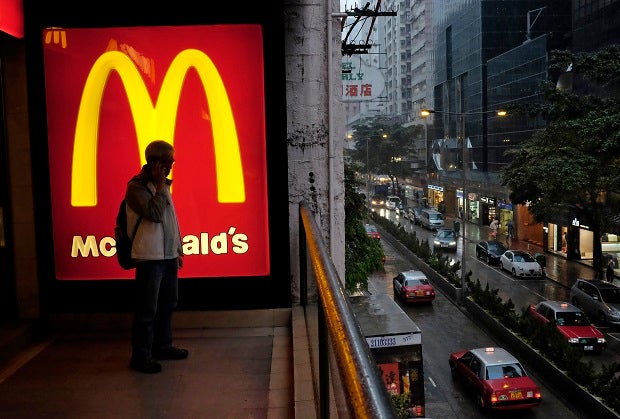 FILE – In this April 2, 2014, file photo, a man talks on a mobile phone next to a downtown McDonald’s in Hong Kong. McDonalds says a key global sales figure fell 2.2 percent in November 2014 as U.S. sales continue to soften and it contends with ongoing difficulties from a food-safety scandal in China. (AP Photo/Vincent Yu, File)

McDonald’s putting itself on a diet. It’s out with a desperately needed new strategy that includes cutting $300 million in costs.

Says McDonald’s CEO Steve Easterbrook: “The message is clear. We are not on our game.”

McDonald’s will sell 3,500 restaurants to franchisees by 2018, boosting global franchisee ownership from 81 percent to 90 percent.

The company will also re-organize into 4 units. The U.S., its largest segment with 40 percent of the company’s operating income.

International Lead Markets – established markets like Australia, Canada, and parts of Europe. High Growth Markets – ones with more room to grow, like China and Russia. and Foundational Markets, which will cover the remaining markets along with corporate activities.

McDonald’s also plans to return between $8 and $9 billion to shareholders this year. But investors didn’t like the taste of it all, the stock falling on Monday.

The strategy was criticized for its lack of details.

Dave Henkes of restaurant consulting firm Technomic says: “There wasn’t any talk about, you know, these announcements about breakfast, for example, or about, you know, menu innovation. There is a lot of franchisee disgruntlement, I think is a good word for it, about what they are going through. And I didn’t really hear about how they are going to reach out, and sort of fix those relationships.”

Separately, McDonald’s also announced the launch of a delivery service in New York City, a move, Henkes says, is one in the right direction.

McDonald’s to shutter 220 stores in China and US