McDonald’s to shutter 220 stores in China and US 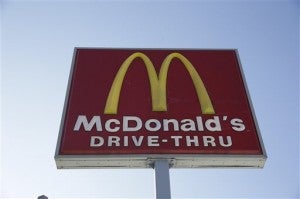 The  company  said  the  move  is  in  reaction  to  an  8.3  percent  slump  in  first-quarter  comparable sales  in  the  Asia  Pacific,  the  Middle  East  and  Africa,  which  it  blamed  on  the  impact  of  what  itcalled  prolonged,  broad-based  consumer  perception  issues  in  Japan,  and  negative  but improving  performance  in  China.

Analysts  said  customers  in  China  have  been  slow  to  forget  recent  food  scandals,  one  of which  involved  a  major  supplier  of  meat  to  fast-food  companies  including  McDonald’s  and Yum,  which  was  shut  down  for  allegedly  violating  numerous  safety  regulations,  including mixing  in  chicken  and  beef  parts  that  were  well  beyond  their  expiration  date.

Yum  has  launched  several  initiatives  to  attract  more  customers  in  China  including  a  high-end restaurant  Atto  Primo  in  Shanghai,  and  providing  quality  coffee  in  1,300  restaurants  across  10 cities.

Ben  Cavender,  principal  of  the  Shanghai-based  China  Market  Research,  said  he  expected both  brands  to  continue  to  struggle  in  China  and  internationally.

“This  is  due  to  changing  consumer  tastes  and  an  overall  shift  toward  either  more  healthy foods  or  niche  brands,”  said  Cavender.

Why McDonald’s is still a powerhouse, despite troubles